The anime adaptation for 86 might have just finished, but that doesn’t stop us from experiencing more of this series as Yen Press continue to release new light novels. Now we’re at the seventh volume, but does it continue to be a good read? Let’s find out!

Having captured The Merciless Queen (a high-ranking commanding unit for the Legion and the developer behind them) at the end of Volume 6, our cast has been through some tough times and are finally given a chance to take a vacation. Together, the Eighty-Sixth Strike Package visits a resort of sorts where they can bathe in comfort and take some well earned time to enjoy their lives away from the battlefield.

Perhaps more importantly, now that Shin and Lena are away from the battlefield, they have no excuse for not dealing with the growing feelings they have for one another. Feelings so obvious that the rest of the Eighty-Sixth Strike Package are getting more than a little fed up watching the two and begin to devise a plan to force them into confessing to one another.

This is one of the first volumes in the series to not include any time on the battlefield, which may be a disappointment for some but I think the opportunity this instalment gives for character growth is more than worth it.

Since Shin and Lena have spent substantial time together since they reunited in Volume 4 it’s obvious to the characters and reader alike that the two are in love. However, they’re both still kids with no experience when it comes to this kind of thing and on top of that, Lena can’t move past the fact her people did such horrible things to the 86 back in her homeland.

This creates an interesting set-up for the volume as Lena not only goes through the struggles of any teenage girl in love (worrying about changing their relationship or the fact she might lose Shin if he rejects her) but also the fact that she doesn’t feel as if she has the right to stand beside them. This is only made worse for her when she realises that in the two years the group were separated, the 86 made new friendships with people she knows nothing about. This in turn leads her to wonder if there isn’t someone more worthy of standing by Shin’s side.

The nice thing is that, rather than letting Lena stew in these emotions, author Asato Asato does a good job of dealing with them realistically. There are plenty of people around Lena who will tell her that her feelings are wrong and help guide her in the right direction, which is important for her growth. Be it her friend Annette or rival for Shin’s affections Kurena, the group are determined to make Lena realise that no matter her background, she belongs by their side as their “Princess”, to lead and protect them.

I also appreciate that we get to see Shin’s struggles as well. His feelings are less complicated than Lena’s (having worked through a lot of them in Volume 6), but I still enjoyed watching him squirm when it came to telling her how he feels. One of the most notable things about these scenes is the fact Shin has changed so much since the series began. Back in Volume 1, you’d never have thought the Headless Reaper would be in love, let alone thinking of confessing his feelings! Throughout this book, he also smiles and jokes a lot more than he would have back then, which is a testament to how much being away from the Republic of San Magnolia and around new people has allowed him to open up.

Having said all that, I think one of the best things about Volume 7 is Asato’s willingness to let the cast have fun. Throughout the book we find the group teasing one another, we even have some stereotypical embarrassment when they bathe together in a mixed bath. A lot of these scenes are outright hilarious, especially when Viktor is involved; while he’s in a similar age range to Lena and the group, he’s certainly more mature in how he acts. From pillow fights to fireworks, all the comfy slice-of-life elements you could dream of being present are here and seeing these characters act their age away from the troubles of war is extremely rewarding for us.

Of course, it’s not all fun and games since Shin is tasked with interrogating The Merciless Queen in a bid to figure out if there is a way to stop the Legion for good. This is certainly a less significant aspect of the novel overall, but it does set up well for the next big arc, which is all it needed to do. Now that the vacation is over, I’m looking forward to seeing what the future holds for the series, even if it’s likely to be filled with sadness as this story often is.

As previously mentioned, 86 Volume 7 comes to the West thanks to Yen Press and continues to be translated by Roman Lampert. The translation reads well with no issues to note. The illustrations this time around (by Shirabii) are notably nice too, although it’s a shame that while we get to see all the girls in swimsuits we don’t also get to see the boys beyond one smaller box in the bottom of that particular illustration. However, this can be forgiven, given the fact that Shirabii dedicates a two-page spread to one pivotal moment at the end of the book. Volume 8 of the series is currently scheduled for release in July, so not long to wait to find out what’s next!

Overall, 86 Volume 7 offers not only the cast but also us the chance to unwind and spend some time relaxing in between arcs. Coupled with some rewarding character development, this is a book we’ll be remembering for a while, even if it’s not set in the midst of a battlefield. 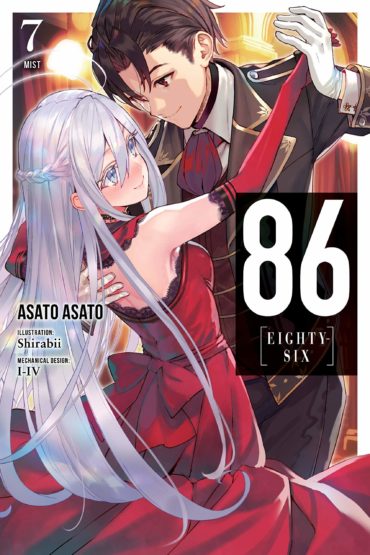