I’m sure many of our readers will be familiar with mangaka Kenjiro Hata, who found fame through Hayate the Combat Butler. Today I’m here to review the first volume of their current series, Fly Me to the Moon. Will it prove as memorable as Hayate? Let’s find out!

Our story follows Nasa Yuzaki, who is hit by a truck on the day of his high school entrance exams. Nasa has spent his life being bullied for his name and so to overcome this, he decides to put his all into studying so that people think of him, instead of outer space, when they see the name Nasa.

The reason our hero is hit by a truck is that he was distracted by a beautiful girl known as Tsukasa Tsukuyomi. It’s love at first sight for Nasa and when he’s hit by the incoming truck, Tsukasa jumps in to save him – further fuelling his feelings for her. Mysteriously, despite Nasa’s injuries and the fact that Tsukasa took the majority of the hit, there is barely a scratch on her.

Tsukasa calls an ambulance for Nasa and tells him to stay put, but Nasa feels that if he lets Tsukasa leave, she’ll disappear to some far-off place out of his reach, like Princess Kaguya. Despite his injuries, Nasa follows Tsukasa, ultimately confessing his feelings to her. Kaguya tells him that if he wants to date her then he must be prepared to marry her, to which Nasa readily agrees.

After this Nasa passes out from blood loss and awakes in the hospital to find that Tsukasa is nowhere to be seen. It’s not until a couple of years later that Tsukasa turns up on Nasa’s doorstep, ready to begin her married life with him!

What follows is a sweet story as the two turn in their marriage documents to the local government office and figure out how to live together. This includes shopping for bedding for Tsukasa, spending the night sleeping beside one another and eating breakfast together. They’re all everyday things that are somehow charming and refreshing to watch unfold between the two characters.

It’s difficult to put the allure of Fly Me to the Moon into words. When you describe the story after Tsukasa returns to Nasa’s life, it sounds like a whole load of nothing. The strength of it is certainly in Kenjiro Hata’s experience and how he conveys his story.

The artwork is simple but expressive. For the most part, pages are made up of fairly small panels with little background detail and just the upper body of the characters in focus, but that works surprisingly well. Pages are detailed when they need to be and otherwise, I think keeping distractions to the minimum helps the reader focus on the cast.

At heart, like Hayate the Combat Butler, the series is a slice-of-life comedy. While there is potentially a supernatural twist with Tsukasa to come, it emphasises everyday life before anything else. With Tsukasa, the unanswered question is who or what she is. The way she talks is mystical and the fact she survived to take the brunt of the truck in Nasa’s accident seems to suggest she might be some sort of supernatural being, but I suppose that’s a mystery that will be solved later in the series.

How much you get on with the series boils down to how much interest you have in the relationship between Tsukasa and Nasa. If you like the characters, then it’s an entertaining read, but otherwise, there isn’t a lot of substance here. That said, one thing I did appreciate is that the story moves along at a fairly quick pace and any given tale is usually wrapped up in one chapter before moving on to the next situation.

Fly Me to the Moon Volume 1 comes to the West thanks to Viz Media and has been translated by John Werry. The translation reads well with no issues to note. The series is ongoing in Japan at 12 volumes and VIZ has Volume 2 scheduled for an English release in December.

Overall, Fly Me to the Moon proves an entertaining slice-of-life series. With likeable characters and a charming story, it’s difficult to find fault with. How much you enjoy it will depend on how well you get on with the cast, but provided you do then there is fun to be had here. 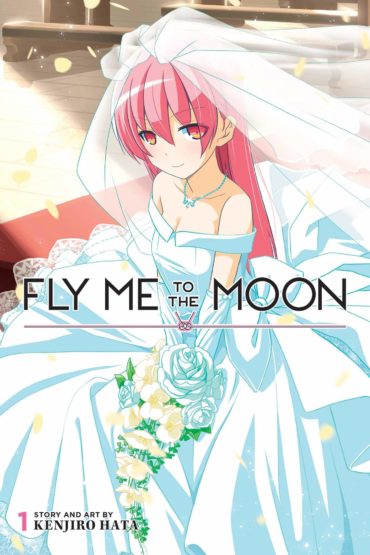 Title
Fly Me to the Moon Volume 1

Fly Me to the Moon Volume 2 Review

In the second volume of Fly Me to the Moon our newlyweds take a trip to the bathhouse! Plus Nasa gets kidnapped by his new sister-in-law – but that’s nothing when you’re married to the love of your life, right?