The Autumn anime season is in full swing and has brought with it the anime adaptation of Fly Me to the Moon (Tonikawa: Over the Moon for You). Whether you’ve gotten into the series through its anime or the manga, this romantic comedy continues to win the hearts of many. Today I’m here to take a look at Volume 2 of the manga to find out how our newlyweds are doing.

This instalment of the series begins with Nasa taking wife Tsukasa to the nearby bathhouse: The Bestest Most Famousest Bath Ever. Here our protagonist is hoping to sneak a peek at his wife getting out of the bath, but he also wants to introduce her to Aya and Kaname, two sisters whose father runs the bathhouse.

While Aya ends up mistakenly thinking Tsukasa is Nasa’s sister, Kaname is simply flabbergasted to see him with a girl at all! She’s further horrified to discover the two got married without even exchanging rings. After lecturing Tsukasa about the importance of giving Nasa a symbol of his love, he begins to wonder what would make his wife happy and what he can even afford.

Later in the volume, we meet Tsukasa’s sister, Chitose and her combat maid (yes you read that correctly, I said combat maid!). It seems Tsukasa neglected to tell her sister she was getting married and now Chitose is understandably upset. Having once been saved from tumbling off a sharp cliff, Chitose has vowed to dedicate her life to protecting Tsukasa and now she needs to make sure Nasa can be trusted to look after her dear sister.

Chitose even goes as far as to kidnap Nasa, hoping to use her combat maids to force him into cheating on Tsukasa. Then she’ll have everything she needs to break the two of them up. However, this kidnapping gives Nasa the perfect opportunity to learn more about his wife and reaffirm his feelings for her.

While the first volume of Fly Me to the Moon was mostly light-hearted comedy based around the new couple, this book isn’t afraid to lean more heavily into the fantastical elements author Kenjiro Hata is known for. Especially when you consider the combat maids, who would have felt right at home in Hayate the Combat Butler (which they’re probably a reference to).

I’m also glad that Hata took the opportunity to introduce more characters into the series. While there wasn’t anything particularly wrong with focusing on Nasa and Tsukasa I did wonder if the jokes would run out sooner rather than later if it stuck to that approach. While it’s still a bit early to gauge how interesting Aya, Kaname and Chitose will be in the long run, for now, they offer a welcome change of pace.

If nothing else, it’s nice to have more of a variation in terms of the stories. Now we have the simpler day-to-day lives of the characters as well as the more dramatic storylines that are unfolding around them. This also leads to more interesting artwork as the cast are doing more than just standing around talking. Panels are still relatively small, but Hata makes better use of the space here than in Volume 1.

I will say that if you didn’t like the first volume of Fly Me to the Moon, then this one is unlikely to change your mind. While there is more happening, it still follows similar story beats and doesn’t have a great deal of substance. It’s not a problem if you like what’s on offer, but if you were hoping for any kind of improvement going into Volume 2, then that’s just not here.

Fly Me to the Moon Volume 2 comes to the West thanks to VIZ Media. The translation reads well with no problems to speak of, although I’m not sure if John Werry continued working on the series or not since they go unnamed in the review materials provided. As mentioned earlier, the anime adaptation of the series is now airing and is available to stream on Crunchyroll. VIZ has Volume 3 of the series scheduled for release in January.

Overall, Fly Me to the Moon continues to offer an entertaining and often charming read. With more variation in both stories and characters, this instalment proves that the series has a lot of room for growth. I’m certainly looking forward to seeing where it ends up. 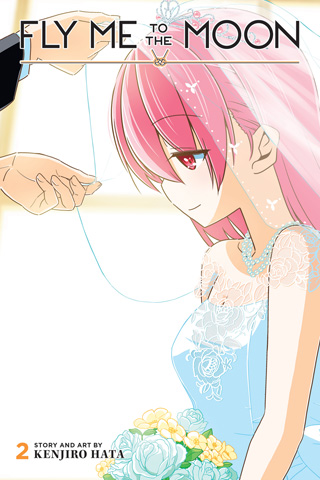 Title
Fly Me to the Moon Volume 2

Fly Me to the Moon Volume 1 Review

Kenjiro Hata is back with a brand-new series, Fly Me to the Moon! A boy meets girl story with a twist, where our protagonist ends up agreeing to marriage on his first meeting with the heroine. But does the series live up to Hayate the Combat Butler which the creator is famous for?