When Yen Press licensed The Eminence in Shadow light novel series, the community was very excited. It’s safe to say that the books have a bit of a cult following and today I’m here to find out if the story is as good as the hype made it out to be.

The story follows Cid Kagenoh, who has always felt a deep appreciation for ‘shadowbrokers’ (or an eminence in shadow as Cid calls them), those who are the masterminds behind some great scheme: the type of person who is secretly pulling the strings and fighting against a great evil. Of course, living in modern-day Japan means Cid can never become a shadowbroker himself, but nevertheless he trains his body in the hopes of awakening to some mystical power that will allow him to accomplish this dream.

Unfortunately, Cid is hit by a truck and killed before he can achieve this. Luckily he’s reborn in another world, one filled with magic which proves to be the perfect place for our hero to live out his desires! Now Cid trains anew to become the leader of The Shadow Garden, his secret organisation.

Once Cid grows older, he begins taking down petty thieves and those looking to harm the townspeople. One day he saves a girl whom he calls Alpha. Now with another member in his organisation, Cid thinks up a whole backstory as the reason for The Shadow Garden existing. This story includes heroes, a demon lord and an evil cult now trying to resurrect the demon lord. This is just a story Cid makes up as he goes along, but little does he know it’s all true!

As The Shadow Garden grows and gains more members (all named after the Greek alphabet), Cid simply thinks they’re playing along with his imaginary story. In reality, the organisation and its members are fighting against an evil cult and the whole world could be in trouble if the demon lord is brought back to life.

If you’ve read this far then you’ll probably have noticed that The Eminence in Shadow is at least partly a comedy series. It’s also your bog-standard reincarnation plot with an overpowered main character (Cid is certainly in no danger of losing to anyone!), which has certainly been overdone by now.

While the secret organisation twist is a relatively fresh take on the genre (at least in the English market), the problem is that The Eminence in Shadow is not a good read. It’s not written particularly well and that makes it hard to care about any of the characters or the situations they find themselves in. This is especially true of Cid who gets zero development throughout Volume 1 and yet has girls falling for him left and right.

Alpha and the other members of The Shadow Garden have the potential to be interesting, but it’s difficult to look past how infatuated they are with Cid for no reason. They think he’s smart and sees through the enemies’ plot better than they can, but everything Cid guesses right is simply a fluke.

Even when the book changes setting to Cid attending an academy, he has a princess falling for him as well as a scientist. Since Cid is trying to play the role of a ‘minor character’, this frustrated me even more since he’s doing nothing to earn these girls’ affections.

Even if we put aside the characters and setting, author Daisuke Aizawa’s comedy falls flat. I admittedly like the idea of a ragtag group of characters facing off against some great evil and the fact Cid has made all this up, unaware that the cult exists should be funny. It should be entertaining in the same vein as Natsume Akatsuki’s Combatants Will Be Dispatched! or Tsukikage’s Defeating the Demon Lord’s a Cinch, but it’s boring.

Battle scenes amount to Cid finding an enemy and killing them in one shot. His interactions with other characters are repetitive, usually involving a dialogue about what the cult is up to and Cid jumping to a conclusion that ends up being correct. No matter what Cid does, he never makes a mistake and honestly, he should have been the butt of at least some of the jokes.

One positive I will note for the book is that the illustrations are very nice. Handled by Touzai (Saving 80,000 Gold in Another World for my Retirement, Why Shouldn’t a Detestable Demon Lord Fall in Love?!), the images capture the cloak and dagger aura of The Shadow Garden members well. The character designs are very detailed, too, which helps build up a solid mental image of them.

The Eminence in Shadow comes to the West has been translated by Kristi Fernandez. The translation reads well with no issues to note, although it is worth mentioning that Volume 2 onwards is changing hands to Nathaniel Hiroshi Thrasher. The release itself is a hardback with some colour pages at the front. I appreciate what Yen Press have done with the logo design which fades into shadow toward the end of the title. The series is on-going in Japan at three volumes and Yen currently have Volume 2 scheduled for an English release in October.

Overall, The Eminence in Shadow is a comedy that simply isn’t funny. There is an interesting premise here but the writing isn’t good enough to back it up. When there are much better light novels on the market, it becomes very difficult to recommend this one to anyone, especially given the hardback nature of the release makes it expensive. 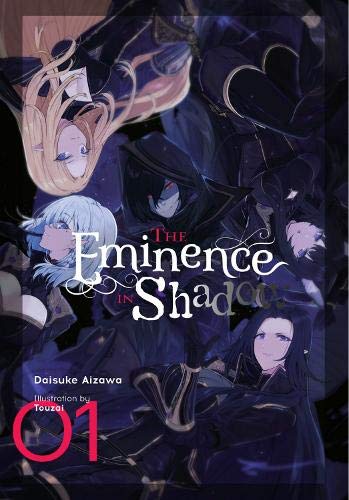 Title
The Eminence in Shadow Volume 1