This novel series’ writer Ryohgo Narita (of Durarara!! and Baccano! fame) and original manga creator Tite Kubo both talk in the back of the book about storylines and plots that were left out of the original manga and how the former was shocked that certain things were never revealed, apparently then asking if he could cover them in his book about Shuhei Hisagi, leading to the creation of this lore-heaving tome. After two books of teasing and slow reveals about the Shinigami whom Kaname Tosen, Hisagi’s old mentor and Captain, hated so much, we still didn’t learn a lot of this new information. Well, I’m happy to tell you it all gets laid out on the line here as the book kicks off with what it teased at the end of the previous volume: the Bankai of Shinji Hirako, something that was planned and designed but never shown in the original manga run. Thankfully not only is it great to see (it’s one of the illustrations by Tite Kubo) but it also makes perfect sense as to why he never used it before as it affects friends and foes alike, so he could only use it when no allies were around. Good fun.

The story then drives forward as a group consisting of Shinigami led by Head Captain Kyoraku and various Arrancar and enslaved Quincy all arrive at the other-dimensional home of the books’ antagonist Tokinada Tsunayashiro while at the same time Shuhei arrives there, thanks to meetings with Tokinada’s other allies in Fullbringer Aura Michibane (who gets a pretty unpleasant backstory) and the child-like, genderless and unwaveringly loyal Hikone Ubuginu who we find out has been experimented on to have a mix of Shinigami, Hollow, Quincy and Fullbringer blood, much like manga protagonist Ichigo, all so it can become the next Soul King. Now this is where the book really becomes important because it eventually reveals the history of the Soul King, what exactly it is and why its existence bothered people like Aizen and Urahara so much that they each created all-powerful Hogyoku orbs to do something about it. I won’t spoil it (plus it would take a few paragraphs…) but it’s interesting and pulls back the curtain on the very creation of Soul Society as we know it and why five “noble families” ended up in control. Why was such important information not included in the manga? Kubo says in the back pages that he planned it all out but didn’t use it because the story was “about Ichigo and his friends” and he couldn’t fit it in. Well… odd decision, especially given how much of the manga didn’t feature Ichigo and his friends at all, but I’m happy Ryohgo Narita sat down with him, found it out and made sure to write it into the novel.

The rest the book ties up the story of Tokinada, Hikone and Aura, plus you won’t be surprised to find out that we see Hisagi’s Bankai as well, unless you thought the two books leading up to this one frequently mentioning the scene in the manga where he was training to use it wasn’t leading to it finally being revealed (once again with an illustration!). Kubo again admits that much like Shinji’s Bankai, Hisagi’s was designed but not used, and that makes sense, given the aforementioned scene in the manga specifically setting it up. The book ends with a little bit of extra story of Kaname that ties neatly into his death scene back in the manga, plus a nice “things return to normal” epilogue. Once again, if you don’t know Bleach quite intimately, then you’ll be lost, but then if you haven’t read Volumes 1 and 2 you’d be even more lost, so I imagine if you’re on board with Volume 3, that won’t be an issue!

The book clocks in at 390 pages, nicely in-between the first book’s 276 and the second volume’s hefty 516. The translation is once again handled by Jan Mitsuko Cash and is perfectly fine, with the description of Hisagi’s Bankai and its odd rules are now perfectly visualised in my head, showing that she’s managed the task of translating the original work very well indeed.

Bleach: Can’t Fear Your Own World’s final third is an exciting read, full of action and plenty of Bleach lore finally laid out on the table, adding technically not needed but very welcome context to the series as a whole. It’s a full recommendation to Bleach fans, but honestly, looking at the project as one 1,182-page book, as the chapter numbers following on across each book reveal is very much the case, I can’t say it’s well-paced or an easy read leading up to this finale… 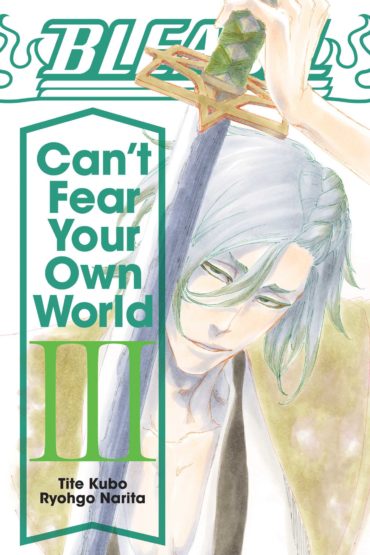