Twittering Birds Never Fly – The Clouds Gather, a “classic noir mixed with stark eroticism”, will be released in the United Kingdom and other territories as a limited-time premium digital release from 11 December 2020, the film’s distributor Sentai Filmworks has announced.

Twittering Birds Never Fly ~ the clouds gather ~, introduces two steely members of the Yakuza, each with secrets in their past, who occupy trusted and feared positions in the Japanese underworld. Recent parolee, Doumeki, is assigned to guard Yashiro, a mid-level enforcer who deals out daily doses of coercion, retribution and other criminal acts with brutal efficiency. But behind closed doors, their relationship quickly becomes psychologically and physically complicated. Theirs is a story entanglement, tension, power and control. Visually stunning and highly visceral, Twittering Birds Never Fly ~ the clouds gather ~ is a gritty take on classic noir mixed with stark eroticism. And as much as it leaves its characters forever changed, so too will audiences find themselves transfixed by Twittering Birds Never Fly.

Like Sentai Filmworks’ digital release of Made in Abyss: Dawn of the Deep Soul in September, the film will be available via the Eventive service, this time for $12.99. The film will be available to view from 6:00am BST on Friday 11th December 2020, after which, you will have 7 days to start watching the film, and once you begin, you will have 24 hours to finish. You can watch the film via your laptop or PC via the internet browser, Android devices using Chrome, and iPhones and iPads running Safari. If you’re looking to experience the film through your home cinema system, Eventive have apps for Apple TV and Roku, and the service supports Chromecast for Android devices, while Air Play is supported for iOS. You can find more technical information on Eventive’s website. Twittering Birds Never Fly – The Clouds Gather will be available in the United Kingdom, Republic of Ireland, United States of America, Canada, Mexico, Australia, and New Zealand.

In addition, Sentai Filmworks and Eventive are also currently hosting a digital release for BanG Dream! FILM LIVE for the same price in the above regions, in addition to the Netherlands, Spain, and Portugal. The film is directed by Shin Kitada (Aikatsu! CG director) at SANZIGEN Animation Studio (Sakura Wars: The Animation).

It’s here! The big concert! Kasumi Toyama, the girl who followed the trail of golden stars and heard the call of the Star Beat, and her friends/bandmates Saya, Tae, Rimi and Arisa, are now poised on the edge of stardom themselves as they prepare for a massive outdoor concert! It’s a huge venue to fill, but fortunately Poppin’Party won’t be the only band taking the stage during this major musical event. It’s a non-stop wall of J-Pop fun as Afterglow, Pastel Palettes, Roselia, and Hello, Happy World! all join the ladies of Poppin’Party, and while they’re all still competing against each other, the real winners are the lucky members of the audience! So, what are you waiting for? Your backstage pass is waiting at the hottest show in town – BANG DREAM LIVE! THE MOVIE!

If neither of those strike your fancy, Sentai Filmworks are also offering virtual screenings of Aragne: Sign of Vermillion, an anime horror movie that stars Kana Hanazawa, and was created by Saku Sakamoto, who wrote, directed, scored and animated the film by himself following a successful Kickstarter campaign.

“Rin’s new apartment building is a far cry from the sunny, idyllic photos from the rental brochure. Instead of offering sanctuary from a dangerous world outside, it oozes decay and dread. Residents exhibit unsettling, peculiar qualities and grotesque eruptions. Sinister forces seem to lie around every corner, and if Rin wants to survive, she will have to discover the terrifying truth — one she has kept buried within…”

Twittering Birds Never Fly – The Clouds Gather is directed by Kaori Makita (Yuri!!! On Ice episode 12). It is also the first production by Fuji TV’s Blue Lynx label, and the first feature film by animation studio Grizzly, who will both exclusively make Boys’ Love anime. The original manga by Kou Yoneda is published in English digitally by Juné, who plan on releasing the series’ fourth volume this December. All three seasons of the BanG Dream! anime series, and the OVA, are currently streaming on HIDIVE. 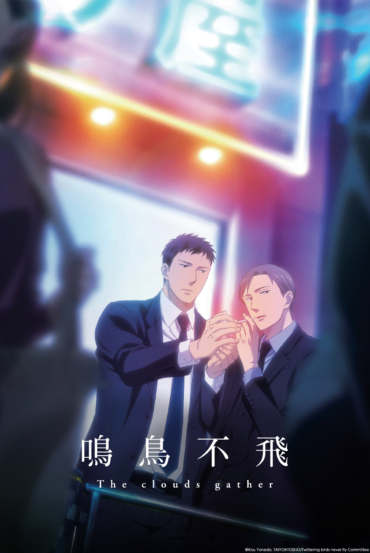