There are many things to be said about Dr. Stone, although on a personal level one of those things is: “Does anyone else, when reading that title, first think of Father Stone from Father Ted?” I’m half expecting someone to break a deathly dull silence by going to the main character, Senku, ask if he wants anything, and get the reply: “No, I’m fine”, before everyone falls silent again.

Dr. Stone also has deathly dull silence, but for an even more grim reason than a boring priest paying a visit. The series begins with two teenage schoolkids: the brawny Taiju, and his best friend Senku, a super-intelligent scientist. No mention is made of Senku’s IQ, but as he often exaggerates that there is a “10 billion percent” change of something happening, or something is a “10 billion to one” possibility, an IQ of 10 billion won’t seem to be amiss. Taiju tells Senku that he is finally going to confess his love to the girl he has been obsessed with for the last five years, Yuzuriha. The couple meet under a camphor tree in the school grounds, but just as Taiju is about to reveal all, a strange light appears in the sky, shining all over the world. Taiju stands to protect Yuzuhira from it, but he is powerless. The light has the same effect on everyone on Earth: it petrifies the entire population. Every last human being is turned into stone.

However, not every human dies. Taiju realises that he is still conscious. He thinks of Yuzuhira and still wanting to confess his love keeps him alive in his stone shell as the years pass. Even being swept away by flood waters as all of civilisation collapses does not stop him. Eventually, the stone cracks and he is freed. Yuzuhira remains safe as the camphor tree she was under protected her, but when Taiju goes to check, he spots that someone has left a message for him in the bark. Taiju eventually discovers the message is from Senku, who has also broken free from his shell. 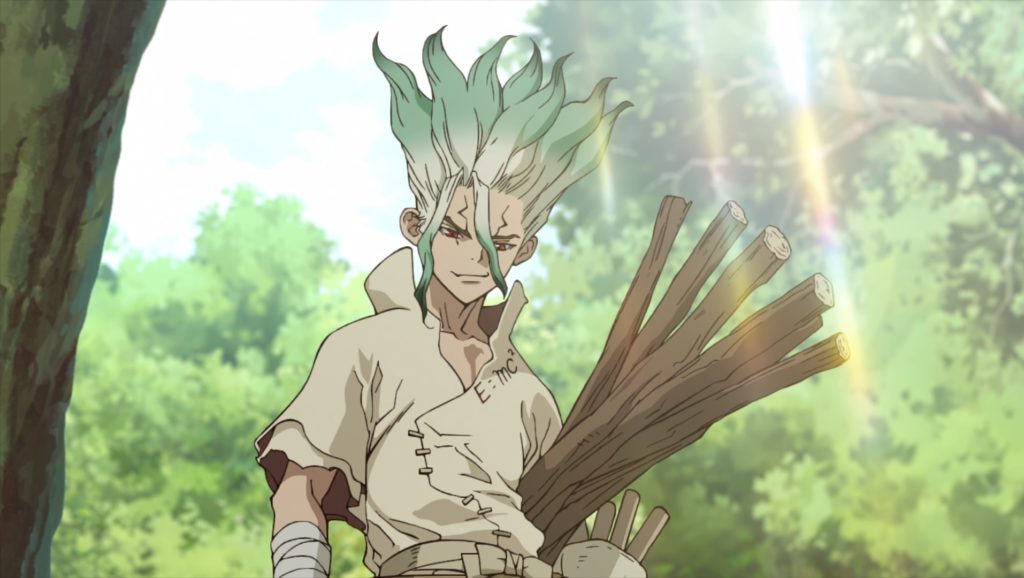 Senku, who kept himself conscious by counting the seconds that passed as he petrified, has calculated that the date is now 5th October 5738. Senku is now using his extensive scientific knowledge to find a way to free more people, to find the cause of the mysterious stone-creating light and ultimately to use the power of science to restart civilisation, with Taiju doing the physical labour.

The original plans involve freeing Yuzuhira, but a change has to be made when Senku and Taiju are attacked by lions, which are now native to Japan after lions in the zoos were able to escape when civilisation collapsed. So the first person they free is Tsukasa, “The Strongest Primate High Schooler”, a martial artist who is able to kill the lions easily, and who then hunts animals for food. However, Senku realises they have made a mistake freeing him, because Tsukasa has a hatred of adults and believes they do more harm to the world. Tsukasa has been destroying stone adults and plans to make a world purely of kind-hearted children. And so a battle begins between the two of them.

Eventually Yuzuhira is freed; with her, Senku and Taiju unite to stop Tsukasa, using the power of science in the hope of creating better weapons. Following a battle in which Senku tricks Tsukasa into thinking he’s dead, Taiku and Yuzuhira decide to act as spies and gain information about Tsukasa. Meanwhile, Senku learns that there are other people alive in this world when he comes across a village. He starts gathering some of the locals (depicted on the front cover of this collection) to form his own “Kingdom of Science”. 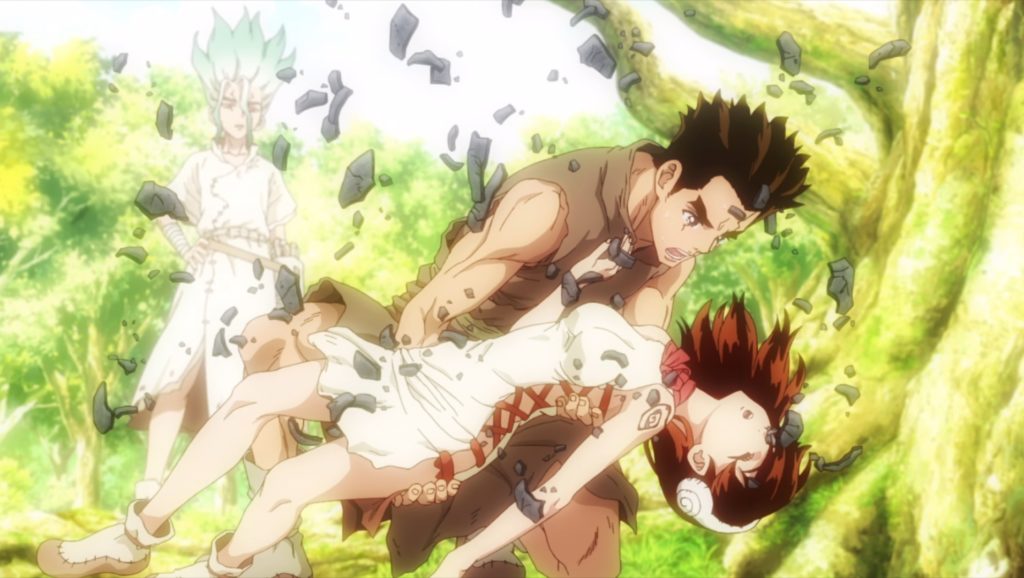 While admittedly the premise of a strange light petrifying the world is a nonsensical one, it is the plot that is the main appeal of Dr. Stone. We already establish the main rival factions early on, and quickly build up the characters as the story makes rapid pace. However, given that Taiju and Yuzuhira only appear in the first half of this collection, it might be said that the pace is too rapid for them.

Many of the more interesting characters appear in the second half, as Senku establishes the Kingdom of Science, and starts recruiting the people of the nearby village. These include Kohaku, a girl who battles Tsukasa and is later saved by Senku when a tree falls on her; Chrome, this world’s version of a scientist (i.e. sorcerer) who has collected all kinds of useful materials that Senku can use for his plans and Suika, a girl who wears a watermelon rind over her head to conceal the fact she has the “fuzzy eye illness”. Senku deducts she is short-sighted, and is able to make glass lenses for her eyeholes so her watermelon now acts like spectacles.

The manga is also surprisingly practical, as it deals with proper scientific concepts and teaches the reader how to create basic things. This results in one particular problem for Dr. Stone however, which is evidenced by the need for each episode to display a warning telling people about the dangers of trying to recreate the experiments they see on screen. This is understandable. This is a 12-rated anime which features how to make wine and gunpowder, while one of the major stories in the second half is about trying to help Kohaku’s ill sister Ruri by creating antibiotics, which involves having to use sulphuric acid. 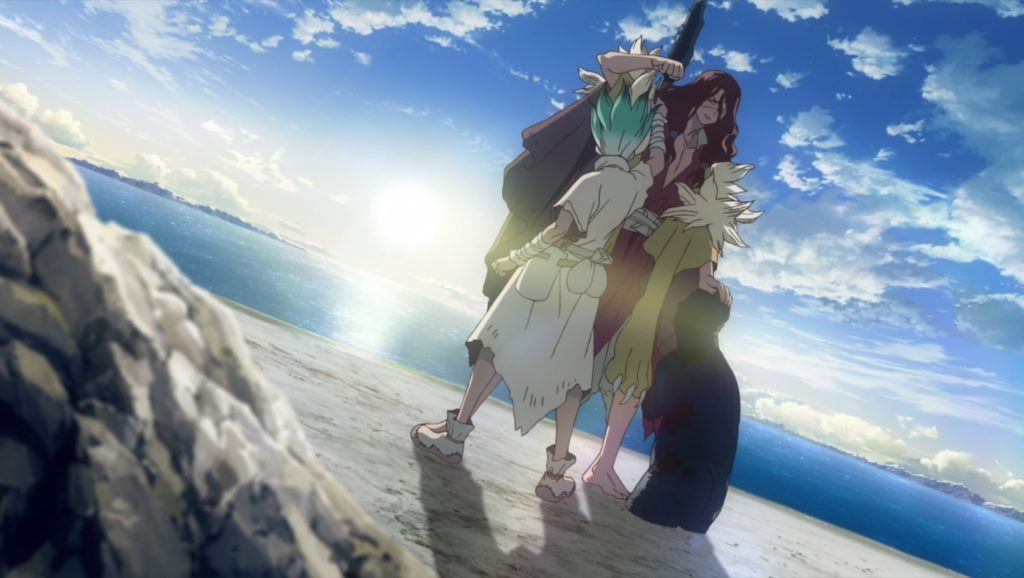 There are some issues that ought to be pointed out, like the design of Senku’s character. He appears to fit into that category of: “Anime and manga characters who are clearly the lead because they have crazy hair.” His tall column of nearly white hair with strands hanging down make him a decent rival with Yu-Gi-Oh! lead Yugi Moto in terms of people whose hair just looks ridiculous in any other context.

There is also something up with the subtitles. I’ve written Senku’s name as it appears in the subtitles throughout this collection. This is odd because there is a series of flashbacks to Senku’s younger days where he is experimenting with rockets, all of which are named after him. However, the name that is clearly written on them is “Senkuu”. It appears his name should be written as Senkū if we are being strict with romaji, but given that the name is animated as “Senkuu”, why not stick with that spelling?

Given these subtitle issues, it is worth talking about the voice acting. The Japanese voice acting is perfectly reasonable, while the English dub is actually fine. Aaron Dismuke as Senku, Ricco Fajardo as Taiju and Brittany Lauda as Yuzuriha play their roles well. It is certainly a dub I intend to examine more as the second part of this collection will be released soon, as well as the second series of the anime which airs in January. You will be able to hear them more in the two episode commentaries that come in this collection. The other extras are textless opening and closing. Out of the two, I found the ending, “Life” by Rude-a to be more enjoyable than the opening, “Good Morning World” by Burnout Syndromes.

Dr. Stone has certainly been enjoyable so far and I’m looking forward to see how it will progress. 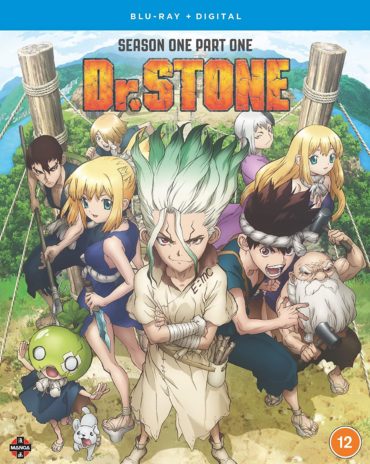