In the post-apocalyptic future in which the human population has been turned into stone by a strange light, a group of three survivors, scientific genius Senku Ishigami, his friend Taiju Oki, and Taiju’s love Yuzuriha Ogawa, have gone their separate ways in their efforts to put a stop to the brutish Tsukasa Shishio. Senku is trying to found a land based on science and hopes to revive all of humanity, while Tsukasa only wants to save the strong and the children, while destroying the statues of adults.

The plan is for Taiju and Yuzuriha to act as spies, while Senku makes contact with another group of humans who were not petrified and who live in a village. He manages to persuade some of these people to join his Empire of Science. These people are: Kohaku, a warrior whose life Senku saves when a tree lands on her; Chrome, a self-proclaimed sorcerer and collector of precious materials who ends up embracing the ways of science; Suika, a young girl who wears a watermelon rind to help with her “fuzzy sickness”, which is cured by Senku when he learns she is actually short-sighted and helps make glasses for her; the strict guard Kinro and the slacker guard Ginro; and Kaseki, an old but muscular craftsman. They are also joined by another man, Gen Asagiri, a petrified mentalist freed by Tsukasa as he wanted him to check if Senku was dead, but Gen decides to swap sides and join Senku. 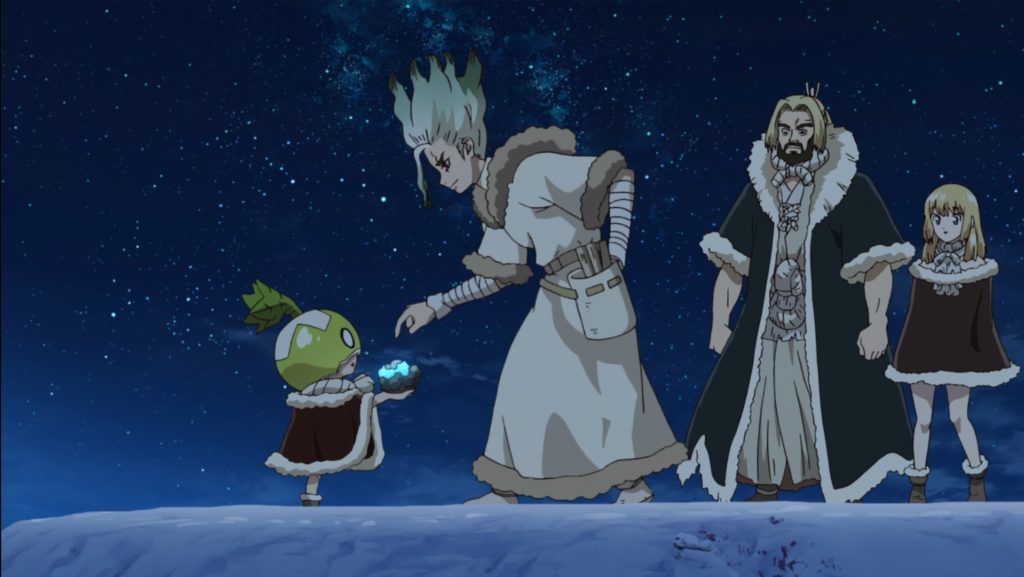 Currently, Senku is trying to get more of the villagers to join his Empire, and also helping Kohaku to achieve her wish of curing her sister Ruri, the village’s high priestess, from a mystery illness. Senku has thus been trying to create the right drugs in order to help her. It turns out that some of the ingredients can be gained by winning the village’s “Great Bout”, the winner becoming the new head of the village and also gaining Ruri as their bride. A mixture of strength, luck, and scientific innovations results in Senku winning the bout, at which point he immediately divorces Ruri, but happily takes over the village and gains the items he needs to help Ruri recover from what turns out to be pneumonia.

Senku however is shocked to discover the village’s name: Ishigami, his own surname. Ruri then tells him one of “The Hundred Tales”, passed down from generations of high priestesses, which reveal why this village of humans exists. It turns out that there were six human survivors of the light: the astronauts on the International Space Station, one of whom was Senku’s adoptive father Byakuya. They managed to land on Earth, with all six reaching a remote island where they lived out their lives, and the entire village is descended from these six people.

Following this, Senku continues to use everyone in the village to prepare for oncoming fight with the Tsukasa Empire, with the rest of the series seeing them develop more technology to prepare for what is to come, including hydroelectricity, artificial light, katanas, and their ultimate weapon: the mobile phone. 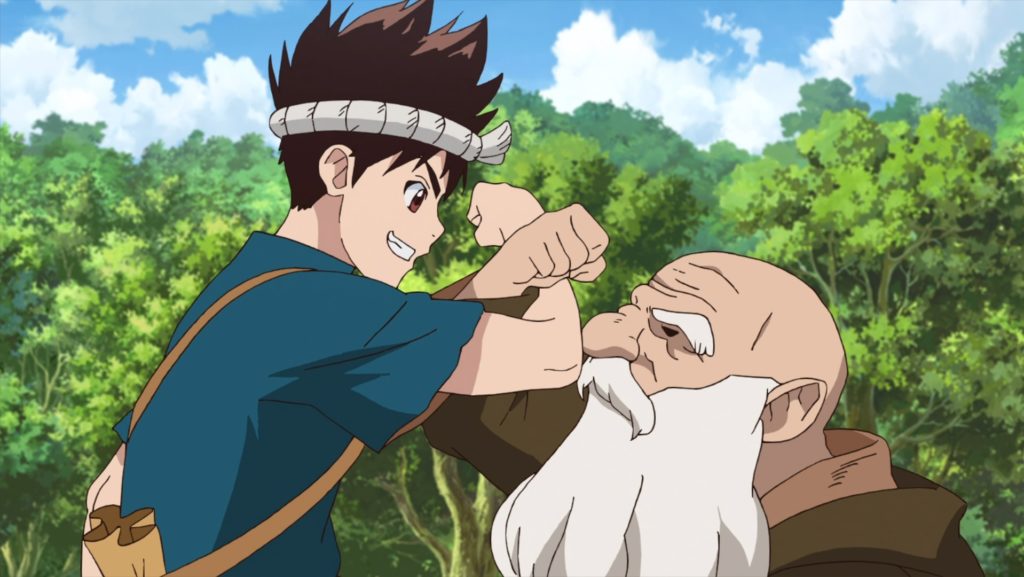 This collection feels more like a run-up to the forthcoming second anime series, the “Stone Wars” arc, which begins airing in January 2021. We know that more action is due soon, but in these episodes we still get action. We start off with the Grand Bout, and later episodes see some of Tsukasa’s forces make an attack on Ishigami Village.

However, the science is still the main focus of the show, as well as the characters involved. The villagers are generally an entertaining group: Chrome as Senku’s assistant provides a useful comic foil; Kohaku is the main action-focused character, but not the only one, thanks to the guards, although more humour comes from cowardly Ginro; cheerful Suika and buff Kaseki also add to the comedy; while Gen provides both some darker humour as well as a key link to Senku’s past as the only other member of the group to have turned into stone.

Another thing to bring up is both the subbed and dubbed versions of Dr. Stone. I mentioned in the review of Part 1 that both versions have their plus points, but I had only listened to part of the English dub when I wrote the review. I have since listed to both versions in full. As I mentioned, the dub is done rather well. I still prefer the sub, but this is one of the few dubs that I can comfortably listen to. Both however do have some small issues however. As mentioned, the subtitled version uses some different spellings of names compared to how the names are actually written in the anime. The dub meanwhile has a problem in the sense that if you watch the Blu-ray version of the series, none of the on-screen Japanese text gets translated. Subtitles are either “on” or “off” entirely, so if a little caption on the screen appears, it will go untranslated unless you put all the subtitles on. This is particularly weird, because if you have the DVD version of the series and listen to the English dub, that DOES have these little subtitles for on-screen Japanese text. If you can do it for the DVD you can do it for the Blu-ray, surely?

There is also some singing in the series. Most of this comes from the character Lillian Weinberg, an American space tourist who is one of the six ISS survivors. It is not to my personal taste, but it is only right to mention that the singing voice for Lillian in both the Japanese and English versions of the show comes from a British musical theatre actor, Laura Pitt-Pulford. 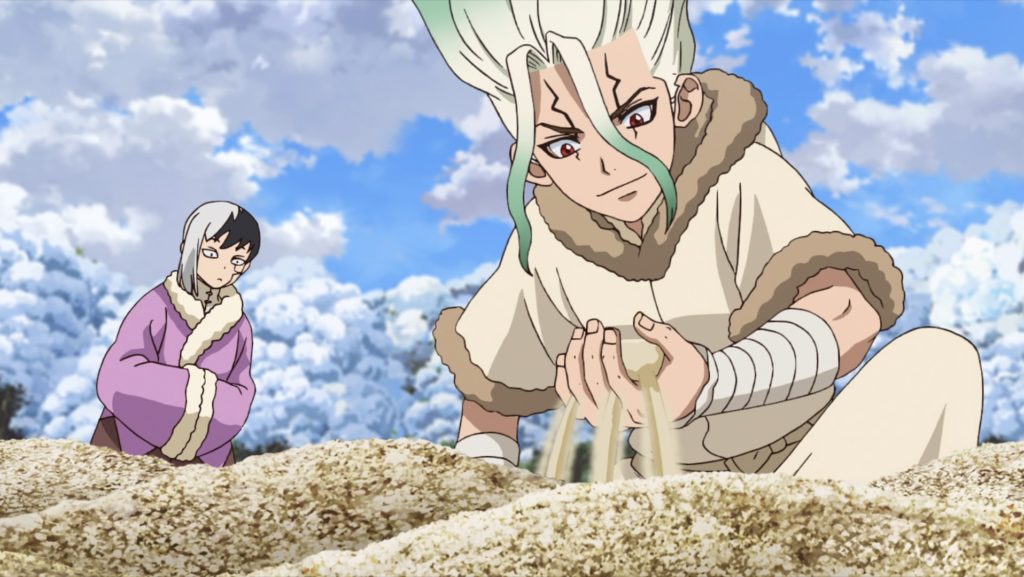 There are also some minor oddities that appear in the story too. For example, in the story in which artificial light is developed, the characters cover a tree in lights. Gen realises the reason for this is because it happens to be Christmas, and the scene ends with Santa and his reindeer flying across the sky. Now, I can understand Santa surviving, what with him being magical, but if it is the case that in this world Santa is real, then how come no-one in the village mentions him? Does Santa give these people presents too? We don’t see anyone giving presents at Christmas, so what gives? For that matter, how come Santa can’t magic people out of their stone shells? Are there limits to what he can do now?

On the discs, extras include a small feature entitled The Science Guys featuring the English cast, commentary for the final episode, and textless opening and closing. The two new tracks in this collection are “Sangenshoku” by Pelican Fanclub for the opening, and my personal favourite “Yume No Youna” by Saeki YouthK for the ending. There is also a limited edition version which comes even more extras. As well as a rigid box to store everything which has been designed to have a deliberately rough feel to it, there are also stickers, art cards, a 152-page art book which contains details of each episode and interviews with the Japanese cast and crew, and three rubber key chains designed to look like carvings of Senku, Taiju and Yuzuriha, as made by Yuzuriha in her days back in the school crafts club.

This has so far been a fun series, with the second part also bringing about more action. 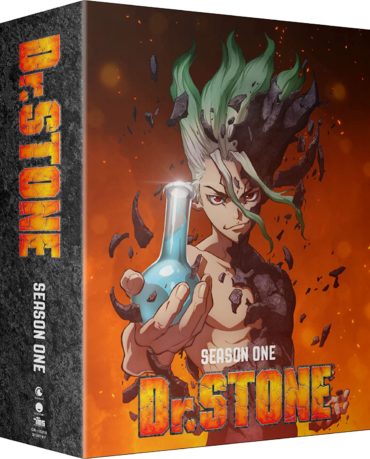