In Volume 4 of Unnamed Memory, we entered into a new timeline with characters we knew and loved, but whose lives had been subtly changed after the events of Volume 3. However, as much as things may have changed, the bond between King Oscar and Tinasha is the one ever-lasting element and their love brings them together, no matter what their circumstances dictate.

When we reunite with the cast in Volume 5, we find Tinasha rushing to break the curse on Oscar and preparing for her coronation as the leader of Tuldarr. Just as in the first timeline, Tinasha manages to break Oscar’s curse which is great news for all involved but means she no longer has a reason to stick around in the Kingdom of Farsas. Oscar is sad to see her go, but as two leaders of totally different (and powerful) countries, he acknowledges that politically he can’t pursue her romantically.

Then the coronation is held and Tinasha shocks everyone when she announces that she’s only going to take the throne for a short period, long enough to establish a working government to rule alongside the royal lineage. With this out of the way, it leaves her free to do whatever she wants, and Oscar wastes no time in asking for her hand in marriage, something she readily accepts.

Beyond Oscar’s proposal, this volume is largely spent moving along a subplot, one that once more threatens to overturn the whole world as we know it. It’s alluded to that certain characters are aware of the fact the timeline has changed and that this has caused cracks to appear in the world; some things have changed too much as whatever bond Oscar and Tinasha have has pulled them back together against all odds. Said characters want to take advantage of this and begin to put a plan in motion to get their hands on the small orbs sealed away in Tuldarr and Farsas’ treasure vaults. These are the same orbs that sent Oscar back in time at the end of Volume 3, thereby changing the future for Volume 4 onwards.

The other major event is that we finally meet the witch who cursed Oscar, something that never happened in the original timeline. This brings that particular element to a satisfying conclusion after we’ve waited so long, which makes me happy since I’d expected not to have this particular encounter until the end of the series.

On the whole, the rest of this book is more or less in line with the books that have come before. Some major storylines are running in the background while we check in here and there with Oscar and Tinasha as they deal with smaller events happening in or around their kingdoms as they get closer to their wedding. Some of these stories develop the two or feed into the overarching plot and some don’t, which is fine. You’ll know what to expect if you’ve been following the series for this long.

In the afterword, the author Kuji Furumiya says that this book is a “brief moment of tranquillity” and I suppose considering we get to see Oscar and Tinasha happy, that makes sense. But from a story perspective, it’s anything but tranquil as things begin to stack up before the conclusion. Some of the troubles our two main characters find themselves wrapped in throughout the book are also anything but peaceful, particularly when one involves children being kidnapped and killed! It does make me fear for what’s in store for our duo in the final instalment, but hopefully, we’ll get a happy ending even if our duo are put through the wringer to get there…

Unnamed Memory Volume 5 comes to the West thanks to Yen Press and continues to be translated by Sarah Tangney. The translation reads well with no issues to note. Volume 6 of the series is scheduled for a release on the 18th of October and Yen Press has also just released the first volume of the manga adaptation.

Overall, Volume 5 of Unnamed Memory sets up a powerful conclusion to the whole series. It continues to be interesting to see how things have changed compared to the initial timeline which helps keeps readers engaged if you’re here for the fantasy angle and not the relationship between Oscar and Tinasha. Either way, this is a series I still highly recommend! 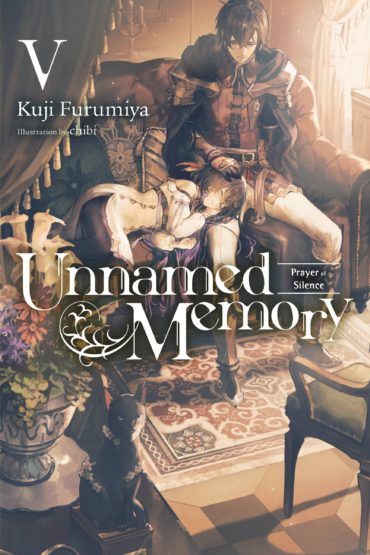