If you read my review for Volume 1 of Unnamed Memory last year then you’ll know I was quickly taken with this fantasy series. Now Volume 2 has been released and it’s time to find out if the series can continue being as captivating as its first entry!

As we reunite with Oscar and Tinasha, we find their days passing as peacefully as when we left them. However, with the appearance of the country of Cuscull (a country for mages) and aggression between them and neighbour Taiyiri building, it seems these quiet days won’t last much longer.

To make matters worse, it seems the king of Cuscull is someone from Tinasha’s past whom she’s been searching for. His name is Lanak and he was Tinasha’s love from long before she became a witch, but what drove them apart and why has he suddenly reappeared? And why does Tinasha leave Oscar behind to stand by Lanak’s side when he appears in the castle searching for her?

These are the questions that the first half of this book sets out to answer and it does so well. Although Volume 1 of Unnamed Memory was made up of relatively short episodic chapters, the first 100~ pages or so of this book are dedicated to this one arc. This is a notable change in direction compared to the previous instalment, but I think it works well for developing Tinasha’s character.

Up until now, we’ve known Tinasha to be aloof, distant and quite tsundere but without any real explanation for this beyond her having a troubled past. So, getting to see that story for ourselves is rewarding and certainly made me even more endeared to the character. It was also nice to have someone else come into the story who knows Tinasha, since so far there are very few characters who do (given the long lifespan witches have).

As far as new character Lanak is concerned, well, he’s a bit of a mixed bag. He thinks he has his heart in the right place by making Tinasha his queen and having her lead the country, but his desires often lean into moustache-twirlingly evil sometimes. I think the author manages to balance Lanak’s evil tendencies with his personality well enough to avoid any notable issues, but it’s still fair to say that he’s not as strong a character as Tinasha and Oscar are.

The downside of this being a Tinasha-focused tale early on means Oscar ends up somewhat sidelined. Even in the later stories in the book, Tinasha tries to discourage him from investigating cases, due to his standing as royalty. This makes sense since Oscar was shown to be a loose cannon in the first volume and more than willing to risk his life for little gain, but it’s still a bit of a jarring change all the same. Although he does still get himself into his fair share of trouble, so it’s not like he’s completely absent or anything.

One of the other interesting things happening in this book is that by the end, Tinasha and Oscar only have three months left on their year-long contract. Early on in this volume, Tinasha manages to break the curse on Oscar (very unceremoniously, considering how important it was in Volume 1, it has to be said) and therefore nullifies most of the reason for her staying by his side. In this year Oscar had been hoping to win the witch’s romantic affection and while the end of this book has nods in the right direction, it’s clear this hasn’t been accomplished yet. This means Volume 3 certainly has a lot to do to keep the two together much longer and I certainly hope it can live up to it.

I’m also eager to find out what the structure of the next book will be. Will it have one long story and then divert into short stories like this one or will it be one story start to end? I did find this volume a little disjointed in how it told its story, despite how well written it was, so I’m hoping author Kuji Furumiya can fix that.

Unnamed Memory Volume 2 comes to the West thanks to Yen Press and has been translated by Sarah Tangney. The translation reads well with no issues to note. The series is now complete in Japan at 6 volumes (although a sequel series was announced) and Yen has Volume 3 scheduled for an English release in July.

Overall, Unnamed Memory Volume 2 feels a little disjointed compared to Volume 1 and that takes some of the shine off it. However, the story it sets out to tell is one the readers will be eager to explore and one that more than makes up for any downsides. 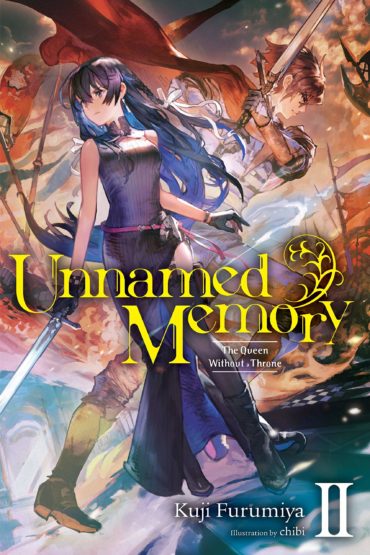 Title
Unnamed Memory Volume 2: The Queen Without a Throne

Unnamed Memory follows the story of a cursed prince seeking a way to overcome it with the help of a powerful witch. Together, they’ll have many an adventure, while slowly figuring out a way to overcome the problem he faces.