Crow-controlling mage Ashaf and woman/beast Guideau have been summoned to get rid of a malevolent witch wreaking havoc in Louisblanc – but their investigations reveal that the witch is not at all what she seemed to be. After a shocking denouement, they are ready to move on – although Guideau is as restless as ever, driven to hunt down the witch who cursed her before the curse finally works its malevolent magic.

But an unexpected encounter with an ‘undead’ leads Ashaf to call in two experts in the field of necromancy from the Order of Magical Resonance. The stunningly beautiful Phanora Kristoffel and her assistant Johan arrive and proceed to investigate the presence of ‘strays’, undead who have been illegally resurrected by a caster. Phanora deduces that these undead have been revived to be familiars, to carry out the wishes of the unknown practitioner. But exactly what those wishes might be…and who is manipulating the undead remains to be discovered. And with uncontrolled strays roaming the land, the mystery needs to solved swiftly before things get out of hand.

The second volume of The Witch and the Beast is a better read than the first, having settled into what seems to be its modus operandi, fictionally speaking: a series of horror-themed, supernatural mysteries to be solved that lead us deeper into the dark heart of the Order of Magical Resonance.

Quite what the relationship is between Guideau and Ashaf is still far from clear: they work as a team but Guideau constantly growls her hatred and contempt of the cool-headed, suave Ashaf, although at the same time, she seems remarkably dependant on him. They are absent from the main mystery in this volume, Beauty and Death, which is, at heart, a zombie tale but very elegantly told with gothic art that suits this twisted, nightmare fairy-tale well. It raises some suitably disturbing questions about the nature of love, death and unnatural resurrection. And in demonstrating the strong partnership between Phanora and her assistant Johannes, it poses an intriguing comparison with Guideau and Ashaf.

The final chapter takes us back to Guideau and Ashaf, with the threat of new opponents – the Paladin Corps – as the ill-assorted pair set off on a new mission: The Witch and the Demon Sword.

Kevin Gifford’s translation for Kodansha Comics flows well, unravelling the arcane passages and terminology convincingly alongside the more mundane bickering couple interchanges between Ashaf and Guideau. There are no colour pages this time – a shame as the twilit blue colour palette used on the striking cover image is so atmospheric. The character designs are also more consistent, and the overall graphic style delivers an unsettling blend of beautiful (in an Art Nouveau way) and unsettlingly gruesome, which matches the story material well.

The Witch and the Beast is not a comfortable read – but to say so is to compliment mangaka Kousuke Satake on the genuine chills that their story generates in the reader. This time there’s a real sense of the ‘otherness’ of the world through which Ashaf and Guideau move. Magic and necromancy are a powerful and compelling combination in the hands of the right storyteller and the questions raised: When does love turn to obsession? What does necromancy really involve? are explored in unexpected ways that will linger in the reader’s mind long after they’ve reached the end of the book. 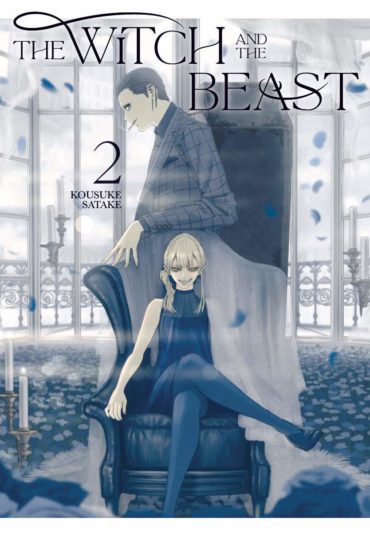 Title
The Witch and the Beast Volume 2

Cover designer
My Truong for Kodansha comics, based on the original cover design by Yusuke Kurachi (Astorb)

The Witch and the Beast Volume 5  Review

How did Ashaf the Mage and Guideau, the witch-cursed young woman first meet? The fifth volume of The Witch and the Beast has some intriguing answers…