The Witch and the Demon Sword

Mage Ashaf and witch-cursed girl/beast Guideau arrive in the city of Pontevert in Valencine to find an evacuation in progress, instigated by the formidable Paladin Corps. A witch is at large – and the Paladin Corps are determined to take her down. The young witch, Helga Velvette, is also the reason for Ashaf and Guideau’s visit – but, of course, they’re not letting the Paladin Corps know that! And why is Helga a target? She has in her possession Ashgan, the demon sword which – if unsheathed – will destroy the world.

Confronting Helga, Ashaf and Guideau discover that not is all as it seems. The Velvette family of witches are designated protectors of the demon sword (which turns out to be quite chatty, even when sheathed). Guideau, who hates all witches, finds herself forced to protect Helga from the Paladin Corps. And when the dreaded Executioners turn up, it looks as if not just Helga but Guideau and Ashaf are in mortal danger.

This latest instalment in the increasingly intriguing dark fantasy by Kousuke Satake from Kodansha Comics concludes on a cliffhanger and is action-packed, filled with magical battles. But the most compelling reason for reading it is the character development given to Guideau as the foul-mouthed girl/beast is compelled by the contract she and Ashaf have taken on to actually protect a witch – and, as you’ll know if you’ve read even a few chapters of this manga, Guideau hates witches with all her being. (We still don’t know the full story as to when and why.) And as she and Helga fight side by side to protect the sword, we see Guideau’s implacable attitude soften just a little…

This volume introduces some interesting new characters. The ‘Man of Ice’, Colonel Matt Kugat, the Paladin in charge of the forces hunting down Helge reveals himself to be a truly formidable opponent, with terrifying elemental powers. However, his Paladin Corps may be concealing a traitor. And then there’s Ashgan, the annoyingly talkative demon sword that’s dangerous, even when sheathed. It turns out to be more than capable of wreaking havoc among those nearby who are driven mad by their desire to possess it. Most intriguing of all is young Helge, who although described as ‘weak in battle’ by her pursuers, is the most sympathetic of all the witches Guideau has encountered so far. Is someone trying to frame her? She’s very loyal to her family duty – and yet her trip to Pontevert (she was only hoping to find a boyfriend) has gone so horrendously wrong that it’s impossible not to feel sorry for her and to root for her to somehow escape the forces bearing down on her.

Volume 3 has another wonderfully atmospheric cover from mangaka Kousuke Satake, imbued with rich, dark colours depicting a dark wood-panelled interior. This arc is filled with magical battles, flight and pursuit, as well as scenes of destruction on the grand scale and the mangaka’s skills in depicting these action scenes has definitely improved since the first chapters. There are still some panels in which it’s difficult to determine exactly what’s happening due to the impressionistic style adopted by the mangaka and the predominant use of white and grey, rather than black for many of the action scenes. If I was being picky, I’d say I’d like to see more character-based scenes and less explosions. But overall, this third volume makes for another entertaining read – and when the escalation of extraordinary events causes even the cool and calm Ashaf to look dismayed, you know that the witch-seeking pair are in the deepest of trouble. Another bonus is the fact that a few more facts about the origins of the witches are slipped in so that we learn a little more about Guideau’s mysterious adversary.

Kudos to Kevin Gifford for translating all the magical terms and titles so convincingly – and to letterer Phil Christie for dealing with the extraordinary battery of SFX thrown up by the battles (as well as depicting the demon sword’s seductively powerful voice).

A charming extra is a 3-page bonus manga at the end: P.S. At Phanora’s Mansion which brings back necromancer Phanora and Johannes from Volume 2.

And now I can’t wait to see what happens to Helga and Guideau in Volume 4. Will Helga change Guideau’s deeply entrenched hatred of witches? This third volume is proof that Kousuke Satake’s dark fantasy is going from strength to strength, delivering a supernatural tale that is quite different from the others. 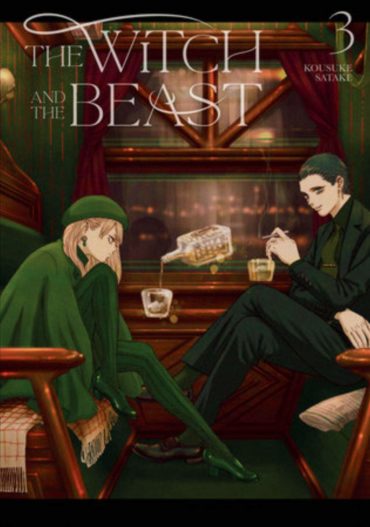 Title
The Witch and the Beast Volume 3