The Witch and the Demon Sword

Guideau and Ashaf have been caught up in a life-or-death battle for possession of Ashgan, the all-powerful Demon Sword. In helping the young witch Helga, whose clan members have been Ashgan’s protectors, Guideau has put aside her hatred of all witchkind – but now finds herself holding the sentient weapon as the sinister Executioner bears down on her. Colonel Matt Cugat, badly injured and doing his best to protect his Paladin Corps, senses that the newcomer has a Forbidden Instrument at his disposal. It’s Ishlingen, the Demon Hand, the Executioner reveals, “…created by the wise leader of an ancient lost nation…sewn from the skin of seventeen past kings. To enhance it, a royal ring was placed on the right index finger – the symbol of authority.”

The Executioner has other tricks and doesn’t hesitate to use them. It becomes all too clear to Matt Cugat and Ashaf that he plans to draw and activate the Demon Sword, unleashing Ashgan, the destructive spirit sealed within by Helga’s clan. How can they stop him – and seal the spirit within the sword once more – before it’s too late?

Godzilla versus King Kong? Forget it – Kousuke Satake brings us the Demon Sword versus the Beast! Their apocalyptic battle that takes up most of Chapter 20, rages on into Chapter 21. Before this kicks off, however, we’re shown in flashback why Helga was on the run with the sword and the betrayals that have placed her and Matt Cugat in their current life-or-death predicament. And the mangaka makes Helga all the more sympathetic by reminding us that her dearest wish is to be kissed before she dies. Ashaf tells her that her wish can come true – and it does, but not in any way she could possibly have imagined.

We haven’t seen a battle like this since Volume 1 – and this surpasses it, enhanced by extra intervention from elemental Matt Cugat (who is no match for either combatant). I have mixed feelings about how successfully Satake’s art allows us to follow the course of the battle. Some pages are extremely dynamic and effective – utilizing different-sized panels, close-ups and aerial shots, complete with sound effects (praise to letterer Phil Christie!). But in others, I had no idea what was going on at all.

Satake has kept hidden from us how Guideau transforms into the Beast; does she merge with whatever is contained in the coffin that Ashaf carries on his back and what magic rite precipitates the transformation? There are more hints here but it’s still kept (deliberately?) vague. Although it looks as if – from developments in the final chapter in this volume: ‘When “Stay” No Longer Works” – that we will find out more in Volume 5!

This fantasy is still very much on the dark side of grimdark and the magic system in the world that Guideau and Ashaf move through is intriguingly ghoulish; no mean achievement for the mangaka in a field which often falls back on well-trodden paths and over-familiar tropes. Satake has built a convincing world for his characters to move through which helps the fantasy feel more ‘real’. Nevertheless, with Ashaf and Guideau still remaining cyphers for the most part, it’s difficult to get involved with them and their dilemma, which is a pity. Helga (and her ‘unusual’ relationship with Ashgan) is a much more sympathetic character, but whether her part in the ongoing story is now concluded – or not – remains to be seen.

Kevin Gifford continues to deliver a very readable translation, which helps the reader navigate the twists and turns of the story. And there’s another striking cover, radiant with sun-drenched yellow, this time – just a shame there are no colour pages inside the volume.

This volume ends on a significant cliff-hanger, so hopefully we won’t have to wait too long for the fifth volume to see where this will lead! 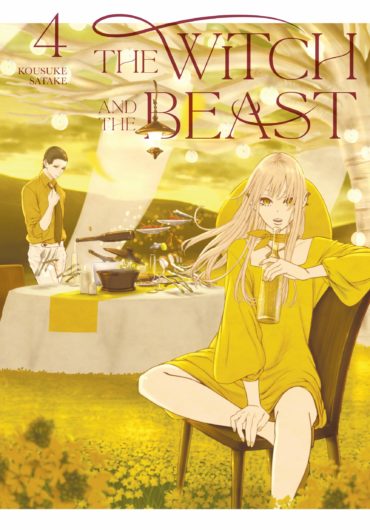 Title
The Witch and the Beast Volume 4