Ashaf the mage has taken Guideau on a perilous journey below the earth to the land of the vampires: Orlencia Sett. This involves wearing black clothing (nineteenth century style, of course) as, according to Ashaf, the contacts they’re about to meet will expect them to do so – after all, it’s the shade favoured by vampires. But the coach they’re travelling in is attacked by a powerful and dangerous vampire, Dunward, who instantly targets Guideau. It seems that he – and the mage Oscar who, in spite of their name, outwardly presents themselves as female – are Ashaf’s contacts (and envoys from the Order) in Orlencia Sett. Almost immediately, all four are ambushed by vampire-hunters and after a vicious battle, Oscar tells them, “If you’re looking for leads on a witch, our goals may be in alignment. The vampire we seek…is the queen.”

A plan is set up; Oscar and Dunward will take Ashaf and Guideau to a gala event held by the Conglade, one of the most powerful vampire factions. It’s ostensibly an elegant masked soirée – yet is merely a front for selecting delicious prey. But unreliable Dunward reveals his true agenda and identity in front of the assembled vampires and too late, Ashaf, realizes that they have been unwittingly involved in a plot…

One of my initial problems with The Witch and the Beast was the style employed by the mangaka when drawing action scenes – and this is a series filled with both magical duels and large-scale battles. Unfortunately, the magical encounters in these chapters, are often confusingly portrayed (a step backward, sadly) and there are many panels depicting these which are filled with so much roiling darkness and action lines that it’s hard to tell who’s fighting whom. Which means that their impact is muted and the reader begins to lose interest (well, this reader).

Another problem which is really noticeable in this volume is the lack of development given to the main characters. It scores points on gothic atmosphere but spends far too much time on the rather convoluted set-up within the vampire society which, intriguing as it is, seems unnecessarily convoluted. Six volumes in and we still know practically nothing about Ashaf (he’s a mage and he uses ravens – or an illusion of ravens, his trademark magic). We also know that he and Guideau are in pursuit of the witch Angela who has cursed Guideau but that vital quest is hardly alluded to in these chapters. There might be a hint in the final pages…but it’s left to the reader to try to fathom out if the encounter portrayed there is relevant in any way to the main story. We have to guess that it is – but it’s all rather vague which undermines its effectiveness as foreshadowing.

It’s disappointing, as well, as the intimate conversation at the end of Volume 5 had Ashaf telling Guideau straight out that he was going to ‘teach her a very important lesson’ and there’s very little sign of that taking place. Impossible to rid oneself of the impression that a lot of wheel-spinning is going on here though it’s not easy to work out why. At the very moment when the mangaka needs to go deeper into the characters and their motivations and advance the plot, they seem to get distracted by the intricacies of the vampire society they’ve created.

The translation is yet again ably delivered by Kevin Gifford with lettering by Phil Christie for Kodansha Manga.

Doubly frustrating is the fact that a good quarter of this volume is taken up with Chapter 0: Witch and Whim a one-shot (and, it seems, Satake’s first published manga) which is set in a medieval-ish fantasy world and introduces the theme of the pretty but playfully wilful witch that the mangaka goes on to develop in The Witch and the Beast. The bonus is P.S. “Beyond Death” a rather dour little story about Necromancer Phanora Kristoffel (Volume 2)  granting the wish of a bereaved daughter in the ‘Be Careful What You Wish For’ tradition. 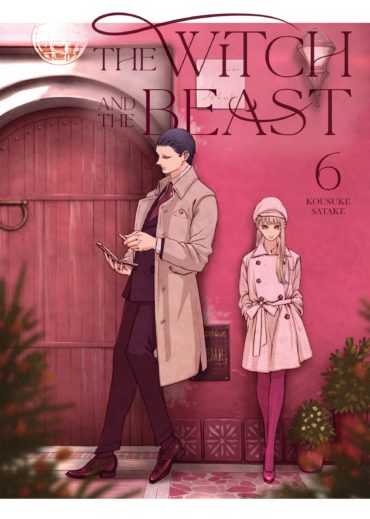 Title
The Witch and the Beast Volume 6