When it comes to thought-provoking, shorter manga series we can always count on publisher Vertical Comics to deliver. These titles range from Sickness Unto Death and The Gods Lie, right up to their latest release Haru’s Curse, which I’m taking a look at today.

The story follows Natsumi, whose younger sister Haru died at the age of nineteen, leaving behind her family and fiancé, Togo. After Haru’s funeral, Togo asks Natsumi to date him and Haru agrees – on the condition that he takes her to the places he and Haru went on dates.

Throughout their lives, Natsumi had eyes for no one but Haru. She has no attachment to their father, nor their mother who left them behind after leaving their father. She and Haru even agree to move out and live together as soon as they’re old enough, at least until Togo comes along.

Once Togo comes into the picture, Natsumi becomes resentful of his presence because she feels that he’s stealing her sister away. But now that Haru is gone and she begins spending time with Togo, she begins to understand why Haru liked him and how she, too, is beginning to feel attached.

This is a story of grief, love, guilt and those left behind. Natsumi feels immeasurable guilt for dating Haru’s fiancé and far worse once she develops feelings for him. Togo, too, feels the weight of his time with Haru bearing down on him but he also acknowledges that he needs to move on with his life. Both are trapped within Haru’s shadow, unable to move on even if they know they need to, because they’re scared of what she might have thought.

The interesting thing about Togo is that he feels trapped. His whole life has been planned out by his parents and his bloodline. Even his engagement to Haru is something he has no say in, it’s something he’s required to do. Only once he starts dating the free-spirited Natsumi (a choice he makes), does he realise that he could escape all this if he wanted to.

Haru’s Curse was originally released in Japan as two separate volumes, but for our English release Vertical have combined it into one omnibus instalment. This was a good decision since the series certainly benefits from being read in one long sitting.

The chapters are delivered from three different character perspectives. We largely see the world through the eyes of Natsumi, but there are also sections  from Togo, and Haru before she passes away. Haru’s stories are particularly heart-wrenching as it’s clear she believes Togo would be a better match for Natsumi, no matter how much she loves him herself. She feels too immature and her way of thinking is too different from her older sister.

Author Asuka Konishi has crafted a very gripping story here. From start to finish I was engrossed in the storyline and looking forward to seeing where Konishi was taking the characters, especially when there are so many different directions it could have gone.

My only criticism is that I wish this had been three volumes instead of two since it felt like we were constantly embroiled in drama with no breathing room to just relax and spend time with the characters. I know that wasn’t the point of the story and we do get a little bit of this in Volume 1, but I liked the cast enough where it would have been nice to see.

Considering this is Konishi’s first series (they have another currently being published in Japan), it’s very exciting to see what a high-quality work this is. Not only is the story fantastic but the artwork is also very detailed. Konishi is good at conveying emotion through her characters, despite the fact most pages are made up of fairly small panels. Because of this, backgrounds tend to be quite sparse, but for a series like this which is so fixated on the feelings of the cast, that’s okay.

As far as manga is concerned. Konishi also has quite a unique art style. The characters have thick outlines throughout the series and this, combined with their overall proportions, gives off the impression of a manga-style webcomic. I wouldn’t be surprised if the style might put some readers off, especially as it takes a little bit of getting used to, but I did grow to appreciate it by the end of the book.

As previously mentioned Haru’s Curse comes to the West thanks to Vertical and has been translated by Hannah Airriess. The translation reads well with no issues to note. This release comes complete with several colour pages, which is a real treat, since Konishi’s style suits colour extremely well.

Overall, Haru’s Curse is a manga with a great deal of depth which will draw readers in and refuses to let go until the end. Although I don’t think the art style will be for everyone, I think the strength of the story overcomes this. This is a release that deserves to be given a chance by every romance/drama fan.

Read a free extract from Haru’s Curse at the publisher’s website here. 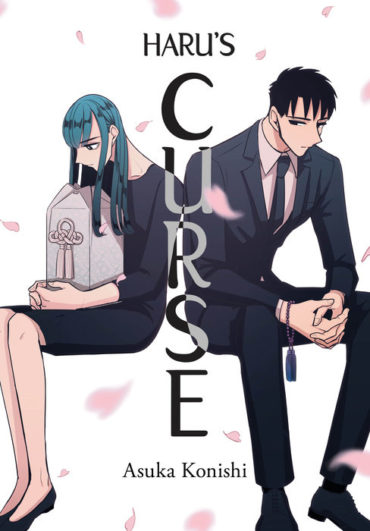