When Owarimonogatari Part 3 was released last year, it brought the Monogatari series to a fitting conclusion. However, author NISIOISIN is far from finished with this universe and declared that Owarimonogatari was to continue for one more instalment.

The story picks the day after Koyomi Araragi graduates from high school. Now that he’s no longer in school, his little sisters don’t come to wake him up and Araragi is left to his own devices, which leads him to contemplate his future while washing his face in the bathroom.

Suddenly our hero finds himself pulled into the bathroom mirror and ends up in a ‘mirror world’. While some things are the same as ever, others have changed, such as his sister Karen now being shorter than he is!

Araragi needs to find a way back to his world and without Shinobu to turn to (she’s been separated from him when he came to the mirror world) he heads to Kitashirahebi Shirine to discuss the matter with newly appointed god, Mayoi Hachikuji. The young god leads Araragi to try going to Kanbaru’s home, whose bath may be a portal back home but when Araragi gets there, he realises Kanbaru is not the friendly junior he remembers; upon arrival, Araragi is greeted by Kanbaru threatening to kill him! Then he’s rescued by Black Hanekawa, who equally hates him but is acting on someone else’s orders. With no Shinobu or girlfriend Senjougahara to help him, our hero returns to Hachikuji in hopes of getting some more advice or he may just find himself trapped in this world for good…

In the afterword for this book, author NISIOISIN confesses that with Zoku Owarimonogatari he wanted to return to what the essence of a novel is to him: a single book that doesn’t need to worry about foreshadowing, that can be read or not read at the whim of the reader – and I think that he was successful. This story is self-contained and nothing that happens in it even remotely affects the Monogatari universe at large. Being in a mirror world allows NISIOISIN to simply play with his characters, to change and shape them however he feels. You can feel his enthusiasm seeping out of the pages, which is always nice.

However, I think there is certainly an argument to be made for whether you should read Zoku Owarimonogatari or not. As a reader, I found I wasn’t as gripped by this entry in the series as I normally am. I suppose I’m simply not a fan of alternative universe ideas and although I love the cast, I didn’t see as much of the characters I like as I’d been hoping to.

If you’re looking to experience everything that Monogatari has to offer then this won’t disappoint, but I do think some readers will put off by how silly the premise is. These are both the characters we know and yet different. They’re our heroes but not and that small disconnect left me feeling a little cold toward the whole thing, as it will others.

Zoku Owarimonogatari comes to the West thanks to Vertical and has been translated by Ko Ransom. The translations read well, although early on in the book when Araragi first enters into the mirror world there is quite a lot of mirrored text when he was talking to other characters. I found this hard to decipher and was much happier once Araragi decides to break the fourth wall and declare he’ll abuse his narrator position to simply translate for us.

Next up in the series should be Orokamonogatari, but currently, there aren’t any listings for it from Vertical so perhaps the company is going to take an extended break from the franchise. This makes sense,  given we’ve both reached a solid stopping point and the company is currently working through Pretty Boy Detective Club, another of NISIOISIN’s series.

Overall, Zoku Owarimonogatari is another entertaining entry in the series that is neatly self-contained. Not everyone will get on with the concept but that’s fine because this isn’t an instalment you have to read to know what’s happening next time. It’s simply an extra edition in this huge franchise. 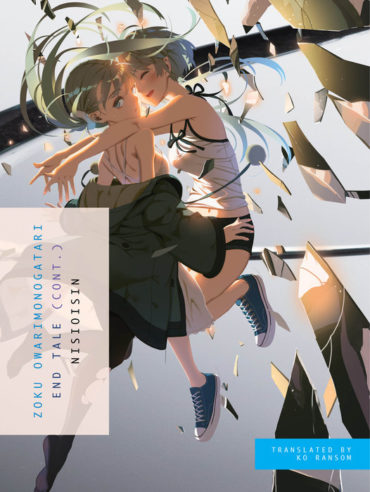 Nekomonogatari (Black) rekindled my love for the Monogatari franchise and highlights just how big an impact translation can have on light novels. This latest entry in a much loved series comes highly recommended from me.