In isekai stories, the main character is often knocked down by a truck. Yatora Yaguchi’s mundane high school life is changed forever – not by a truck but by the shattering impact of a senpai’s painting. Now he’s obsessed with making his own art and is planning to go to TUA University. He’s even been attending an evening class in secret, paid for out of his own savings. There’s only one problem: he needs his parents’ consent to apply. His father is just pleased that his son has found something he wants to do but his mother is upset and doesn’t see any point in studying art. It’s not until Yatora draws an informal portrait of her doing the housework and has a long and heartfelt conversation with her as to why he feels compelled to become an artist that she relents.

But Yatora has begun to realize how little knows about art and artists. Now in his final year at high school, he signs up for an evening course in oil painting at prep school which will prepare him and the other students for the tough entrance exam to TUA. Their vivacious teacher, Ooba-sensei, may be all smiles, but she’s very perceptive and doesn’t sugar-coat her words with her students. “TUA’s gonna be tough with the way you are now!” she cheerfully tells the crestfallen Yatora and proceeds to break down the numbers applying for the course and the examinations he’ll have to pass. She then analyses some of the oil paintings that past students have created to enter TUA, before advising, “It’s more important to create your art – art that is uniquely yours.” Yatora is told to go out and discover what appeals to him and realizes that he has been so busy making his own art that he’s neglected to go to galleries and actually look at other artists’ work. It’s going to be a steep learning curve!

Yatora finds himself alongside other students as fiercely motivated as he is, although not all of them are friendly. Yotasuke Takahashi, the precocious young genius that Yatora has already met, is as prickly as before but outgoing, self-confident Haruka Hashida is a breath of fresh air, breezily sweeping Yatora along in his enthusiastic approach to his work. But things are not going so well for Yatora’s classmate Ryuji (on the front cover art, this volume) who dresses as a girl, Yuka. Yatora’s a sympathetic guy and he’s there for Ryuji/Yuka when life deals them a harsh blow. Nevertheless, bombarded with conflicting advice, Yatora finds himself torn in too many directions. How is he going to produce an oil painting that’s good enough to get him into TUA?

If you’ve ever been a student of the creative arts, this second volume of Blue Period – and Yatora’s predicament – will really resonate with you; it certainly did with me. He’s lucky in that Ooba-sensei has her students’ best interests at heart, although not all of them understand that, especially Yotasuke. She has some harsh things to say to them about the realities of studying art. But Yatora really cares about art; he’s found the one thing in life that’s meaningful to him and the purposely hurtful things said by Yotasuke strike home, even if they’re coming out of the mouth of someone who’s also hurting and lashing out.

However, in a story about becoming an artist, the black-and-white manga art is still inadequate in the (admittedly insightful) analyses of art techniques, especially the pages where the students are studying a replica of Gustave Klimt’s A Field of Poppies by Matsuba Yachigusa. All the talk of the use of colour/composition is lost on us in greyscale. (Bring on the anime TV series soon, please!) Mangaka Tsubasa Yamaguchi’s impressive use of colour is showcased in four gorgeous colour pages in the centre of the volume – and if the creative team pick up on this, the anime is going to be a visual treat. But until then, we have to imagine the paintings described here (and listed, with their artists at the end of the volume).

When it comes to the manga art itself, Tsubasa Yamaguchi has a striking style and is especially good at showing us that what the characters are thinking and feeling doesn’t always correspond with what they’re saying. When Yatora’s trying to convince his mother that art school graduates can get good jobs, like other graduates, his eyes and forced smile betray him.

Translation for this volume in Kodansha’s ongoing edition is again by Ajani Oloye and moves convincingly from the everyday inconsequential chatter of the students to the formal critical analyses delivered by Ooba-sensei. This volume is rounded off by a short bonus in which Yatora remembers his first impressions of Ryuji/Yuka and four light-hearted yonkoma strips.

In the second volume of Blue Period Tsubasa Yamaguchi delves deeper into the mindset of Yatora as he struggles to find his voice and style as an artist. There are some painful realisations for the young would-be artist to face up to, as well as for two of his fellow students: Ryuji/Yuka and Yotasuke. Recommended. 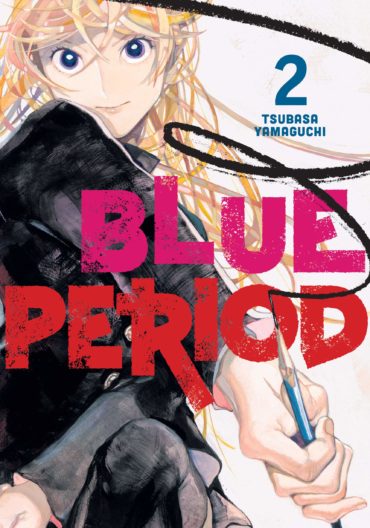