“Why don’t we all go out for a little breather?!”

Ooba-sensei’s students are badly in need of a distraction from the ongoing university entrance examinations, so she takes them out on a field trip to the Bone Museum. Yatora and the others in the group spend the morning just looking at the exhibits. But after lunch, Ooba-sensei tells them to go round the exhibition again, this time with their sketchbooks. “For our first go-around we viewed these exhibits as visitors,” she tells them. “This time we’ll view them as artists.”

Cut to Ooba-sensei waiting at the art institute to welcome back the three students who have passed the first exam. If you haven’t caught up with the anime, then you might want to stop reading at this point… but there’s no way to continue discussing the manga without naming those three: Hashida, Kuwana and Yatora. No time to waste, says Ooba-sensei, relentlessly cheerful and energetic as always. The next examination will be oil painting and Yatora is worried about his understanding of colour. Cue some discussion about the colour wheel – which prompts Yatora to go to the art shop to buy more supplies. Who should he meet there but Yuka who addresses him in a much more feminized way: not just clothes and makeup but mode of speech as well, something referred to in the translation notes at the back but truly difficult to render effectively in English which doesn’t have such distinctly different masculine and feminine modes of speech as Japanese. (And this is quite a challenge for the translator!) Yatora doesn’t yet know that Yuka walked out of the first examination, having drawn a large X on their canvas. But he finds out that Yuka’s quit art school and is working part-time as a hostess in a bar. Yuka’s parents are evidently unable or unwilling to handle the situation; only their grandmother, the one to foster Yuka’s talents as an artist, is still sympathetic – but she’s the one that’s also encouraged Yuka to study Nihonga (Japanese Art) which is not, it seems, where Yuka’s real interests lie.

Matters come to a head when Yuka – for reasons which I won’t spoil here – runs away from home and contacts Yatora. The two end up at the seaside and spend the night in a small hotel. “Have you ever drawn yourself in the nude?” Yuka asks bluntly and no, Yatora hasn’t. The two young artists divide their hotel room with a screen and, on either side, with mirror and sketchbook, strip off and start drawing. And as they work, Yuka begins to talk frankly about their feelings – for the first time – to Yatora and Yatora shares his insecurities about the upcoming exams. By the time they’re on their way back to face the challenges that await them, there’s a new understanding between them that’s flowered from this shared experience. But is it enough to get them through the difficulties of the next few days? 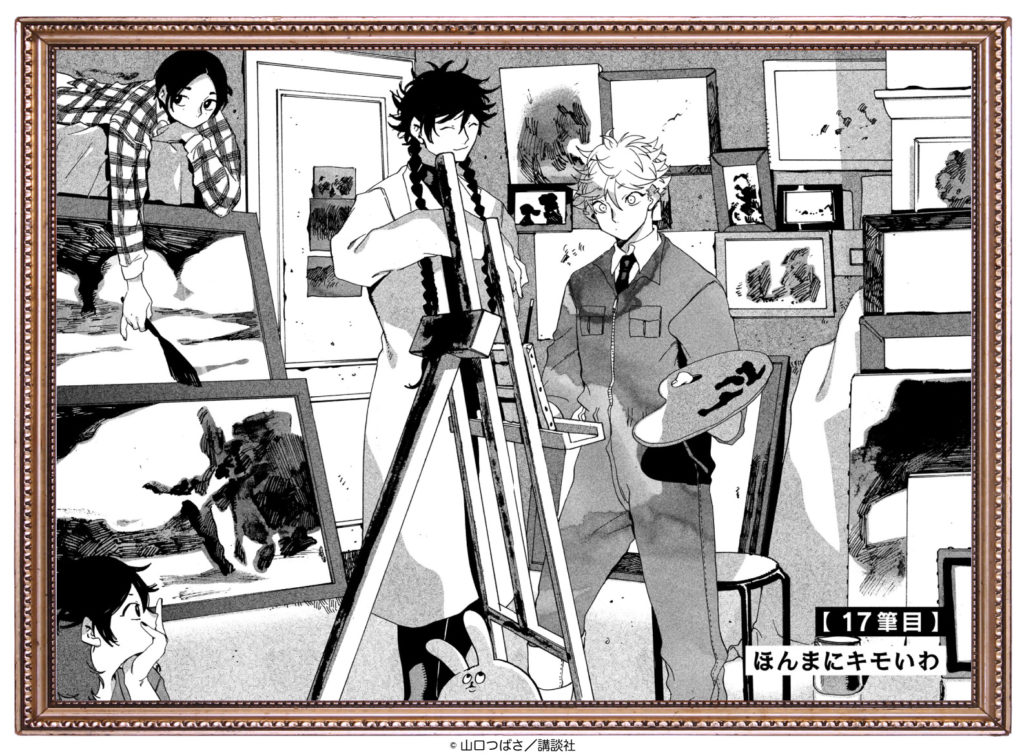 The anime (even though Netflix is releasing it two-three weeks behind Japan) will probably have overtaken the Kodansha manga US publications by the time you’re reading this review. Good as the anime is (and it is good) I’m glad that I’ve had the opportunity to read and assess this volume for myself before seeing it in anime form as there’s so much more in the manga! There’s also the fact that the manga takes some time to explain more technical stuff about using colour as Ooba-sensei talks Yatora through his concerns. However, the info dump is much better integrated into the way the story’s being told in the manga here than in the earlier volumes. But it’s still so much easier to show the difference between different tubes of red paint in colour animation!

Nevertheless, chapter by chapter, Blue Period has slowly and impressively gained in depth and character development – and the chapters here that show Yatora and Yuka on their spur-of-the-moment escape to the seaside in winter are by far the best that Yamaguchi has given us so far. The Yuka we see here is riven with conflicted feelings, radiating a palpable aura of despair and fury. Yuka’s eyes – and I think we’re being shown them as Yatora sees them – are like a mad creature’s. Yuka has known Yatora since middle school and isn’t afraid to lash out at him, accusing him of always playing it safe in life. The encounter on the station platform as a train is coming in is terrifying because we don’t know what Yuka truly intends. (There’s a trigger warning at the front of the book about mentions of suicide alongside helpful addresses and phone numbers for US readers.) This is the first truly meaningful and honest exchange of thoughts and feelings in the series between the two so far and even though we’re mostly seeing Yuka from Yatora’s point of view (Have I been projecting my own feelings onto him?) these chapters are truly gripping. Yuka also notices the angry red weals of urticaria (hives) on Yatora’s arms – and as they part, buys him a tube of anti-itch cream (Hives B-Gone), a spontaneous and touching gesture. Yuka may have lashed out at Yatora yet deep-down, they maybe see him as an ally.

But then, the final chapter of this volume brings Yatora, Kuwana and Hashida to examination day. The ominous chapter title is ‘An Unexpected Enemy Attacks’ and it leaves readers on a nail-biting cliffhanger!

The fifth volume of Blue Period is as handsome as the others in Kodansha’s edition with another compelling character portrait (Kuwana this time) and shinily embossed brush strokes on the front and the Western-style comic-style colour panels on the rear, each one encapsulating a plot element explored inside. The colour page this time is Chapter 20 ‘Our Blue’ and comes halfway through the volume, not at the front. Yamaguchi’s art goes from strength to strength with some whole page and double-page spreads that – although in greyscale – are atmospheric and effective. Ajani Oloye’s translation continues to flow well and their translation notes at the end are helpful and interesting, as before. The mangaka again credits the artists who contributed their works which represent the paintings of the students.

There are two bonus stories this time and both are well worth reading: the first is about Kuwana and that gifted older sister of hers and the second, ‘Art School Entrance Exam Meals’, is a fun look at Ooba-sensei’s three remaining students and their lunch plans. Four yon-koma strips are placed halfway through the volume, not at the end, this time.

We’re still way behind the Japanese releases and Volume 6 isn’t due out from Kodansha until February 2022 (which, if things continue as they are, means the digital version will probably be out first with the physical version appearing at a later date).

Looking back at Yatora in Volume 1, it’s fascinating to see now how he’s changed. Yamaguchi portrays a very different young man at the beginning: his expression is self-confident but detached, he’s rocking the bleached hair and pierced ears delinquent look. Making his own art strips away all those outer defences he’s erected to protect himself; the Yatora in these chapters is vulnerable, filled with self-doubt yet able to talk honestly with Yuka for the first time. No wonder he says as he sits down to paint, “My brush feels light today.” 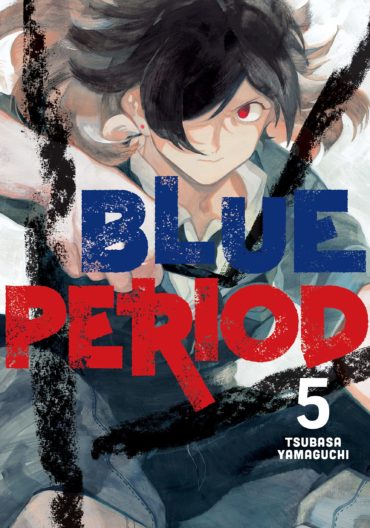