I didn’t know studying wouldn’t be enough. I had no idea… it’d take this much strength and energy.

It’s the first day of the three-day second examination for the Oil Painting Course at Tokyo University of the Arts (TUA). The elevators are out of action in the examination building and Yatora has to get all his heavy painting gear up eight flights of stairs to the examination room. He’s already at his limit, with a pounding headache (migraine?), eyestrain and the burning skin rash that might or might not be hives, and collapses on his way up the endless stairs. But he can’t afford to miss the first day, even if he’s in no fit state to do any serious painting. With Maki Kuwana’s help, he manages to set himself up alongside the other examinees and discovers, as Ooba-sensei predicted, that the second examination is to ‘Create a painting in any way that you like that combines the model and the examination room.’ In other words, a nude picture (there’s a live model) – the very topic that Yatora had been exploring with Ryuji before the examinations began.

With only his willpower keeping him going – just about – he’s unable to report back in person to Ooba-sensei with the other two, going straight home to collapse into bed. But she contacts him that evening by phone. Upbeat as ever, she helps restore his morale and together they plot a way for him to get through the rest of the examination using strategy: an advantage! Out go the contacts, in come the glasses, a cooling patch on his forehead is concealed by his hair and a beret – and painkillers. It’s the theme of his painting that’s troubling him the most, though, but after Ooba-sensei boosts his self-confidence in her habitual brisk way, he feels ready to fight again the following day. He’s had a terrible start but there are two days left in which to prove himself. Will it be enough…?

With this volume, mangaka Tsubasa Yamaguchi tells us in her afterword, the first story arc comes to an end. If you watched the last episodes of the anime TV series of Blue Period, you’ll already know the outcome of the second exam. The anime deals with the stress of the exam very effectively – but reading the original manga, Yatora’s experience seems even more raw and distressing. His half-closed eyes and his sweat-drenched face, his slumped posture, everything about the way Yamaguchi draws him conveys his desperation and the intensity of his suffering. As you read these chapters, you feel as if you’re living through the experience with him, panel after agonized panel. There are some nice little domestic details at the Yaguchi home, with Yatora’s mother fiercely determined to encourage her son now as much as she can and his father, seemingly blasé yet supportive. At the examination building, there are more awkward yet revealing exchanges with the prickly prodigy/genius Yotasuke who has no people skills. Yatora, who is fascinated by him as well as in awe of his natural talent, always seems to find himself sitting next to him in the lunchbreak or running into him at the station. But most revealing of all (in chapters that are themed around the subject of ‘the nude’ in art and nakedness) are, after much soul-searching, the conclusions that Yatora comes to about himself – which he explores and reveals in his final examination submission.

No wonder that we see Yatora lying on his bed back at home when it’s all over and done, reflecting, “I feel adrift.” After using up so much adrenaline and creative energy, the slump he experiences afterwards is something many of us will remember vividly when examinations come to an end. Even though he goes back to high school and meets up with his friends, looming over everything is the fact that the results for TUA will be posted at the same time as his graduation ceremony. And, frustratingly, he keeps missing Mori-senpai (the artist portrayed on this volume’s striking cover).

No lovely colour inserts, this time, sadly – although the manga has several impressive double-page and single-page spreads showing us Yatora’s thought processes and sketches for his second examination piece. There are also helpful pages sprinkled throughout showing how to prepare a canvas for oil painting and how to stretch paper for water colour painting, not to mention several familiar images with historical information about earlier nudes by painters as varied as Michelangelo, Botticelli and Bouchard.

The translation for Kodansha is again by Ajani Oloye and deals expertly as before with the variety of art-related technical terms, as well as the everyday conversations and Yatora’s self-searching internal monologues. Lys Blakeslee does a splendid job in lettering the pages from Yatora’s sketches and notes for the examination. Two pages of helpful translation notes are included and there are four little 4-koma as well as a cute Original Bonus Manga in which Saeki-sensei gathers her graduating students for refreshments in the art room (after cleaning up, of course!)

And so the Exam Arc comes to an end and it’s been quite a journey for Yatora and for the reader too. Yamaguchi’s unique graphic style has brought her characters to vibrant life and I, for one, can’t wait to follow them into the University Arc that starts in Volume 7 (due at the end of May). 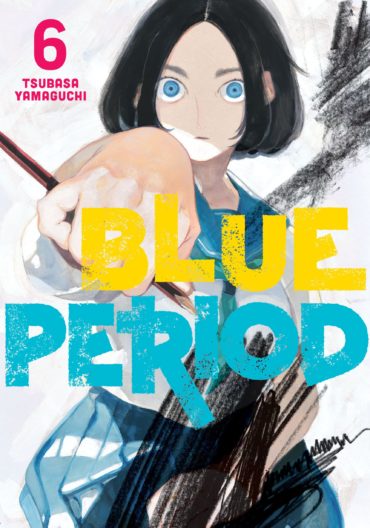 Art student Yatora is about to start the second term of his course at TUA – but he seems to be suffering from some crippling kind of block. Is this the end of his dreams to become an artist?

The end of first-year art show looms large for Yatora and his fellow students – and he’s struggling to decide what to paint. Has he fallen out of love with making art?