Usually, when it comes to yuri manga your first thought would be publisher Seven Seas, which specialises in the LGBT+ demographic of manga. However, today I’m here to review a new girls’ love series from Kodansha Comics: Chasing After Aoi Koshiba. Does it deliver an interesting read? Let’s find out!

The story begins with protagonist Sahoko on her way to a high school reunion. There she’s hoping to be reunited with Aoi, a classmate and her first love. After a brief period spent in the present, the story flashes back to Sahoko’s second year of high school and to when she first got to know Aoi.

At the time Aoi was seen as an easy-going girl who got on with everyone. As she spent her junior high years playing basketball, those around her see her as a star that’s out of reach. Meanwhile, Sahoko works hard at her image, hoping to come across as a popular girl and attract the eyes of all the boys. Deep down, she’s envious of how effortlessly Aoi can interact with everyone but she’s about to find out that Aoi’s life is anything but perfect…

Wanting to get to know Aoi, Sahoko chases her around the school before accidentally stumbling and sharing a kiss with the girl. Afterwards, Aoi begins avoiding her, but Sahoko desperately wants to set the record straight and start over as friends. Eventually, this leads her to join the Home Economics club, where the unpopular kids hang out and which Aoi calls home.

As Sahoko spends more time with Aoi, she begins to learn why she quit basketball and, most importantly, that she’s not as easygoing as she first seemed. With younger brothers relying on her at home, Aoi can’t afford to be in a demanding club or worry about being a popular girl. Her lifestyle is completely different to Sahoko’s and as they say, opposites attract!

To us readers, it’s clear that first love is beginning to blossom between Sahoko and Aoi, but from the present-day content at the start of this volume, it’s also clear that something happens to break these two apart. What happens is a mystery I’m sure the series will wait a while to tell us, but from this first instalment, I’m certainly intrigued to find out what it is!

The creators behind Chasing After Aoi Koshiba are Hazuki Takeoka (Masamune-kun’s Revenge) and Fly (illustrator of Bottom-tier Character Tomozaki-kun). Both Takeoka and Fly are talented, with numerous credits to their names, although it’s Fly’s first time working on a manga series rather than one-shots or illustrating for light novels. This leads to a polished first volume with a strong story and wonderful artwork to match.

Fly’s designs are cute and full of emotion. Since scenes frequently swap from being comedic to emotional, it’s important that the art is strong enough to convey that and it does here. I also appreciated how easily Fly conveys Sahoko’s frankly ditzy personality. It’s a lot of fun just watching her antics across the book.

In terms of the story, there is a lot to digest but I like the direction it’s going in so far. Especially if our time is spent in the present as well as the past, which the end of this volume does seem to indicate. I also like that it’s not a stereotypical yuri. Sahoko doesn’t say that kissing Aoi was a mistake and they’re both girls so it couldn’t be romantic; Chasing After Aoi Koshiba takes no such stance, which is refreshing in a genre packed with characters who are dismissive of their sexuality. So, there is certainly a lot of promise here for those looking for a new coming-of-age story.

As previously mentioned, Chasing After Aoi Koshiba Volume 1 comes to the West thanks to Kodansha Comics and has been translated by Alexa Frank. The translation reads well with no issues to note. The series is ongoing in Japan at two volumes and Kodansha has the second scheduled for an English release in the summer.

Overall, Chasing After Aoi Koshiba Volume 1 is a delightful coming-of-age series in the yuri genre. With relatable and entertaining characters leading us through an emotional story, I’m eager to see what future instalments have in store for us!

A free preview of this volume can be found on Kodansha’s site here. 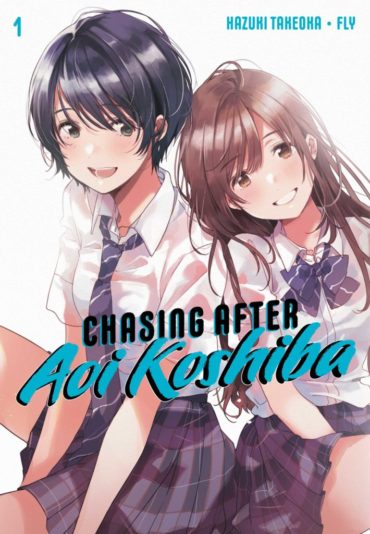