Recently we’ve seen an uptick in the number of light novels revolving around protagonists who specialise in being an assassin. Here to offer a new spin on these series is Yen Press’ latest light novel release, Hazure Skill: The Guild Member with a Worthless Skill is Actually a Legendary Assassin. Does it offer an interesting read? Let’s find out!

All Roland wants is to stay out of the spotlight and retire as an assassin, so he asks the king for the opportunity to live a normal life. This request is granted and Roland sets out for the small town of Lahti where he begins job hunting. Although our hero isn’t all by himself…

Instead of killing Rileyla, it turns out that Roland slipped a mana suppressing collar on her which also turns her into a cat (although she can take human form). Having left a body double behind, Roland is confident no one will know the demon lord is still alive and although living with her contradicts what it means to live a ‘normal’ life, he does value her company.

It’s not long before Roland finds himself a job working at the adventurers’ guild. Although he tells his boss he has no real experience as an adventurer nor any special skills, he still gets taken on and quickly learns the ropes. In actuality, Roland is more capable than anyone working there (except perhaps his boss), but he does his best not to show it in case it brings an end to his quiet life. Although when all the adventures he helps begin to show shocking results, it’s not long before his coworkers work out Roland is anything but normal!

Going into Hazure Skill I was quite excited about what would come out of the premise of a hero turned ordinary guild worker. In stories like this, it’s rare for us to see characters working for the guild rather than just using it as a home base or picking up information there. Unfortunately, the series doesn’t capitalise on this premise and instead gets distracted with Roland sleeping with a variety of the cast, multiple times in the first volume.

I didn’t particularly mind the references to Roland and Rileyla sleeping together, to begin with, since it seemed like a solid relationship, but once it became apparent that Roland had no loyalty to her, I grew frustrated. Not least because when Roland is working, the story is vaguely interesting, but when it gets away from that, there is nothing valuable here.

It also doesn’t help that as the book went on, the writing became inconsistent. Midway through, Roland finds an unconscious slave girl and brings her home to help her recover but, to begin with, he says he won’t help her beyond this. A chapter break later and Roland is treating her almost like a daughter and vowing to make her a strong adventurer. There is nothing here to signify why Roland’s opinion changes so drastically and I was left thoroughly confused by the development.

None of this was helped by the fact that Roland isn’t a very original character. He perfectly fits the stereotypical overpowered hero template and his personality is somewhat obnoxious (not helped by the fact all the female cast fall all over him, it has to be said). Things don’t fare all that better with Rileyla, who should be a fearsome individual, thanks to being the demon lord but she’s reduced to nothing more than a pitiful damsel in Roland’s company, which is disappointing, to say the least.

Usually, in a series like this, I can overlook a lot of the issues if there is one element I can enjoy, but this time around, the negatives really do outweigh any of the positives. This is such a shame since I like the concept, but there are undoubtedly other light novel series doing similar things that I could read and enjoy instead.

What’s even more surprising about this is that Hazure Skill’s author Kennoji is quite experienced with seven published series to his name – one being Drugstore in Another World: The Slow Life of a Cheat Pharmacist released by Seven Seas in English. Perhaps because of this, I was expecting the book to be far better than it ended up being. Although this series is based on a web novel, so perhaps that’s where some of the inconsistencies in the writing come from.

As previously mentioned, Hazure Skill comes to the West thanks to Yen Press and has been translated by Jan Mitsuko Cash. The translation reads well with no issues to note. The series is ongoing in Japan at six volumes and Yen Press have Volume 2 scheduled for an English release in September. They are also publishing the manga adaptation.

Overall, Hazure Skill Volume 1 is an unremarkable read that does nothing with the interesting concept it has going for it. Instead, the series doubles down on the more negative aspects which make for a book that is incredibly difficult to recommend to anyone. 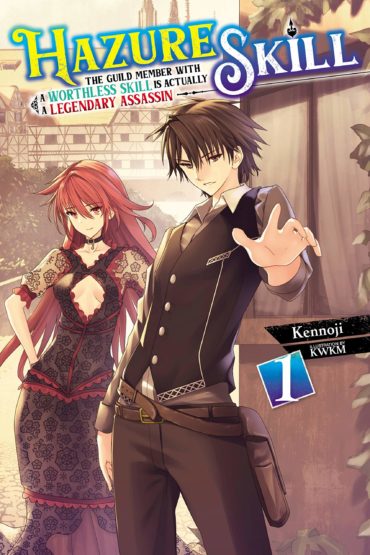 Title
Hazure Skill: The Guild Member with a Worthless Skill is Actually a Legendary Assassin Volume 1

Going into Volume 2 of The Girl I Saved on the Train Turned Out to Be My Childhood Friend, protagonist Ryou has shot down the romantic advances of a friend, proclaiming no one but Hina feels right being by his side. With these words in mind, will any progress be made between the two?