At the end of 2021, I reviewed Volume 1 of The Girl I Saved on the Train Turned Out to Be My Childhood Friend, a rom-com from author Kennoji with illustrations by Fly. Despite my concerns at the time, I’ve stuck with it to find out if Volume 2 can put my worries to rest. Let’s find out!

In the first book, we met protagonist Ryou Takamori who saved his estranged childhood friend Hina Fushimi from harassment on the way to school one morning. Since then the two have grown close again and it’s clear Hina holds romantic feelings for Ryou, something he finally realised at the end of Volume 1. However, despite knowing how Hina feels (and having rejected friend Shizuka Torigoe), Ryou has made no movement in actually dating Hina.

So this volume is spent more or less like Volume 1. Ryou hangs out with Hina after school and on weekends and his lunchtimes are spent in the science room with Torigoe. Now that feelings have been laid bare, Hina wants to start dating Ryou and throughout this volume, she tries to make some progress between them – even going so far as to have the two share a kiss.

Frustratingly, despite Hina being so aggressive about it, nothing changes on the romance front. In the best case, Ryou seems content to leave things as they are; worst case, he worries he would bring her down if they were to begin dating. In the meantime, Torigoe wonders if she may still be able to turn Ryou’s head and goes on the offensive and yet another childhood friend is introduced into the mix. It’s all quite messy when it comes to love!

Outside of that, this volume also reveals that Hina dreams of becoming an actress in the future. She’s even been taking classes to achieve her dreams, unbeknownst to Ryou and the rest of the cast until now. I like this plotline since it gives Hina ample character development separate from her relationship with Ryou and also shows that she has dreams for the future, something that contrasts nicely with Ryou whose unsure of what he wants to do after high school.

However, one of my biggest criticisms of Volume 1 was the fact that it seemed like the romance wasn’t going to go anywhere and that almost put me off continuing. Now that we’re in Volume 2 and there is still no movement I’ve lost all interest in carrying on. It’d be one thing if Hina was shy and didn’t try to initiate, but that’s not the case and I think the author does her a disservice by not having her efforts be rewarded at all.

Maybe what frustrates me most is that author Kennoji could have had something a little more unique on their hands if they did get Hina and Ryou together. The subplots of Hina’s dream and Ryou figuring out his path forward would have been great alongside the two taking their first steps together as a couple. But instead, we’re stuck in this loop of ‘will they, won’t they’ which does no one any favours. And frankly, when it comes to series stuck in endless loops, there are many with way less annoying protagonists than Ryou.

The Girl I Saved on the Train Turned Out to Be My Childhood Friend Volume 2 comes to the West thanks to Yen Press and continues to be translated by Sergio Avila. The translation reads well with no issues of note, which is nice after Volume 1 needed another proofread. Volume 3 of the series is scheduled for an English release in October. Yen Press has also started releasing the manga adaptation.

Overall, how much you enjoy Volume 2 of The Girl I Saved on the Train Turned Out to Be My Childhood Friend will come down to how much patience you have for the romance not moving. If you enjoyed Volume 1, then this is more of the same, but if you found yourself already put off like me then you’re unlikely to want to read more of the same. An unfortunate situation when there are some good ideas here! 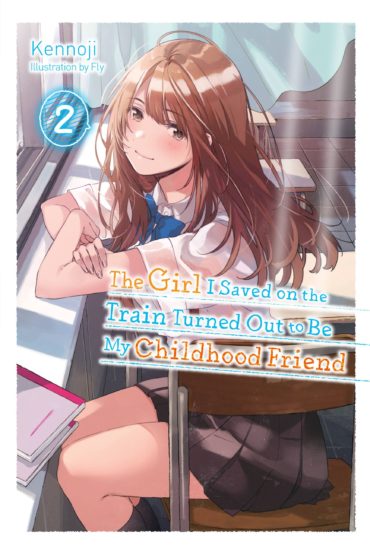 Hazure Skill: The Guild Member with a Worthless Skill is Actually a Legendary Assassin Volume 1 Review

In Hazure Skill: The Guild Member with a Worthless Skill is Actually a Legendary Assassin, protagonist Roland defeats the demon lord and wants nothing more than the freedom to have a normal life in return. Now the hero is turned into an ordinary adventurers’ guild worker in this new fantasy series.