“I think our son is probably gay. He’s really cute and sincere, to boot.”

Hiroki Aoyama has just started high school. He lives with mother Tomoko and younger brother Yuri; his father Akiyoshi is often away from home on work. Hiroki’s an outward-going teenager who’s getting good grades, enjoys playing games (the electronic kind, not school sports so much!) and tends to say what’s he thinking aloud before engaging his brain. A typical conversation over dinner will almost always include him merrily blurting out his innermost thoughts, realizing what he’s just said, turning bright red and loudly correcting himself. A discussion about corn in his mother’s curry leads to him observing, “It’s okay! If I wanna eat it when I’m older…I’ll just find a boyfriend who’s great at cooking and get him to make it for me!” After a two-panel pause, he then hastily corrects himself, “Guh – ! Girlfriend!! Girlfriend!! I totally meant girlfriend!! Funny, I keep saying the wrong word!!”  while younger brother Yuri just continues eating and Tomoko observes to herself, Our son often slips up and says ‘Boyfriend’ instead of ‘Girlfriend’. Honestly…he’s so bad at lying.

We follow the day-to-day life of the Aoyama family, mostly through Tomoko’s eyes. She’s thrilled when Hiroki invites a new schoolfriend Daigo back for a games-playing session. A hand towel sets off memories of an earlier middle school friendship of Hiroki’s that didn’t turn out so well. And recollections from Hiroki’s nursery days when he quite happily ‘smooched’ other three-year-old boys because that’s what Akiyoshi does to his young sons as a ‘welcome home’ greeting, so little Hiroki naturally does it too.

So Tomoko is the main viewpoint character and, like many parents, has a pretty accurate understanding of who her elder son is and what makes him tick. She’s not bothered, it seems, by the fact that he is probably gay and is both amused and charmed by his clumsy attempts to share and/or hide this from her. He’s most likely trying to present an image of himself to her as the son he – perhaps – imagines she would like him to be but constantly keeps Freudianly slipping up. Is she aiding and abetting this deception? Is she playing along because she feels it will make him more comfortable about his desire to pretend that he’s straight? At some stage there’s going to have to be that conversation between them…but until then, the little game continues. The reappearance of absent father Akiyoshi stirs things up more than a little. By the by, Tomoko seems perfectly happy with the way things are with her husband away for long periods of time, which makes you wonder when you begin to unpack it, exactly what kind of a marriage this is – but that story would be material for quite a different manga!

As for breadwinner Akiyoshi, when he returns home for a brief holiday, the topic of a TV drama Lover Men that the young women in his office are enthusing about comes up over dinner. Akiyoshi’s attitude to the subject matter is predictable. “Well, no matter how entertaining they say it is…seeing two guys kiss and stuff is pretty gross, isn’t it?!” he says, laughing. This provokes a big reaction from Hiroki, declaiming loudly, “Two dudes? Whatever were they thinking?!” When Tomoko asks her husband, “Did you actually watch the show?” and, of course, he hasn’t, she goes on to gently suggest that it might give him a topic of conversation with his young co-workers and even change his mind.

I Think Our Son Is Gay is yet another LGBTQIA+ manga that began life on ‘social media’ as have several of the titles we’ve reviewed here recently. I first encountered Okura’s work in That Blue Sky Feeling (VIZ Media) in which his original web comic was re-drawn by mangaka Coma Hashii and which also dealt with teenage years, discovering one’s sexuality, and making friends. In this new series we see that Okura’s own art style is attractive (there were little glimpses of it in the author’s afterwords in the earlier work) with a cartoony vibe to it (not a criticism) and many great reaction shots. The humorous gag vibe also comes across in the well-judged pacing of the short chapters as each one builds to a neat little pay-off while often managing at the same time to quietly emphasize an underlying point about tolerance and understanding.

However – and there is a however – I’m intrigued by the fact that, although this seems to be aimed at readers around Hiroki’s age, how will they feel about constantly seeing Hiroki from his Mom’s point of view? Tomoko comes across as impossibly benign and understanding, given her (mostly) absent husband and her lovely but nevertheless teenaged sons. Discussing parenting issues with your partner via the phone is not quite the same as having them there to support you when things get tough. Although I like the fact that she’s quietly rooting for Hiroki while letting him come to his own conclusions about his sexuality…when he’s ready to do so.

My favourite character is the stoical younger brother Yuri who is adept at calmly covering for his older brother and probably understands instinctively what’s going on, without giving anything away – or getting involved.

This relatively slim volume from Square Enix Manga is the first of three (so far), with a pleasing translation from Leo McDonagh that captures the family conversations around the meal table convincingly and a colour page at the beginning. Kudos also to letterer Lor Prescott for delivering the many different modes of speech, inner monologue and sound effects in a way that brings the story vividly to life.

I Think Our Son Is Gay delivers an entertaining and feel-good read and the Teen rating means it will make a good addition to the LGBTQIA+ shelf in senior libraries. 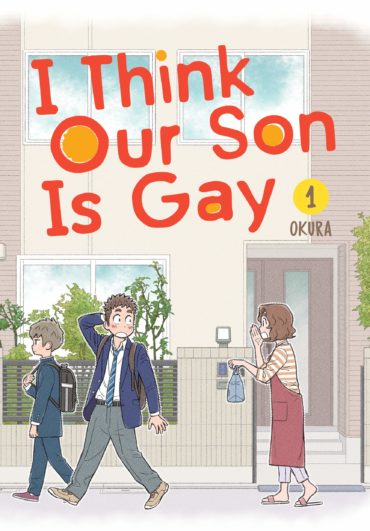 Title
I Think Our Son Is Gay Volume 1