“Our son has his own way of thinking and his own definition of happiness.”

Tomoko Aoyama’s elder son Hiroki is not skilled at hiding his thoughts and feelings. He has a tendency to blurt out some reactions such as “What a hot bod!” when catching sight of a muscular sportsman on TV – and then do a double-take, blushing furiously and insisting, “I wasn’t going for anything weird, okay?!”. He’s also ecstatically happy whenever he’s in the company of classmate Daigo which leads Tomoko to think he’s maybe crushing a little too hard for this to be a simple friendship. Meanwhile the year comes to a close, Tomoko’s husband Akiyoshi (still based abroad for work) comes home for the holidays and the family visit to the local shrine for New Year. A games-playing session with father and son causes problems as it’s a particularly gruesome horror title (recommended by Daigo!) which freaks Hiroki out. Dad, being macho, insists that, “Guys don’t scream and cry like that,” only to be genuinely surprised at Hiroki’s instant comeback, “Hey! Even guys get scared by scary things!” as he thrusts the gamepad into his father’s hands.

But then, out shopping, the family bump into their neighbours, the Ogawas… and their teenage daughter Asumi. Hiroki says, “Woah! Shocker! You got so pretty…I didn’t even recognize you.” Asumi, a year younger than Hiroki, will be starting at his high school and although she’s displaying all the familiar signs of a self-conscious teenaged girl out with her mother: embarrassment, blushing, indignant resentment at being talked about, all the usual, perhaps Hiroki’s words have broken the ice. After all, they used to play together when they were little. Several chapters later, Hiroki and Asumi are setting out for the new school year together, so maybe there’s a budding friendship there. Although, there’s also the possibility being set up that Asumi may have mistaken Hiroki’s words for more than friendship…?

I Think Our Son is Gay continues the same format as before with twenty short chapters depicting family life as seen by Tomoko and her musings on how Hiroki and younger son Yuri are growing up. This is an intriguing take as the viewpoint character in BL is usually one of the protagonists in the central relationship – something we almost never get to see from a parent’s point of view. In my review of the first volume, I couldn’t help wondering whether – sympathetic as Tomoko’s observations about her elder son are – seeing Hiroki’s life from an older parental perspective might come across as distancing for younger readers of Hiroki’s age. On the other hand, it could be reassuring to read about a parent who understands their son’s feelings as he comes to terms with his sexuality (not that this series has dealt with anything remotely explicit apart from Hiroki admiring male biceps on the TV, let alone the challenges of puberty).

One theme that Okura develops further is the ripples created by a popular BL TV drama Lover Men. Tomoko is working at Steamy Bento, a fast-food outlet, where one of her female coworkers (evidently a BL fan) whispers to her that she thinks their handsome young manager is in a relationship with a “good-looking older man”, having seen them out shopping together. Tomoko borrows the manga of Lover Men from her, reads and enjoys it (I thought it might have some explicit scenes, but there weren’t any) whereupon Hiroki comes across the books on the table and does a double-take. Declaring loudly at first that men don’t read ‘stuff like that’, he relents when his mother says she really enjoyed it and she spots him later on, utterly engrossed. But if her manager is gay, she reasons with herself, perhaps she might be able to ask him how things were when he was growing up and how life is for him now…

It’s good to see how more nuanced Okura’s graphic style has become, moving the characters beyond slightly basic cartoonish (in the Western-sense) to a much more accomplished look and a better flow between panels. There’s a sense that the character interactions are driving the story onwards now from chapter to chapter and less of the feel of an expanded 4-koma.

Translator Leo McDonagh has delivered another very readable volume for Square Enix, seeking out US equivalents to make the dialogue flow in a natural way. And worth noting again that as this volume is rated Teen, it’s an ideal book to have in the senior school library PSHE/LGBTQI+ section.

Perhaps, most touching of all is the mangaka’s afterword in which he reveals that he came out to his own mother between the publication of the first and second volumes of the manga. It seems to have gone all right! 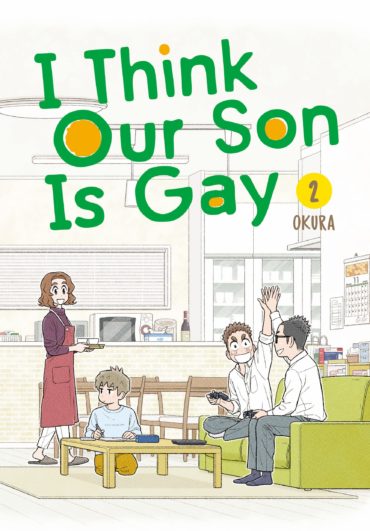 Title
I Think Our Son Is Gay Volume 2

I Think Our Son is Gay Volume 4 Review

Daily life in the Aoyama household goes on as Tomoko watches over her sons and wonders how life would be for her eldest if he were to come out as gay.