Tomoko Aoyama is almost certain by now that her elder son Hiroki is gay and, caring mother that she is, wants to support him, no matter what happens. And for some time, she’s suspected that he has a crush on his schoolfriend Daigo – while also suspecting that Asumi, the girl next door and Hiroki’s childhood friend, has a crush on Hiroki.

But one day Hiroki lets slip the news that Daigo has a girlfriend. Outwardly he seems to be accepting of the fact – but Tomoko worries that he’s bottling his true feelings up in making an effort to be supportive of his friend’s relationship.

Okura’s popular LGBT manga series has reached its fourth volume and even though Hiroki is the main focus of this manga, the main viewpoint character through whose eyes we mostly see Hiroki, is Tomoko. And, as I’ve said in reviews of the earlier volumes, I still think this diminishes to some extent the appeal of this undeniably likable manga to a potential readership of Hiroki’s age. If you compare this approach with Alice Oseman’s Heartstopper graphic novel series, everything is told from high school students Nick and Charlie’s points of view. Or in Sasaki and Miyano, we don’t get to hear what Mya-chan’s mother thinks of her son’s BL addiction. It’s churlish of me to criticize the manga for not being like other recent works about similar-aged boys, but it is unusual to have a story about teenagers told from a parent’s point of view. And when a chapter, late on in this volume, turns out to be told (mostly) from Daigo’s point of view about how he views Hiroki, I’m not sure it adds a great deal to what we’ve garnered for ourselves during the earlier chapters. The chapters where Tomoko chats with Mr. Tono, her outward-going, openly gay co-worker, are far more lively and enlightening.

Tomoko is depicted as a very sympathetic mother to her sons, and she agonizes over what she imagines Hiroki must be feeling as he tries to be a good and supportive friend to Daigo. Does Daigo guess how much Hiroki likes him? she wonders. Even if he does, he’s taken the girlfriend route and Hiroki has to find a way of coming to terms with this. Discussion with Mr. Tono about his high school experiences allows her to gain a more balanced perspective on Hiroki’s situation. Nevertheless, her other (female) co-workers are far less sensitive to Mr. Tono’s feelings, and there’s a significant scene in which one of them asks him to give a (female) friend some advice over her failed relationships because “You get how both men and women feel, don’t you?!” Mr. Tono politely declines, saying, “I’m a man… so I’m not sure I can tap into a woman’s feelings” but eventually gives into his persistent colleague, adding pointedly, “If she’s okay with me personally… and not just as ‘The Gay Guy’.” It’s impossible not to suspect that the mangaka himself might well have undergone this insensitive kind of interference socially, and even at work. Liking men doesn’t make you a woman inside, Tomoko observes. Mr. Tono was laughing and smiling, but he seemed a little troubled by it too. It made me rethink my assumptions.

When Tomoko hears that the little chat never really got into personal issues but focussed on discussing favourite TV shows, she finds herself thinking, Gender doesn’t matter when it comes to things you love. Here, though as elsewhere, the mangaka sets up a potentially awkward social situation but almost immediately defuses it. The short chapter format seems designed for these equivalents of the one-liner and at this stage in the narrative, it feels a little like short-changing the readers. Okura is definitely playing safe. True, it means that he can deliver a plot point or a neat little observation on tone-deaf attitudes to being gay in today’s society – or to marriage, when Akiyoshi recounts to Tomoko what happened at work when a younger colleague announced that he was getting married. But that’s as far as it goes. And maybe that’s as far as he’s prepared to go, given his distinctly cartoonish graphic style, emphasizing the humour in the day-to-day situations Tomoko encounters and ultimately shying away from the more difficult issues.

Perhaps, though, the most significant moment in this fourth volume of the slice-of-life story is the afterword in which Okura reveals that these chapters were written during the pandemic lockdown. He reflects on how difficult it must be for those at school to be deprived of the usual routines of school life such as the culture festival and the class trip away – unlike the characters in the story who are living in a Covid-free world. We have yet to see the ‘everyday life during the pandemic’ manga, with the variations that could be developed on the trademark high school romances having to be carried on via Zoom or Line instead of face-to-face.

Square Enix Manga again brings us a very attractive trade paperback edition with good quality paper and a colour page at the front. The translation is again by Leighann Harvey and with Lor Prescott’s lively and varied lettering, both make an excellent job of putting the humour of the series across. We’ve caught up now with Japan at four volumes, although new chapters can be read online in Japanese.

Read a free preview of Volume 4 on the publisher’s website here. 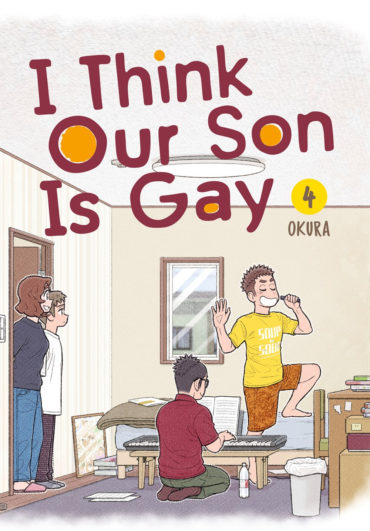 Title
I Think Our Son is Gay Volume 4