If you are already familiar with this manga, you will know that it is a sadly short-lived series. In March it was reported that I’m The Catlords’ Manservant, which began in October 2019, would publish its final chapter in the April 2021 issue of G Fantasy magazine. The final print book will be the fourth volume.

However, just because a series is short does not mean it is not without merit. Reading this first volume, it seems to explore some familiar territory in a peculiar way. I would argue that this series is an unusual take on the harem genre – and that’s unusual because while most harem series see a boy surrounded by girls or vice versa, and occasionally some same-sex harems, this one I would argue sees a central figure surrounded by characters of an entirely different species.

The series begins with schoolboy Yukiharu Izumi. His parents died during a holiday and, to make things worse for Yukiharu, he discoveres that his father Shuu took out a ¥50million loan before his death. Because the loan cannot be paid back, the house Yukiharu is living in is demolished. However, Yukiharu learns that Shuu left him keys to another house, where someone called Miyako lives.

As Yukiharu arrives at this rather grand house, he hears a noise coming from inside. He bursts in to find five occupants fighting amongst themselves, one of whom is Miyako, a smartly dressed but stern man. Actually, “man” is the wrong word. These five individuals were actually Shuu’s “pets”, in the form of bakeneko – shapeshifting cat spirits, whom both humans and cats often consider to be monsters, but whom Shuu adopted and looked after. Yukiharu thus realises that the loan his father took out was to buy this house for these spirits to live in.

As the house was a gift, the bakeneko have no intention of giving it to Yukiharu, but they offer him a deal: they will shoulder all of the debts Shuu owned, but Yukiharu must become their servant. Reluctantly he agrees, meaning he has to wait on these five cats hand and foot/paw.

Miyako appears to be the unofficial leader of the group. He is a Russian blue cat who works as a maths teacher in his human form. When Yukiharu transfers to a new school, inevitably Miyako becomes his homeroom teacher, with them pretending to be cousins. Two more bakeneko from the house are students in his class. There is the black cat Akira who is always excited and often comes across as creepy; and orange tabby Susumu, a glutton who was a stray Shuu rescued. The other two are Kyou, a ragdoll cat who in his human guise works as a host; and finally Tohru, about whom we get little information in this opening volume.

The main feeling that you get when reading I’m The Catlords’ Manservant is that while it does not appear to be marketed as such, this certainly feels like a harem manga, and a quick look at other reviews of the series seem to show similar feelings. It does fit into the standard harem troupes, but instead of characters of different genders being the main focus, it is a human surrounded by cat spirits, all of whom appear to be male. It is a fun idea, and creator Rat Kitaguni (I’m guessing that’s not their real name) does have some cool character designs for the humanoid versions of the bakeneko. These designs also change dramatically, as these spirits have their own powers. While in their humanoid forms their only cat-like features are normally their teeth; they can also make themselves more powerful, at which point they adopt more traditional catboy-like features such as tails and cat ears, but also longer hands and claw-like fingers.

As with any harem series, you end up picking your favourites. At this point, my personal favourite is Akira, mainly because of the comedy he provides. This chiefly comes from this cheery black cat coming across as creepy when he wants to do things that he considers fun, such as wanting to play with Yukiharu in the dark or giving him mice as a present.

Sadly, as highlighted in the opening of this review, it is an idea that is short-lived. It is a nice, entertaining way of changing what many might consider to be a dull genre, that needs something new to revitalise it. It is also annoying for Yen Press, who announced that they had licensed the series six months ago, and just before they released it learned that the series had been put down.

Regarding translation, I’m not entirely sure of how I feel regarding Alexandra McCullough-Garcia’s choice to remove accents from names, as presumably Shuu is really “Shū”, but it does help the reader with the pronunciation. I’m also unsure about putting the translation notes directly after the first chapter, meaning they are explaining things in the book that have yet to come up and thus they come across as minor spoilers. I do however, like Rochelle Gancio’s lettering, and the use of different fonts to convey different moods, such as the use of bolder typefaces for when characters are angry.

It will be interesting to see how it progresses, with the end of this volume revealing what appears to be an antagonist, but at the same time this is going to be tinged with the feeling that this series is not going to live up the full potential the author was probably hoping for. 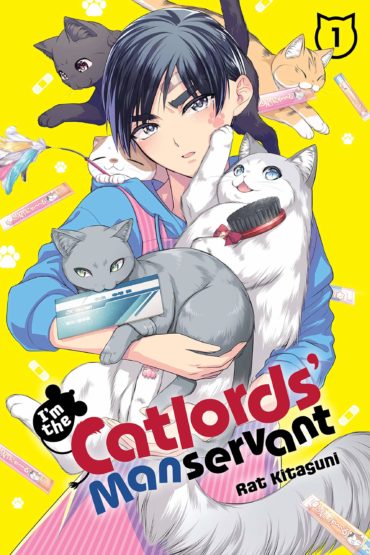 Ghosts and a portion of hotpot are offered in the second volume of this feline harem series.