Warning: This is an 18-rated title, described by the publisher as containing strong language, nudity and sex.

While Yen Press has stuck all these warnings on this title, and for all I know later volumes of this series may get raunchier, to me the biggest problem with this title is Yen giving Sex Ed 120% a “Mature” rating. Having read it, an “Older Teen” 16+ rating would seem to be more fitting, given the setting and what has so far been covered. This is by no means a pornographic title, with the “Ed” being just as much of a focus as the “Sex”.

This comedy follows Naoko Tsuji, a Health and P.E. teacher at Sakuragaoka Girls’ High School. She is concerned, perhaps rather too much, about the way sex is taught in schools – or in Japan’s case, how it is not taught. With the country’s declining birth rate, and with people deciding to have sex at too young an age or not at all, she believes that Japan’s decision to hardly deliver any sex education at all is wrong. Thus, Tsuji-sensei decides to take matters into her own hands.

Tsuji therefore goes out of her way to bombard her students with all kinds of information about the right way to have sex: she teaches her students about contraception while giving out condoms and dental dams to her pupils, and tells the girls in her class about masturbation. Her students, however, have their own individual problems. One of her classes has three particular girls in it: Matsuda is an otaku with a passion for Boys’ Love manga; Moriya is a closeted lesbian in a relationship with another girl in a different class named Aikawa; and Kashiwa from the biology club is more interested in animal sex and especially her pet cat – leading to some confusion when she refers to her “kitty” as in Japan this is LGBT slang for a submissive partner (thanks to the manga’s translation notes for that info). As for Tsuji, her main problems seem to be with her fellow members of staff, with her often getting into friendly rows with the school nurse Nakazawa.

For anyone worried that this title is just plain ecchi, don’t be. Sex Ed 120% has a surprising amount of depth and detail to it. When it comes to detail, the written material makes the manga a surprisingly long read for an opening volume that is only 130 pages long – there is so much writing that I do feel somewhat for the letterer Sara Linsley, who has had to insert a lot of written material in these small elongated speech bubbles.

There are other important topics brought up in this manga too, including LGBT issues. One chapter sees the closeted Moriya coming out to her classmates, and being treated with respect by all those around her. In another, Tsuji and Nakazawa are in a love hotel district, and react angrily when they learn that one hotel is turning away gay couples, so Tsuji stitches up the homophobic owner.

The chapter that sticks in my head the most however is the one concerning Kashiwa, who decides to create an exhibition about animal sex to promote the biology club during the school’s cultural festival. This results in her giving out several facts about animal sex, such as the fact that elephants, platypuses and whales don’t have scrotums.

As for the production, the lettering, as mentioned, is rather stretched, but I think Linsley pulls everything off successfully. The artwork by Hotomura is good too, and when it comes down to the more adult side of things it is sexual without it being full-on pornographic. Regarding the translation, Amanda Haley seems have done an OK job, but there are times when I think that either she or author Kikiki Tataki has missed something. For example, the end of each chapter has an “extra lesson”, and in one of them Tsuji teaches Nakazawa slang for the female genitalia. While the list is long, and for an American translation surprisingly includes “fanny”, which must confuse some American readers who thought that just meant the backside, there are some other British and Irish terms missing from the list. However, there are other production elements that come off well, especially in terms of research, with the manga listing multiple references sources that were used to help with writing the series.

I am still annoyed however that Yen Press gave this series a mature rating. I can understand some of the concerns they might have had, but given the subject and that the fact this is not pornography, I think that this is something that may well help in actual sex education in a fun way. It may be too much for those just starting to learn about sex, but for 15-16 year olds I can see it being useful as well as entertaining. 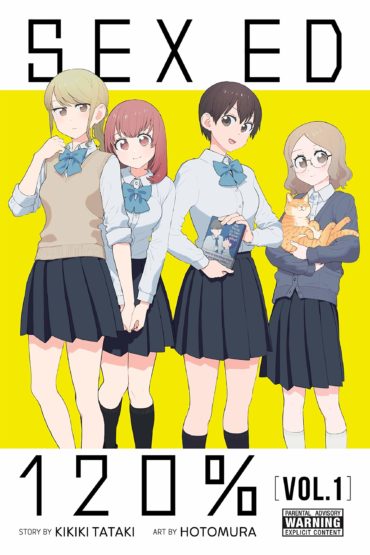 Naoko Tsuji has been teaching her pupils a lot about sexuality, but when she falls in love, can she deal with her own?