Warning: This is an 18-rated title, described by the publisher as containing strong language, nudity and sex. See also Volume 1 and Volume 2.

PE teacher Naoko Tsuji has done sterling if somewhat unorthodox work in teaching her pupils all about the subject of sex, but in this final volume it is she herself who faces the biggest test of all.

While this volume opens and at first carries on in the same manner as the other two, with each chapter seeing Tsuji teaching her students various aspects of sexuality, which in this volume covers the transgender community, pregnancy, and the history of the LGBT movement, Tsuji eventually has to come to terms with her own sexuality and feelings. We learn that she is bisexual and that she has fallen in love with Nakazawa the school nurse. Thus, the main plot of this final volume concerns Tsuji confessing her feelings and hoping that Nakazawa feels the same way.

The main group of students: Boys’ Love manga lover Matsuda, lesbian Moriya, and animal-loving Kashiwa help to play an important role in how this story develops. They are the first people Tsuji talks to when she reveals her true feelings for Nakazawa when they are all on a school trip to Osaka together. While on the trip, Tsuji teaches the girls about elements of LGBT history, including the formation of gay bars and mix bars, which leads to the girls deciding to create a mix bar for the forthcoming school cultural festival. This bar leads to the best comedic moments in the volume, with the bar being called “Sexuality Crossing”, in reference to the video game Animal Crossing, complete with a sign for the bar made in the style of the game’s logo and the bar being decorated with balloon models – except they use condoms.

This final volume of the series does contain the educational side we have come to expect from the previous two volumes, giving information on things like the costs of certain pregnancy-related items in Japan like pregnancy test kits and morning-after pills. However, this eventually fades away as the plot moves onto the ‘will they/won’t they’ romance between Tsuji and Nakazawa.

However, as many reviewers including myself have commented when covering the other volumes of Sex Ed 120%, one of the major issues is why Yen Press gave the series a “Mature” 18 rating when it is generally aimed at teenagers. I’ve seen comments suggesting that it may be to do with Yen selling the series to other countries, and that even an educational manga like this one would be hard to sell in some countries.

I think I might have my own theory. The chapter about pregnancy in this volume is not just about pregnancy. The chapter heading is: “Pregnancy and Abortion”. Given how abortion and the whole pro-life/pro-choice debate is such a big deal in the USA, I wouldn’t be surprised if this was the reason why an American publisher would feel the need to give a series like this a “Mature” rating. I can testify to this personally: I went to a Catholic school, and the way abortion was covered was very different from the way it is covered in Sex Ed 120%. In the manga, PE teacher Tsuji and nurse Nakazawa act out a skit to teach the students about it, and she is clearly pro-choice; at my school, I was taught about abortion by my incredibly fearsome late RE teacher, and we were given presentations by pro-life activist groups, including a slide show featuring photos of aborted foetuses. It was stomach-churning for me to watch when I was about 14-15, and I would argue more deserving of a “Mature” rating than what appears in this manga. I can tell you that this slide show is the main reason I’m pro-choice.

Sex Ed 120% has been a fun read and it is a shame it only had a short run. It has been one of my favourite manga of recent months and one I would wholeheartedly recommend. 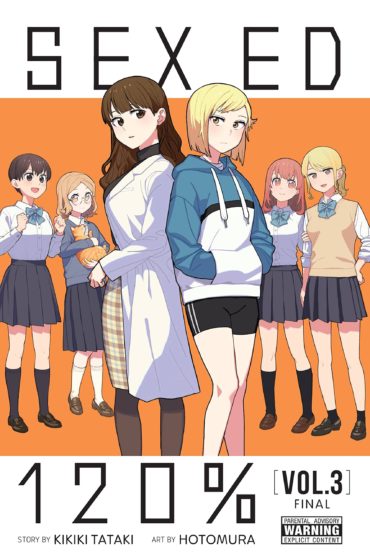