Protagonists being reborn is nothing new in the light novel world, but it’s usually accompanied by transportation to a new world and becoming something completely different from the human being they once were. So what happens if you’re in the same world and simply reborn as an undead? Well, that’s what we’re going to find out with Yen Press’ new title The King of the Dead at the Dark Palace.

The story follows End, a sickly boy who died of an incurable and extremely painful illness. However, our protagonist is shocked when he awakens one day as an undead with all of his memories intact!

Now in a properly functioning body (even if it is barely more than a corpse), End is excited to make use of his second chance in life. Unfortunately, his rebirth is thanks to a powerful necromancer (called Horos Kamen) who is hoping to create the ultimate undead, so End is far from having any freedom of his own. If he wants to survive and gain a new life for himself, he’ll first have to find a way to kill his summoner.

The one advantage End holds over his master is the fact that lowly undead aren’t usually able to think for themselves, so Horos has no idea that End has both intelligence and is thinking about betraying him. This is especially important because as the summoner Horos can command End to do anything he wishes and these commands can’t be broken, if Horos catches on to End’s lies, that will certainly bring an end to any chance of freedom.

In the hopes of making End evolve into more powerful forms of undead, Horos takes him into the forest surrounding his home to battle the beasts that live there. It doesn’t take long for End to change from an undead into a ghoul and the new abilities that come along with it mean that End is steadily gaining ways to defeat Horos, while still pretending he’s an undead who can do nothing but follow orders.

Since Horos spends all of his time in his laboratory when he’s not training End, our protagonist has free rein to explore Horos’ manor. Provided he doesn’t get caught by any of the other undead minors (like skeleton knights) or the slave Lou, End can read all the books in the manor to gain knowledge as well as do some extra hunting in the forest.

This first volume is presented as a cat-and-mouse game of sorts. End wants his freedom and needs to kill Horos, which Horos is working his hardest to get End to evolve further as an undead and once he’s achieved that, who knows what unspeakable things he’ll get up to. While initially you’re left wondering if this is the set-up for the whole series, it quickly becomes apparent that End’s time with Horos will end in this book, one way or another.

Despite that, The King of the Dead at the Dark Palace has no intentions of being a single entry and author Tsukikage talks excitedly about his plans for Volume 2 in the afterword. In some ways, this is a shame since the book could have easily ended, but at the same time, I’m interested in seeing what comes next for End as a character. The only real downside is that this will be a very different kind of story, given how this instalment ends.

Despite the fairly grim premise, this series manages to both not be too gory and also have lighthearted moments while keeping the dark undertones running throughout. Since End has already died once and his life is ultimately far better now, even while under the ownership of Horos, he’s a fairly chipper main character. Maybe his single-mindedness to survive will get on your nerves, especially given his coldness toward Lou, but I think the strength of the setting makes up for that.

Author Tsukikage is someone readers may be familiar with from Defeating the Demon Lord’s a Cinch (If You’ve Got a Ringer), or Let This Grieving Soul Retire!. Tsukikage is good at setting a scene and presenting action scenes that are easy to follow and visualise, but it has to be said that a lot of their series go unfinished. Unfortunately, there hasn’t been a Volume 2 of The King of the Dead at the Dark Palace since Volume 1 was released in November 2019, so it’s starting to seem somewhat unlikely that this one will be continuing either. I’m not sure that’s a huge problem since Volume 1 does accomplish a lot and is more or less satisfying, but as previously mentioned, it ends with its sights firmly set on the future.

Even if there isn’t another volume in sight, I think this one is worth a look since the whole premise is very different to other light novels on the market. Yes, the becoming undead thing isn’t quite as unique (The Unwanted Undead Adventurer comes to mind…), but those usually don’t involve a master-servant relationship like this one.

As previously mentioned, The King of the Dead at the Dark Palace Volume 1 comes to the West thanks to Yen Press and has been translated by Andrew Prowse. The translation reads well with no issues to note. This release includes two bonus stories at the back of the book, which are nice to have, even if one doesn’t work if there aren’t further volumes released. Illustrations are handled by Merontomari (The Game Master Has Logged In to Another World) and they capture the cast well but there aren’t that many, compared to the page count of the light novel and they’re not particularly memorable.

Overall, The King of the Dead at the Dark Palace Volume 1 makes for an interesting read. It may not be for everyone but with its intriguing and fairly original set-up, there is certainly fun to be had with it. I just hope this isn’t the last we’ll see of the series. 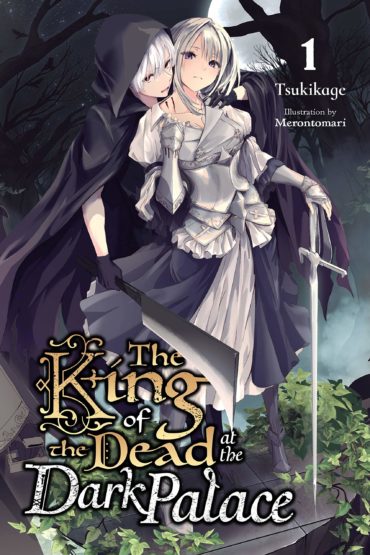 Defeating the Demon Lord’s a Cinch (If You’ve Got a Ringer) offers a welcome twist on the isekai tropes and fans of KonoSuba and series of its ilk will find a lot to like here.