It’s been several years now since Violet Evergarden started working as an Auto Memory Doll: someone who is hired to write and send letters on behalf of other people. Violet is now quite famous; from writing plays to love letters, she’s become beloved to the point of being booked up for months. However, daily, her mind wanders back to Gilbert, the Major who told her he loved her before his passing during the war, and although she has a full life, she cannot let him go. One day, Claudia happens to stumble upon an unopened letter and recognises the handwriting as none other than that of Gilbert himself. Is he still alive after all this time? And will this finally give Violet the opportunity to tell him how she feels?

If you’re a casual fan of Violet Evergarden or just never watched it and wondered where this film sat within the series’ timeline, here it is, briefly: despite the generic subtitle of the film, this is not a re-telling of the TV series or a reboot. It’s actually a sequel and gives Violet’s story a conclusive ending. Whilst the movie does make a few references and recaps to the characters Violet helped along the way in the film, it’s more of a reminder, rather than retelling. Luckily you can experience the full series of Violet Evergarden right now on Netflix and Blu-ray via Anime Limited (who licensed this movie as well). Also, just to make it super clear, there is another Violet Evergarden film called Eternity and the Auto Memory Doll, which is also on Netflix, but is NOT the same movie as this one. The first film is due to be released on Blu-ray later in 2021 and, luckily, you don’t need to watch that in order to understand what’s happening in this film. If you have watched the first Violet Evergarden movie and wondered how the two compare, I’m pleased to say that whilst Eternity and the Auto Memory Doll felt like several episodes of the series stitched together, this film is very much a movie through and through. From the pacing, to the cinematography, to the tone, this film does not feel like several episodes worth of content stretched out – it’s a satisfying and emotional conclusion to Violet Evergarden, the character and the series.

It’s at this point that, if you want to avoid any and all spoilers (including one hinted at in the poster) that I recommend you skip the rest of the review, and go and enjoy the movie, because it’s hard to discuss this movie without mentioning a huge part of both Violet’s character arc and the movie’s twist – the return of Gilbert. The man who both raised, nurtured and loved Violet was a looming, but also very absent, figure in the show. His words and actions meant everything to Violet, but it was all in the past, and her arc in the series was about finding a way to live without him after the war, and learn not only what love was, but also to experience it herself, or at least develop emotionally where she could learn to love. On paper then, his return would seem to threaten to completely undo what Violet went through in the series, and there are fans of the show who, understandably, cannot get past the huge age gap and emotional maturity differences between the two. But to this movie’s credit, because it takes place many years after the war, and Violet has lived a stable life in the meantime, it doesn’t feel like a cop-out because she’s proven that she can live and love without him. For what it’s worth, despite being one of those viewers who wasn’t sold on the relationship, and also not being a fan of the underdeveloped war backstory and Violet’s origins, I still got swept up in the story and emotional highs the movie accomplished.

Also, the themes of the movie, in conjunction with the parallel stories in the film, all work together to make it feel emotionally earned and substantial. Before we even get to Gilbert, we have Violet seeing to Yurith, a young boy in the hospital who wishes to write letters to his family before he passes. Whilst the stories themselves are quite different, the message of saying how you feel while you still can and forgiving yourself for your past mistakes so what you feel now can be said, rings true for both stories. Yurith, being sick and bed-bound, lashes out at his family due to not wanting them to see him this way, mirrors Gilbert’s actions of wanting to hide away from the world after the war because he feels he does not deserve to be with Violet. It’s also excellently portrayed visually how Gilbert is almost always obscured (even when the audience knows it’s him) by having him in shadows, his hat covering his face, off-face camera angles, and even the movie poster has him turned away; because, despite him telling Violet to move on, he’s the one who cannot escape the shadow of his past.

Another small plot point that builds across the film, and was even hinted at in the first movie, is technology and how it threatens to put the dolls out of work. The movie is framed with a third story from Daisy, granddaughter of Anna Magonlia (one of the many characters Violet helped from the TV series) who retraces Violet’s steps in order to understand the importance of all the letters her great-grandmother sent, and since it’s set in the future, telephones have now taken over as means of communication. Whilst I did not find Daisy’s story that interesting and her conclusion isn’t as emotionally satisfying, due to lack of development between her and her parents, I did think the handing off from letters to telephones, whilst maintaining the theme of communication and human connections, was nicely handled.

Animation is once again handled by Kyoto Animation, and if you think Violet Evergarden couldn’t get more beautiful, somehow it does! You just have to look at the last few shots with Violet by the ocean and see the stunning water effects to be in awe of how they can accomplish such stunning animation. When this movie comes out on Blu-ray, it’ll definitely be one to purchase on day one. Evan Call also returns to score the movie and whilst a few of the tracks are re-arrangements of TV series music, there’s also a lot of emotionally sweeping new tracks too. Also, the new slight re-arrangement of the ending theme ‘Michishirube’ by Minori Chihara was a nice touch.

Despite the generic subtitle, Violet Evergarden: The Movie isn’t just a film, but a heartfelt conclusion to one of 2018’s best anime series. It’s beautifully composed, written and animated, one to definitely not miss on the big screen. Also, you might want to pack some tissues when you go into the theatre, especially if the TV series managed to tug on the heart strings for you.

Violet Evergarden: The Movie will be in UK cinemas courtesy of Anime Limited from Thursday 1st July 2021, purchase your tickets here. 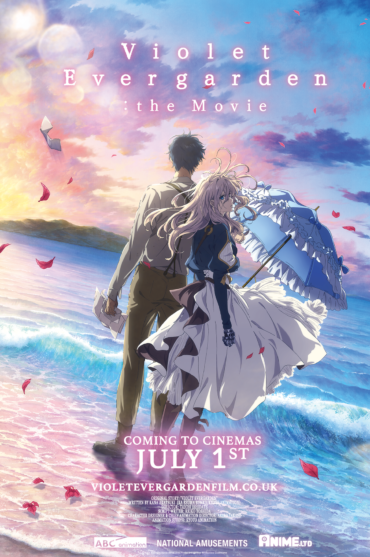 With the arrival of Violet Evergarden: The Movie on home video, fans of the series can now own the conclusion to Violet’s story.

The second Violet Evergarden movie will be heading to UK theatrical cinemas on 1st July, with a couple cinema chains now offering bookings!

The second half of Emma: A Victorian Romance, Violet Evergarden the Movie, more El-Hazard and Captain Tylor will each be available to pre-order in the UK for the month of June!