Back in April, Kodansha started releasing A School Frozen in Time under their Vertical imprint. Despite all the delays and issues in the publishing industry right now, they’ve still managed to bring all four volumes out within a year. Now with the final instalment in hand, it’s time to see if the conclusion manages to wrap the story up satisfyingly or not.

Before we get to solve the mystery of who died and whose subconscious the characters are trapped in, we’re treated to a flashback centred on Sugawara which then reveals that he’s actually Sakaki the homeroom teacher and Takano’s cousin (meaning Sugawara has been an illusion all this time) This chapter also shows us Takano’s history and how he’s lost someone close to him before, which feeds into his current drive to assure everyone that Mizuki couldn’t possibly be the one who killed themselves that day.

As it turns out, Takano is right and it’s not Mizuki that killed herself but Haruko, who was one of Mizuki’s close friends. This is certainly an interesting twist after Volume 3, which made us think it was Yutaka who committed suicide that day but, as I suspected, this ended up being a red herring.

Of course, knowing the truth doesn’t automatically mean everyone is safe and able to escape the school they’re trapped in. Takano is now faced with having to save Mizuki, whose life has hung in the balance of the most recent reveal. As of Volume 3, she’d started to doubt that she was still alive, especially as her friends began to believe she was the one behind their current situation. Takano just wants everyone to return home together but if that’s not possible, he will sacrifice himself to make it happen…

Throughout A School Frozen in Time’s run, I’ve worried that it hasn’t had enough time to flesh out all the characters while also moving along the main plot. This worry remains all the way through to this final book, where time is split between the flashback with Sugawara, as well as revealing why Haruko killed herself. All of that combined with finishing off the overall story is a lot for one book and I can’t shake the feeling that the original novel probably broke it up better than the manga has.

Having said that, I think the conclusion is a good one and the reasoning behind Haruko’s death as well as what’s happening with Mizuki is satisfying enough. I do worry that Haruko’s story is a bit stereotypical for these kinds of dramas and character deaths, but it reins itself in just enough so that doesn’t become a big issue for me. I also appreciate that the answer to the whole mystery isn’t obvious from the beginning, but if you look back now, there are clues to point you in the right direction.

I don’t think the story benefited from being split across four different volumes and for new readers, I would highly encourage reading them at the same time or at least significantly closer together than I have. It’s easier to keep track of who’s who and what’s supposed to be happening, which in turn amplifies the drama in a way that reading them several months apart doesn’t. I imagine it would also make the lulls in the action far less noticeable too, which would prevent the feeling of the story being all over the place which I often had with Volume 2 and 3.

As previously mentioned, A School Frozen in Time Volume 4 comes to the West thanks to Vertical and continues to be translated by Michelle Lin. The translation reads well with no issues to note and readers will be pleased to know that there are some translation notes at the back of the book to clarify a few references.

Overall, A School Frozen in Time has ended up being an interesting mystery series that keeps readers on their toes until the end. I’m not convinced this manga adaptation has been the best way to experience the story, but given it’s the only way to in English right now, it’s all we’ve got. At the very least, this is a satisfying conclusion that readers will appreciate, even if the road to get here has been somewhat bumpy. 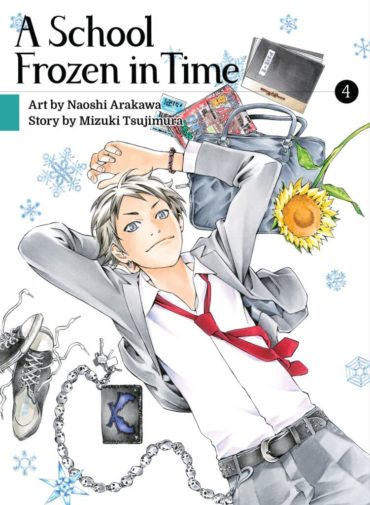 From the mangaka behind Your Lie in April and the author behind Anime Supremacy! comes a new work. Eight students find themselves trapped at school – and in order to escape, they must relive the day a fellow student died two months ago…