WARNING: This series contains graphic violence and rape right from the start.

This series is most certainly not for everyone. The opening scene sees the central heroine being kidnapped off the street, bungled into the back of a van, and a group of men trying to rape her. If that is too much for you, feel free to skip the rest of this review and indeed this release.

This horrific crime however is stopped however because the driver of the van, Yuya Nomoto, an economics student who has somehow found himself ringed into this horror, is so sickened by the whole thing that he crashes the van into a barrier. When he comes to, he is then shocked to find that the kidnapped girl is calm and composed, and orders Yuya to drive her to a scrapyard – for she has managed to kill all the men who tried to rape her.

At the scrapyard, Yuya encounters a man named Yugo Tani, who has come to challenge the girl, whose name is Hitomi Uzaki, to a fight. To Yuya’s even greater horror, he sees that Hitomi and Yugo transform into human-animal hybrids. Yugo appears unstoppable, given that he turns into a lion, but Hitomi is able to beat him as she transforms into a honey badger, aka a ratel – the most aggressive animal in the world, and one that does not feel any fear when facing bigger foes. 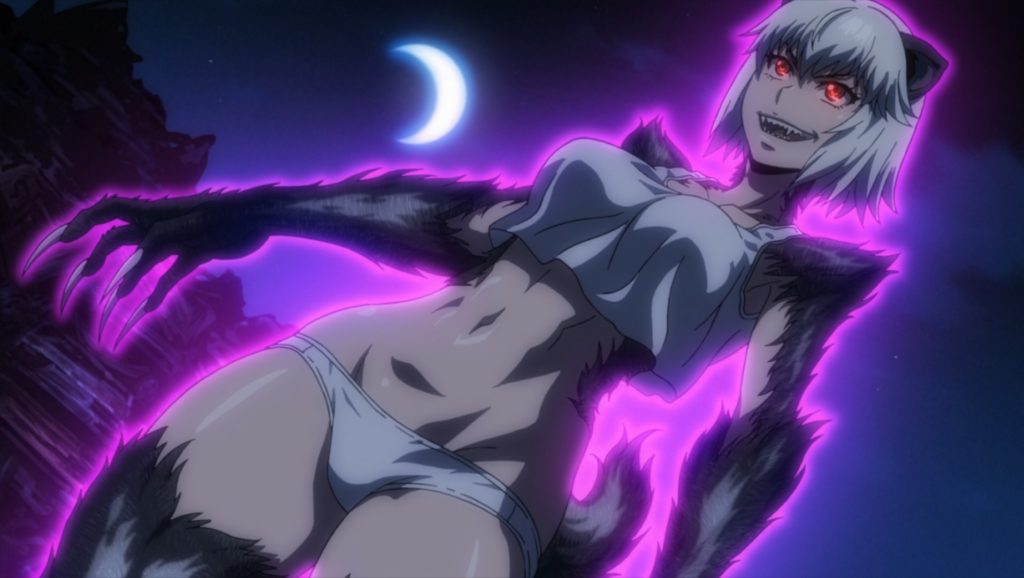 The following morning, Yuya finds that Hitomi has made herself at home in his flat. They are then visited by Shidou Reiichi, Hitomi’s legal guardian, who explains the situation. Hitomi is a “Therianthrope”, one of a race of people with the brains of humans and the fangs of beasts. She and other Therianthropes known as “Brutes” take part in a secret fighting competition called “Killing Bites”, which is controlled by four Zaibatsu – massive conglomerates that in reality were dissolved after the war, but in this world went underground, and now control several Brutes in these battles to the death.

Hitomi is ordered by Shidou to protect Yuya, which he needs as several other Brutes now try to attack him in order to find out any weaknesses Hitomi may have – including a female porcupine Brute who tries to grab his attention by flashing him in the street at night and then piercing his leg. Eventually, Hitomi is ordered to join one of the Zaibatsu on a temporary basis to take part in a “Destroyal”, a battle royale event in which each Zaibatsu sends a team of three Brutes to a remote island to fight it out until one team is left standing. They join the Ishida Zaibatsu, where they are teamed with Ichinosuke Okajima, a hippo Brute and Ui Inaba, a rabbit Brute who has not won a single fight. Eventually, the team are sent to the island, with Yuya on a nearby cruise ship acting as the captain moving his “pawns”, playing a life-or-death game against bloodthirsty multimillionaires. 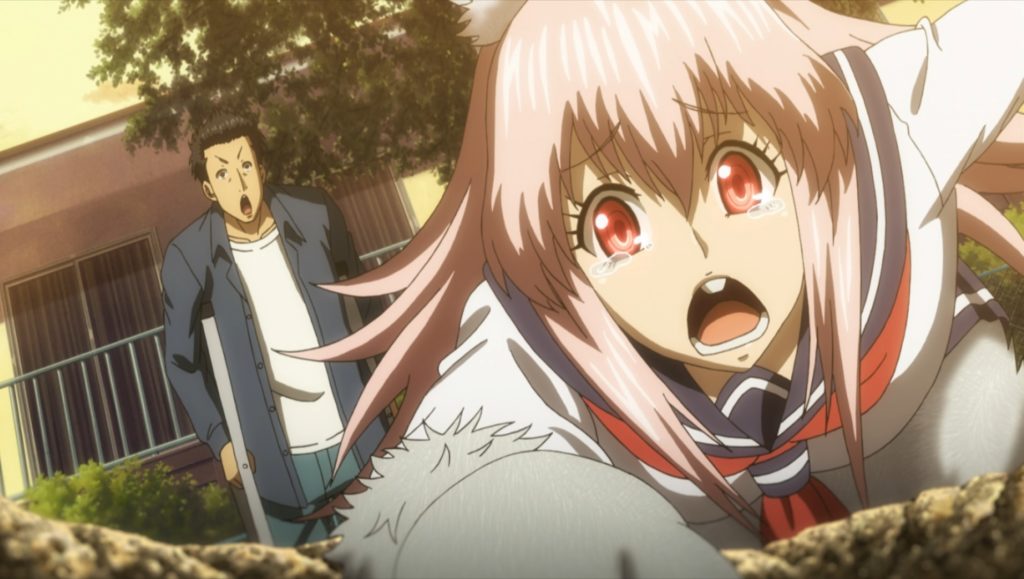 As mentioned, the fact that this series contains a rape scene at the very start will put off viewers, even though Hitomi emerges from it relatively unscathed. There is however another rape scene in the final episode which does finish much worse for the victim, and this is certainly something that will disgust many viewers. There are other problems with Killing Bites too: there is dodgy CGI, the soundtrack is unremarkable, there is no English-language dub, and the only extras are some Japanese promos, and textless opening and closing.

In terms of positives however, the actual fight scenes are engrossing. There is plenty of action to keep you entertained, and the wide variety of animal/human hybrids used does provide a diverse range of attacks. The ultimate fight of the Destroyal sees Hitomi face off against a Brute pangolin, whose scale armour provides a formidable defence against Hitomi’s ultraviolent slashing. Of course, we now know that it would be surprisingly easy for a pangolin to win, as it would just have to become the source of a virus that spreads around the world. This anime however, was made in 2018, so the creators would not be aware of the pangolin’s unseen danger.

Other competitors in the fight include a poisonous cobra Brute (yet another sex pest), a crocodile with deadly crushing claws, and a civet who is able to unleash a chemical that acts as an aphrodisiac and thus make the fighters want to stop beating each other up and start making love instead – although you get the feeling that this was added purely to get some lesbian fan service into the show. There is, not surprisingly, a fair amount of fan service in this series, though most of the time it tends not to get in the way of the action too much. 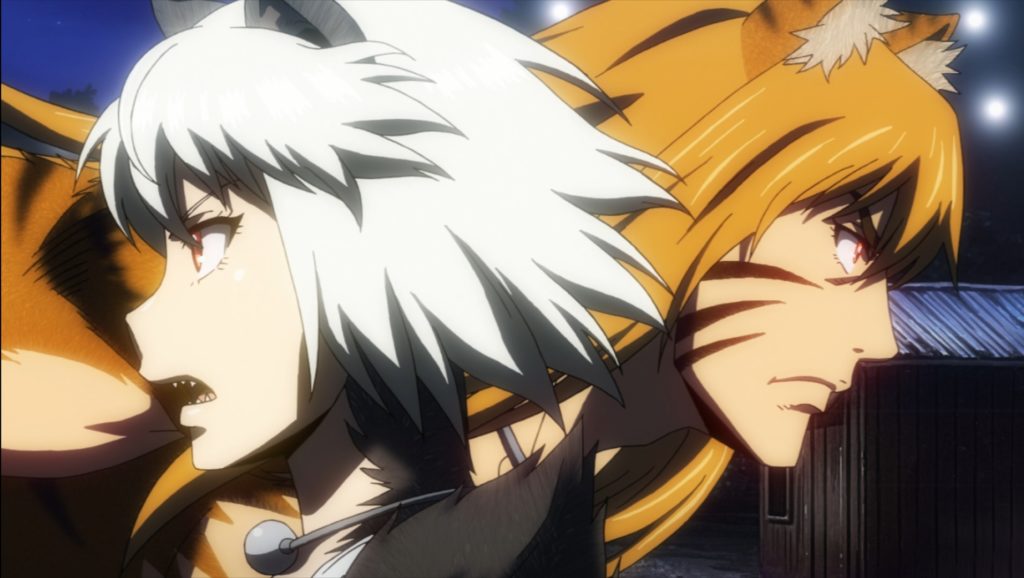 Weirdly however, perhaps the best part of the entire series are the extra scenes after each episode. Each episode ends with a comic short starring a minor character called Oshie Nodoguro, a classmate of Hitomi’s who doesn’t appear anywhere else in the show, whose behaviour is similar to that of the honeyguide, a bird which has a close relationship with the honey badger. However, Oshie is not a Therianthrope, and so her behaviour is constantly getting her into bother. This comedy character often feels like the best thing in the entire anime.

If you do decide to watch this series, one other positive I can refer to is the ending. It is one of the most surprising shock endings I have seen in an anime that I have reviewed for some time. Something I was not expecting at all.

This series does have much in it that is objectionable, and there are plenty of reasons not to watch it, but if you can stomach some of the more gratuitous moments then you might find some parts of it entertaining. 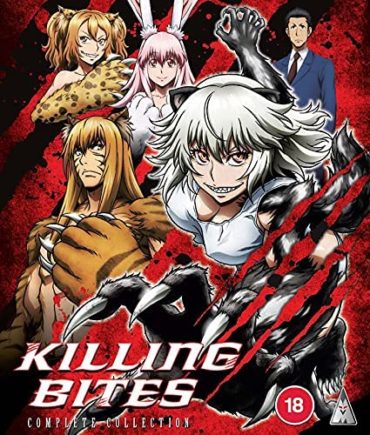