After shattering his pole-arm katana against the crystalline body of the Demon God Hellfire Tengu, Musashi is left visibly frustrated as the Takeda band of samurai steal what he believes was his kill. However, despite Musashi’s childish complaining in the face of the inevitable, Takeda captain Naotora sees the kid’s potential and ends up encouraging him by throwing him one of the kaleidoscopic crystals that enable humans to detect where the demons are lurking. Now filled with a renewed sense of purpose, Musashi and Kojiro start out on their adventure to rid The Land of the Setting Sun of the demons that have ruled the country for the last 150 years.

While the first volume of Orient focused on introducing its main characters amid some frantic action, this second volume is more about setting up the scene for the rest of the series, explaining more about the world and why there are futuristically styled samurai riding around on motorbikes slaying demons in the first place. While we have heard some of this before, it takes the time to dive into the picture scroll that used to belong to Kojiro’s father, revealing not only how to kill demons, but also that when the greatest samurai kills the greatest demon, they will be pronounced king in a ceremony known as the “Union under Heaven”.

It’s a rather simple and obvious goal, but one that works in the scope of a shonen series such as this. With over one hundred demons to destroy and scope for plenty of trials and tribulations along the way, there’s potential for this to become a strong, long-running series if Ohtaka can keep up the pace and deliver some strong action with plenty of variety in the design of the demons.

That is something that is rather missing from this volume, though, as being so heavily focused on exposition means that it rather plods along until it gets to the next major story arc, and even then, it feels like the brakes are still firmly applied as it has more stuff that it must explain before it can really get going.

That said, this does give it plenty of room for character development, with the first few chapters really digging into the fact that Musashi and Kojiro are just kids and don’t have much experience in the ways of the world. Musashi often comes off as a bit of a brat, throwing tantrums and constantly complaining, while leaving all the preparation for their epic quest to Kojiro. And even Kojiro vastly underestimates the outside world despite being the more mature one, as the pair quickly find themselves running out of both food and water.

It’s the introduction of Tsugumi, however, that really energises this volume. A very stylishly dressed teenage girl fighting for the Kosameda band of samurai, she initially attacks our heroes while they are fishing before stealing their bike and leading them to the Kosameda castle, where not everything is as harmonious as it seems. While some of Tsugumi’s actions feel a bit unnecessary (some applied seduction in the middle of the fight feels just like cheap fanservice) she has the potential to become a fun and strong character. She gets the opportunity to show off some flashy moves with her arm-mounted knives, while there’s a rather tragic backstory around her subservient reliance on her lord Hideo, whom she is struggling to overcome.

Hideo though is a tough man to resist, as he knows just how to charm people with simple words and smiles, something that even Musashi and Kojiro fall victim to. That friendly side of him though is all fake, as the series makes a good point in there being both good and bad samurai, contrasting him with Naotora as it reveals that in reality he doesn’t care about his people at all and would handily sacrifice them for the sake of a battle, as he prepares to mobilise the entire populace against an incoming horde of demons.

While it is still up to Musashi and Kojiro to save the day, I do get the sense that Tsugumi is being set up to be party member No. 3, and I honestly think she would make a great addition to the team, so here’s hoping she gets to join in on the action in the upcoming battle.

The artwork in this volume feels like a steady improvement over the first, as it starts to embrace some stronger character designs with the likes of Tsugumi and Hideo, while its main strength continues to be in the depiction of the world, with some striking desolate vistas that feel nothing like Japan and more like the southwestern United States and the Grand Canyon, and some strong work in the architecture of buildings such as the Kosameda castle.

Orient is being released by Kodansha, with the print volumes of this digital-first series being well presented, with a translation provided by Nate Kerr that continues to read well with no particular issues to speak of.

Overall, volume 2 of Orient is a step down from the first, being rather light on the action and is burdened by all the exposition required to move the story forward, heavily applying the brakes to its pacing. Thankfully, the introduction of a stylish new character in Tsugumi prevents this from becoming too much of a bore, with there being plenty of interesting character development as we begin the next arc of the story. At this point I think the series has all the elements it needs for success; it just needs to combine everything it has shown so far into a more consistent whole, something that it promises to do as it moves into Volume 3. 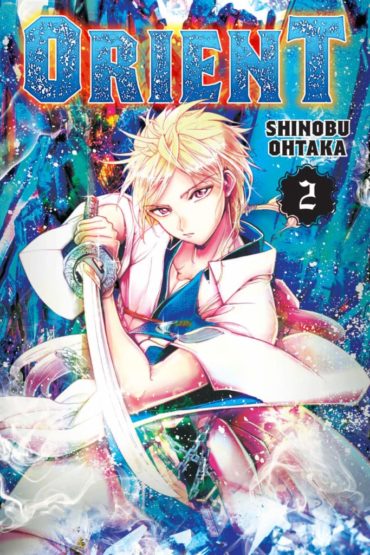