In Volume 5 of Orient, our heroes find themselves in a dire situation. Under attack from the samurai-slaying katana hunter Shiro Inukai, Kojiro and Tsugumi can do nothing but run with the rest of the gathered samurai, who risk not only losing the remains of the Blue Demon God but their lives as well. However, realising that racing down the mountain would put the defenceless people in the town below in danger, Kojiro decides to make a stand, although Shiro is far too powerful and defeats him easily. Thankfully, Musashi turns up just in the nick of time to save his friends. Facing off against Shiro and his slithery companion Nanao, can Musashi unlock the power of the Obsidian Goddess sleeping within, or will they fall under Shiro’s immense power?

While we aren’t operating on the same scale as the Demon God that we saw in the first volume here, Volume 5 feels like the series has finally arrived at what we’ve been waiting for, filled with high-stakes action that sees our heroes pushed to their limits. As I mentioned in my review for Volume 4, Shiro is an absolute monster, and the scale and power of his abilities demonstrated here just continue to drill that in as he smashes his giant sword around and literally flips the world upside down. We’ve been learning in this arc that demon metal blades allow the wielder to use magical superpowers and attacks, with Shiro’s seemingly being to manipulate earth, space, and gravity. That combination gives him a lot of flexibility in combat, making him even more terrifying when you know he can just pull the ground out from underneath you.

He still tends to rely on blunt force though, which makes Nanao a good companion, thanks to her skilled swordplay with her unique demon metal blade, a deadly-looking seven-section staff. While it was alluded to in the previous volume, each demon metal blade houses a spirit that gives the blade its power, which explains their magical properties and is what allows Nanao’s staff to become a deadly weapon with seven energy blades. It’s just a small detail, but it is important to note how these weapons work, as the spirits themselves do have a part to play in the overall story, which is nice that they’re not just a quick explanation for the blade powers. Overall though, I just think the weapons look really cool, and the different powers give you a visual emphasis to latch onto, similar to the visual effects for the sword moves in Demon Slayer: Kimetsu no Yaiba.

Nanao herself though is still the weaker of the pair of villains, as while she looks quite threatening at first, our heroes start opening holes in her offensive with some great teamwork and strategy. Where earlier volumes often had them act separately, it’s nice to see the trio really working as a team here as they all fit into specific roles. While this volume is really Musashi’s big hurrah, Kojiro puts up a good fight and Tsugumi pulls off a good assist too, even though she’s very much the comic relief character here (something she pulls off well with some excellent quips and great faces!). While there’s still more the series could do with them in terms of character building, I certainly feel more at home with them now, five volumes in, and they’re not the bland faces they were when they were first introduced, certainly in Musashi’s case.

This arc, after all, has been about putting him forward as the protagonist and in this volume, he (kind of) gets to shine. I say kind of as it’s mostly the Obsidian Goddess’ powers that save the day, but it’s Musashi’s belief in his friends that finally unlocks her power. The Goddess herself is actually really cool and a lot less haughty than she seemed in the previous volume. That said, it does feel like a bit too quick of a personality switch, which might be down to Ohtaka not having down all the finer details of her character, but even then, I can only offer praise for the detailed mythology and world building that Ohtaka masterfully weaves in amidst the action set pieces.

As the mysteries are peeled back, everything about the Goddess and where she fits in the story starts to make a lot of sense, but it’s careful enough not to reveal everything, as it knows it must keep certain things close to is chest to keep the story going. There seems to be some stuff going on around Kojiro’s father, who is more deeply tied to our character’s fates than we first thought which is interesting, while Shiro and Nanao seem like they’ll be popping up later as recurring villains too.

As such, I feel pretty good about its current direction as it brings this arc to a close. There’s still plenty left to discover but it finally feels like we’re at the kick-off point for the real journey, it’s just a shame that it’s taken five volumes to get there with the laborious pacing of the earlier part of the story. Now knowing where it goes, I’m looking forward to seeing how the anime adaptation tackles it, as there’s some stuff in here that will look really cool if they can fix up the pacing.

Orient continues to be published by Kodansha in its digital-first format, with these print releases slowly catching up with the digital release. Translation duties for this volume have been handled by both Nate Derr and Kevin Gifford and it reads perfectly well with no issues to speak of.

In terms of art, this volume is consistent with the rest of the series and still struggles in conveying everything that is going on within the confines of a busy panel, yet I think in some cases where the action is pretty chaotic anyway it kind of works. Again, I expect this to be something that the anime adaptation can iron out as this is a series that has always felt that it was designed with an anime in mind.

Overall, the fifth volume of Orient is highly entertaining with plenty of high-stakes action, offering a satisfying conclusion to the current arc of the story that ends cleanly and wraps up the current ongoing plot threads, but also gives you enough glimpses into the future to make you want to read on and see where our heroes end up next. 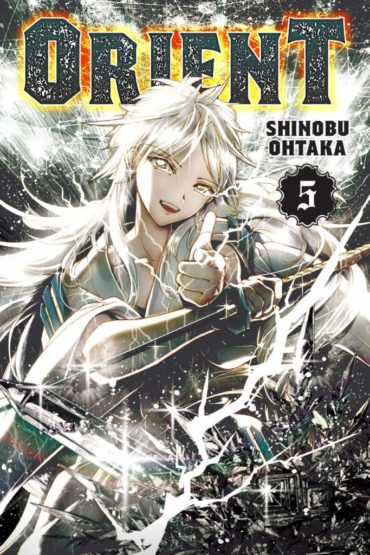