After its breakout first volume, Shinobu Ohtaka’s Orient has been a bit hit-and-miss, with it being unable to really match its initial highs and struggling with its pacing in particular. Thankfully, Volume 4 feels like it is starting to pick things up as it delves more into the world’s mythology and gives us an interesting antagonist for our fledgling band of heroes to fight against.

We pick up where Volume 3 left off, as Musashi and Kojiro take the blade test to secure their demon metal blades so they can fight against the Blue Demon God. While Kojiro quickly acquires his blade, Musashi isn’t so lucky as he is rejected by the blade he wants. We’re quickly informed that each person’s soul has a colour, and while Kojiro’s is a common blue, Musashi’s is the ultra-rare black, which means he is incompatible with demon metal and will never be able to wield a blade.

While Musashi is still in shock, the Blue Demon God attacks, dividing our heroes. Kojiro and Tsugumi race up the mountain with the other samurai to take it on, while Musashi stays in town, hoping he’ll figure out some way of gaining a demon metal blade, as he has managed to use one before. By a stroke of luck, the samurai he met back then – who also seems to have the same affliction as Musashi – reappears. Musashi’s initial trust in this samurai, known as Shiro Inukai, is misplaced however, as he is tricked into falling down a bottomless pit. Shiro, you see, is a katana hunter, someone who steals other samurais’  demon metal blades after ruthlessly cutting them down, and he has his sights set on Musashi as not only can he be turned into black crystal (a raw material that goes into making demon metal blades) thanks to his black soul, but he also harbours a being called the Obsidian Goddess, which Shiro and his assistant Nanao Inusaka would very much like to get their hands on.

This volume is the kick that the series needed, as it brings us back into the thick of the action that has really been missing the past couple of volumes, while also doubling down on the world building that Ohtaka does so well as it delves more into the world’s mythology.

It’s definitely the latter that got me hooked into this volume, as everything that is going on with Musashi here is fascinating and presents us with a lot of mysteries to solve. You’ve not only got the mysterious black crystals that grow out of him, but the Obsidian Goddess that’s sleeping inside of him as well, and it does a good job of making you think of the important questions, like “Who is she?” and “How did she end up inside Musashi?”. These aren’t answered here, but it’s obvious that she’s going to be important later down the line and, knowing the way shonen manga usually go, I fully expect Musashi to be able to use some mysterious power that makes him the strongest samurai ever. So, while he’s currently in a bad place, this certainly isn’t the end of his adventure.

We also get Musashi’s full backstory (which was missing until now) which helps us understand his character and where he fits in with the rest of the band. It’s certainly odd that this wasn’t really touched on before, as we know basically everything there is to know about Kojiro and Tsugumi, but it does fit in nicely here as it tries to explain why Musashi has a black soul.

The re-introduction of Shiro and Nanao here also gives us a more meaningful antagonist than the Demon Gods, who are essentially just a load of monsters despite how cool and fearsome they look. There’s been a point so far of some of the human characters being a lot worse than the demons, and these two continue this trend, as despite his cute and childish face, Shiro is an evil and manipulative monster who’ll do anything to get what he wants. The scary thing is that he has the power to achieve this, as we see him slaughter a whole band of samurai in a heartbeat. You don’t get the same feeling from Nanao though, as she comes off the weaker of the pair and is just there to rein Shiro in when he gets too crazy.

And it’s not just Shiro that we see going ham, as Kojiro gets a good slice of the action when he uses his new demon metal blade to fight off the cow demons that the Blue Demon God dumps on the town. What I really like about the demon metal blades is that they aren’t just physical weapons but exhibit mystical powers that allow them to be used in a lot of different ways. For example: Kojiro’s blade sends out multiple deadly beams that shoot through enemies. There’s plenty of scope to be creative with the blade attacks, which offer a lot up to the action scenes and make them much more dynamic compared to just slicing something with a sword.

The downside is that the artwork can get very busy while all this is kicking off, which makes things a little confusing to follow, like my eyes didn’t really know where to look. That said, it’s all still solidly drawn, and I got a laugh out of the demons being designed like some kind of mutant cows.

Orient continues to be published by Kodansha in its digital-first format, with these print releases slowly catching up with the digital release. Translation duties for this volume have been handled by both Nate Derr and Kevin Gifford and it reads perfectly well with no issues to speak of.

Overall, Volume 4 of Orient is a marked improvement over the last couple of volumes, as it picks up on the action, gives us a threatening antagonist, and delves further into the world’s mythology. It’s still not quite on the level of the opening volume, but this is definitely a step in the right direction and I’m looking forward to seeing where it takes some of the new elements introduced here. 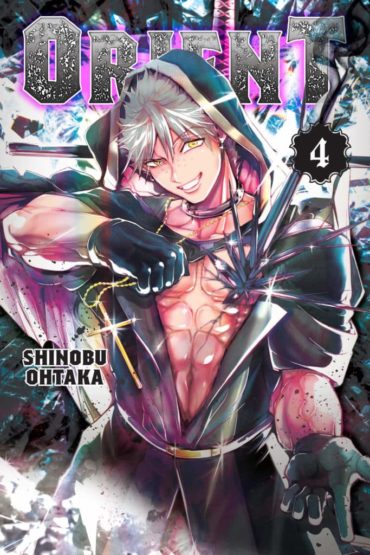