So far, Shinobu Ohtaka’s Orient has set out all the elements it needs to guarantee its success: great artwork, an interesting overarching plotline, a set of characters with plenty to build on, and some scary demons with some fantastic designs. However, it has struggled to bring them all together into one cohesive whole and, unfortunately, that doesn’t really change in this third volume which is firmly divided into two halves: one that delivers a solid conclusion to the current arc of the story, and one that struggles to get going into the next.

After the set-up at the end of Volume 2, this volume resumes in a surprising direction as it rather sidelines Musashi and Kojiro and turns its focus on Tsugumi, as she finally plucks up the courage to defy her “master” and leader Hideo, as he gives the general mobilisation order for the townsfolk of the Kosameda castle to stand against the oncoming demon horde. With all of them facing either dying at their lord’s hand or being killed by the demons, the townsfolk are stuck in a particularly terrifying situation, and it’s now up to Musashi, Kojiro and Tsugumi to save them and beat some sense into the samurai band’s poor excuse for a leader.

While on the one hand it’s a little disappointing that they don’t really get to fight any demons here, leaving very little for Musashi and Kojiro to do, I still ended up quite liking the direction that it ended up taking as it provides some strong action and character development for Tsugumi, who is quickly becoming one of my favourite characters in the series. While a lot of other shonen action titles tend to reduce their main female characters into the token fanservice girl, Orient holds up rather well by making Tsugumi a multi-faceted character who can really carry herself with both a delicate heart and a fiery soul. While she has a lot of self-esteem issues that aren’t going to be solved overnight, she’s come on leaps and bounds since she was first introduced and it’s great to see her move forward by taking a stand here.

She’s also served well by some good-looking action scenes that show off her fighting style to the fullest, as she proves to be a very tenacious and agile fighter. While she can’t match Hideo in terms of overall power, it’s good to see that no matter how many times she gets beaten down, she’ll always get back up again to have another go. I do think it could be showing off the powers of the demon metal blades a bit better however, as when Hideo cracks out his bow, all we see is random beams of light appearing from out of nowhere and it makes things a little confusing.

That said, the rest of the artwork is pretty great, although it can feel a little busy at times when it tries to cram a lot into a panel. Even then it can still work really well, as I was particularly fond of some of the imagery and concepts used for the raging horde of demons being presented as a massive tsunami that makes good use of the real-world concept of religions and folklore presenting forces of nature as horrific monsters. The second half also gets to revel in its intricately detailed design work, not only touching characters and buildings, but the demon metal blades that become the focus for the next part of the story.

As it transitions away from the Kosameda arc it does spin its wheels a bit, inserting a rather nonsensical chapter that threatens to throw away some of the good work with Tsugumi’s character as she bares her breasts in order to “make friends” with our leading duo. It’s a bit of light comic relief, but I found myself sighing at the attempt to go for the low-hanging fruit when it could have just gone straight into the following chapter, where a rogue demon steals Kojiro’s katana. There are some interesting details mixed in here on how the demon metal blades work, while we get introduced to the cover character of Volume 4, but ultimately a lot of this second half of the volume could have done with a lot of tightening up, as it all ends up being repeated later as the gang arrive at the Great East Mine where the next demon lord is predicated to appear.

Here we finally get back to our lead protagonists, which is very welcome as the focus on Tsugumi has left them feeling rather underserved and weak in comparison. Thankfully, as we lead into the next volume, that looks set to change, as Musashi gets to replace his pickaxe from the first volume with a demon metal weapon that he can actually kill demons with, which of course is the entire point of the series, and something that it has oddly forgotten about in the last volume and a half.

Orient continues to be published by Kodansha in its digital-first format, with these print releases slowly catching up with the digital release. Kevin Gifford takes over translation duties for this volume, which remain good and consistent with Nate Derr’s work on the first two volumes. There do seem to be some layout issues with some of the text being positioned right at the top of the page, although apart from one word being cut in half, it doesn’t have a major impact on the reading experience.

Overall, Orient still feels like it is waiting for the follow-up to its breakout first volume. While Volume 3 does a good job of building up Tsugumi and allows her to take a lead in the action, the sidelining of the main protagonists and its poor pacing really drag it down. It’s probably still worth taking a wait-and-see approach as it moves into its fourth volume, but it needs something to energise the story and its leading duo going forward. It does keep promising more interesting things, but it’s going to get harder and harder to get by on just the strength of its artwork alone, and I fear that if things don’t change soon, it’ll have a lot of readers dropping off. 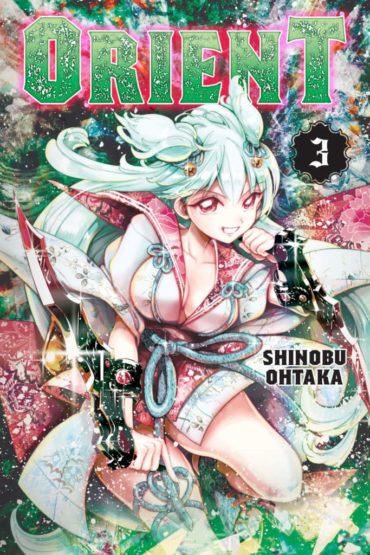