In Volume 8 of Sweat and Soap, things were looking positive for Kotaro and Asako as the two celebrated their first anniversary together and enjoyed a company trip. However, now Volume 9 is here and Asako is in tears on the cover so it seems like this instalment of the series is potentially headed down a sad path! Let’s find out more.

This book opens with Asako and Kotaro attending a summer festival together and then moves into a storyline about her catching a cold and Kotaro attempting to take care of her during the second chapter. These are a good way to start since they capture some of the things we love most about the series, which is the relationship between our two main characters.

After these chapters, we move into the story arc that this volume is centred around. Asako takes an overnight trip back to her parents’ house, as an opportunity to meet up with an old friend from junior high has come up. Asako’s friend Mitsuki is in a very different place in her life compared to our protagonist, she’s been married (although now separated) and has a two-year-old daughter.

Naturally, as part of their catch-up, the girls talk about their love lives and Mitsuki comments that she was surprised to hear Asako has moved in with someone, given how she kept herself closed off from everyone back in school. Mitsuki also talks about how her marriage fell apart due to her being unable to give her partner the time and affection he needed after their daughter was born, which certainly gives Asako plenty to think about, should she and Kotaro get married and then have kids of their own.

If that wasn’t enough, Asako runs into a classmate (who goes unnamed) from grade school, one who called Asako “Astinko” and used to bully her about how much she sweated. Given she uses the nickname on this greeting, Mitsuki asks about it and the classmate explains the origins and that Asako hasn’t changed even now and still seems to sweat a lot.

This encounter understandably upsets Asako, not just because it’s dredging up bad memories from her childhood but also because someone commenting on her body right now is a blow to her confidence. Since she started dating Kotaro, Asako’s grown more comfortable in her own skin and doesn’t worry as much about how other people see her. Sure, she still gets anxious at times but the reassurance from those she cares about has gone a long way in making her forget about the pains of her childhood.

Asako can’t forget about what her classmate said and even after returning home to Kotaro, she can’t bring herself to tell him about what happened. But it’s weighing on her mind, all the same, so she finds herself spiralling mentally and pushing away her partner telling him she needs some time, despite the fact he’s the one person who could help her.

For his part, Kotaro doesn’t know what to do. He doesn’t want to push her but he also worries that their relationship is going to fall apart like this, which is heartbreaking considering he was once again contemplating marriage just before this happened. But although he may not approach Asako as to what’s on her mind, I like how author Kintetsu Yamada shows us things from his perspective, especially how he can sense Asako’s sadness (from smelling her scent) and that he asks her boss and friend for advice about what to do. Kotaro is always portrayed as being incredibly caring and impulsive but when it matters, he takes small steps to work out what to do which is realistic given the relationship these two have.

For some readers, it might seem surprising that this was enough to throw Asako off but I want to praise Yamada for how realistic and grounded this storyline is. It’s not unreasonable that someone would spiral when a deeply rooted anxiety is brought to the surface, nor that they’d think it was silly and not want to talk about it with those they love. I’ve been in that position before and Yamada portrays it perfectly through Asako. The author does such a good job with it that I spent the second half of this book close to or in tears as Asako fought with her demons, simply because her feelings were expressed in such detail through the artwork and dialogue. Honestly, these chapters are heartbreaking, but that’s a good thing in this context since it’s clearly getting through to me as a reader. I often praise Sweat and Soap for being relatable and realistic and this instalment is yet another tick in those checkboxes.

Sweat and Soap Volume 9 comes to the West thanks to Kodansha and continues to be translated by Matt Treyvaud. As usual, the translation reads well with no issues to note. Volume 10 is already available with Volume 11 following later this month, which will bring the series to its conclusion.

Overall, Sweat and Soap Volume 9 is easily one of the most emotional entries in the series so far. I’ve often said that this manga excels at being realistic and grounded, but of all the books so far, this is the one to perfectly capture that feeling. Make sure you have some tissues at the ready! 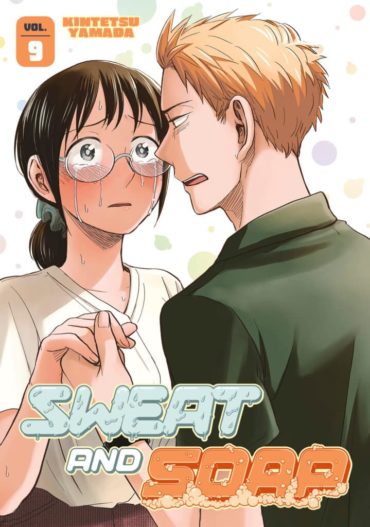