Volume 9 of Sweat and Soap saw Asako reunited with a childhood bully, which led her down a path of depression and heartache as she shut herself off from her friends and family. After two weeks, Kotaro can’t bear to leave his girlfriend alone any longer and finally confronts her, but will he be able to help her? Let’s find out in Volume 10 of the series.

Up until now, Kotaro had been leaving Asako to her own devices, giving her space in the hopes that she would open up to him when she was ready. However, two weeks have gone by and with no signs of that happening, Kotaro felt he was left with no choice but to force the conversation and find out what’s been going on with her. In tears, Asako finally tells Kotaro about meeting the woman who bullied her and about what happened in her childhood.

In an emotionally charged chapter, Kotaro reassures Asako by telling her that while he can’t change her past (and he sure wishes he could!) he always wants to share in her pain and never wants her to suffer in silence. With her bottled-up feelings out of her system, Asako begins to feel a lot better and the next day she asks Kotaro if there is anything he’s been struggling with.

Of course, we readers know that the one thing Kotaro has been struggling with is his desire to marry Asako. He’s been holding off asking since he doesn’t want to make Asako uncomfortable, but after this incident, his feelings for wanting to spend the rest of his life with her are all the stronger. Rather than continue to keep quiet about it, Kotaro finally reveals that he wants to get married – to which Asako readily agrees!

With the two fully prepared to move to the next stage in their relationship they begin wedding planning  which brings many problems of its own. From arranging wedding rings to the type of ceremony and Asako’s dress – there’s a lot to think about. On top of that, the two also choose to hold a family dinner between their two families, so they can get to know one another ahead of the wedding.

The nice thing about this part of the story is that the focus switches briefly to Keita, Asako’s younger brother. Keita has always been incredibly protective of his sister because of seeing her bullied at school and while he’s happy to see her relationship with Kotaro going so well, he finds himself feeling uncomfortable and out of place meeting Kotaro’s family.

The idea that these people who used to be total strangers are going to be part of the family is a lot for Keita to take in. Thanks to some encouragement from Asako, he begins to come around to the idea that he doesn’t have to be instantly close to them, he just has to be open to the idea of becoming closer over time, which allows him to relax and enjoy the meal. I like this chapter, since we’ve already been through the anxiety and worries of Kotaro and Asako meeting their respective partner’s families, so seeing it through the eyes of Keita is a refreshing perspective. I also appreciate the fact that Keita’s still getting character development even now, given we haven’t seen him for several volumes and he’s always been an interesting member of the cast.

With only a single volume left, it’s nice to see Sweat and Soap headed for a happy ending. The heavy emotional storyline from Volume 9 was important for building up the strength of Asako and Kotaro’s relationship, but as someone deeply invested in their story, I’m overjoyed to see them so happy again. This final storyline about preparing for their wedding is interesting while also acting as a satisfying stopping point for the series, so as sad as I’ll be to let it go I think I’ll at least be prepared to say goodbye to these characters and that’s all you can ask for.

Sweat and Soap Volume 9 comes to the West thanks to Kodansha and continues to be translated by Matt Treyvaud. The translation reads well with no issues and there are some helpful notes at the back of the book to explain some of the traditions and customs related to Japanese weddings. Also in Sweat and Soap news, a Japanese TV drama has just begun airing! Worth keeping an eye on Viki to see if it gets licensed since a lot of drama adaptations of manga have been going on the service as of late.

Overall, Sweat and Soap Volume 10 offers a satisfying conclusion to the emotional storyline that began in Volume 9. Now we’re on the way to the whole series coming to an end, which is sad but sure to be a lot of fun if this book is anything to go by! 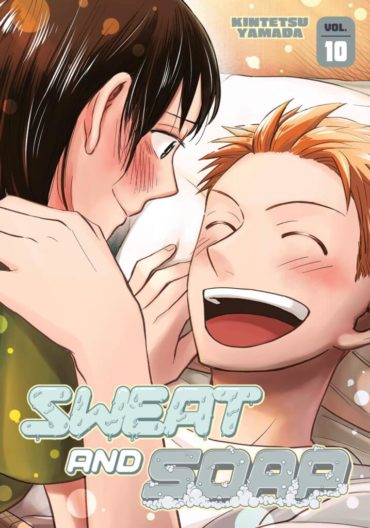