Volume 6 of Sweat and Soap saw Asako and Kotaro finally move in together, as well as showcasing the problems that can arise from living in the same space. Tensions mounted until Asako finally blew up at Kotaro about his actions and, after a long discussion, things seemed to be on the mend between the two. Now, what does Volume 7 have in store? Let’s find out!

Volume 7 begins the morning after Asako and Kotaro’s big discussion on sharing the load and not tiptoeing around each other. Kotaro also realises that they’ve made it to their first Golden Week together, which means plenty of time to chill out but for Asako that raises the question of what does it mean to ‘chill’?

This leads Asako to realise that since she moved in with Kotaro, she’s felt as if she was intruding in their own home, so when Kotaro tells her relaxing over Golden Week doesn’t mean she needs to do anything in particular, she finally realises how silly her feelings have been up until now. Instead of standing on ceremony, she can do whatever she wants, including lounging around watching TV as she used to at her place.

After Golden Week, the rest of this volume is dedicated to Asako finally meeting Kotaro’s family. Asako has been eager to introduce herself for a while now, especially since Kotaro has already met her own family. However, meeting the parents of your boyfriend is anything but easy when you’re anxious about what they’ll think of you and if they’ll oppose your relationship because of a bad first impression.

Kotaro is not at all worried about Asako meeting his family, especially given how well she responded to the news that his mother is blind earlier in their relationship. Usually, whenever Kotaro revealed this fact to a girlfriend, they’d worry about ending up looking after Kotaro’s mother later in the relationship and proceed to break up with him. However, Asako took the news in her stride and has never once worried about it. Kotaro simply wishes that his girlfriend had more confidence in herself since he knows his parents and little sister are going to love her!

As is often the case, this instalment of Sweat and Soap takes a realistic approach to its subject matter. Meeting your partner’s family is a nerve-wracking affair and I’m glad the author Kintetsu Yamada didn’t shy away from that. Throughout this series, we’ve seen Asako’s low self-confidence plague her with self-doubts and for as much as Kotaro reassures her, sometimes you need to tackle these problems on your own to make any progress. That’s more or less how things go here, with Asako not being comforted by Kotaro and managing to gain more confidence as the trip goes on and she spends more time with his family instead.

Ultimately Asako is growing more confident and comfortable in her relationship the longer it goes on and that’s a very natural thing that I’m happy to see the series repeatedly touch on. Anxieties of any kind are not simply fixed overnight and Yamada does a great job of showcasing that in a relatable and honest way. Too many romance manga would turn some of these storylines into melodrama or resolve any intrusive thoughts in a couple of chapters but Sweat and Soap always takes a better approach which is what sets it apart in the genre.

Volume 7 of Sweat and Soap comes to the West thanks to Kodansha and continues to be translated by Matt Treyvaud. The translation reads well with no issues to note and there are some great translation notes at the back of the volume explaining things like Golden Week if you’re unfamiliar with it. Volume 8 of the series is available now with Volume 9 being released in September.

Overall, Sweat and Soap continues to delight with Volume 7. We’ve now finally gotten to meet Kotaro’s family and watch our cast build their life together step by step in a relatable and enjoyable fashion. 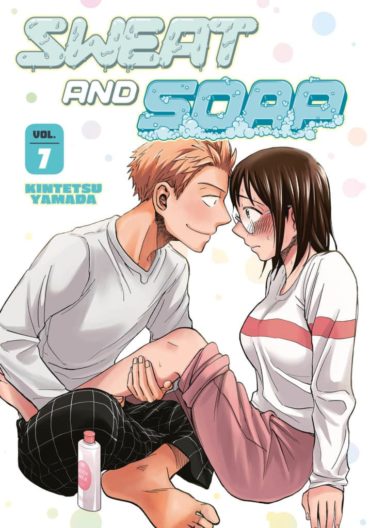