Ko is a human, Nazuna is a vampire, together they meet up every night to hang out, play video games and eat food (with Ko being the main course). But one night Ko is ambushed by a group of female vampires, who give him a choice: choose one of them to turn him or die. Despite him really wanting to become a vampire, he wishes for Nazuna to do it, but the girls share a crucial detail that Nazuna conveniently left out…there’s a time limit for when a human can become a vampire! But is it long enough for Ko to fall in love with Nazuna, or is it a ticking clock to his death?

The first two volumes of Call of the Night have kept the series in a tight focus, circulating just around Ko and Nazuna, with little information about the life of vampires and how they integrate with the human population. So, the third book rips open the small world they’re in and gives the audience a blast of new information. We get a flood of lore from how vampires interact with humans and more about this world’s rules on what vampires are, including a small but great example of ‘show don’t tell’ when it comes to how vampires survive in battle and whether they have healing abilities. The new vampires we meet, so far, are all female and make fabulous introductions. They’re not only distinctly designed but also make their mark with their unique pick-up lines (or in this case, tactics for capturing their prey). Their dialogue is snappy, and perfectly gets across that all these girls have known each other for a long time, so hopefully we’ll get to see more of them as the series progresses. We also get a glimpse of Nazuna’s place in their dynamic; Nazuna is the aloof, cool, isolated vampire, a trope that is very popular with human audiences, so the fact that she’s not popular with, or even liked by, the vampire gang we meet, allows for some good comedy. This is explored further in the third story leading off this volume with one of the newly introduced vampires, Seri, and how she on the surface seems to be playing the role of a typical vampire, but Ko finds out that there’s more to her than meets the eye. I won’t spoil what, but the interactions are interesting to watch unfold, even when the small hints of victim-blaming muddy the waters of what the series is trying to get across.

The second story of the volume involves a new character, Mahiru Seki who, like Ko, is having a secret life, involving a female, at night-time. It’s heavily hinted at his companion being a vampire, but the difference is that he has a healthy (well, at least healthier) daytime life than Ko does. Mahiru is popular, sociable and upbeat; his story is currently being played on the outskirts but seeing Ko interact with more characters from his ‘old’ life, as well as seeing them bleed into his new life is an interesting idea, hopefully to come into play more later on.

Junko Goda continues her lovely translation here; there are no notes but I can imagine that the various ‘pick up lines’ the vampires have must have been tricky to get across in English, so well done for that! Kotoyama’s art also continues to shine; this volume introduces some minor combat and action, but all of it is very clear to follow.

Each new offering of Call of the Night is a pleasure to take a bite into; from the interesting characters to the evolving story, this vampire series continues to be a fang above the rest. Recommended. 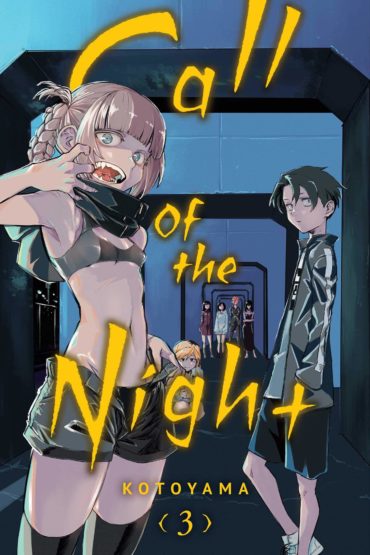 Call of the Night Volume 2 Review

The first volume of this supernatural coming-of-age comedy twisted many expectations, but how does the second volume hold up?

Call of the Night Volume 1 Review

An interesting take on vampire romance, without the stereotypical ‘brooding’ vampire in it? The first volume of Call of the Night is full of promise.