Ko, the 14-year suffering from insomnia, and Nazuna, the vampire who loves to suck his blood, have shared their first kiss. That must mean that they’re in love and Ko can become a vampire now, right? As it turns out, relationships are a lot more complicated than that. But as Ko starts to see Nazuna in a different way; he discovers more about the nightlife that lies outside of vampires and regular drunks. Why do other people choose to wander around in the middle of the night? And will Ko become just like them as he reaches adulthood, or will he find a way back to the daytime?

The first volume of this supernatural coming-of-age comedy twisted many expectations; from the vampire not being your typical dark and broody anti-hero, and the human love interest not being an female teen who’s ‘not like the others’, and the second volume continues to surprise the audience in new ways. In the latter half of Volume 1, we were introduced to Akira, a childhood friend of Ko’s who’s concerned that Ko has not only stopped coming to school but fallen into a bad crowd (a.k.a. vampires). You expect for her to play the role of the second love interest, the one wanting to push Ko into leaving the night life and returning to normality, and whilst she does share her concerns for Ko’s new friend, she also has more going on with her character. Akira makes it clear to Ko that, whilst she doesn’t agree with what he’s doing, she can also see that Ko is happy. Instead, she extends an olive branch – to remain friends no matter what happens – which is very touching and also shows she’s dealing with her own emotional issues by running into the night, even if she remains unaware of it. There’s a fun scene in this book where the three of the them are playing video games; with natural friendly banter between them, a funny gag where Nazuna offers a ‘kiss’ to the winner which Ko takes in his stride but Akira is clearly embarrassed by. Add in some funny puns thrown in for good measure and it’s a great scene that perfectly establishes their dynamic.

Another way the series plays with expectations is with Nazuna. There’s one chapter where it’s exclusively from her point of view (the first one so far) and you would expect to see the true life of a vampire: seducing people into giving her blood, meeting other vampires, the dark underbelly of the night, etc. Instead we get her taking a bath, complaining about her post not being delivered, petting a stray cat… just normal stuff! The book also leans a lot more heavily into vampire being a metaphor for sex and prostitution, so having Nazuna continue to not only have a healthy (blood) drive but also have it be a part of everyday life is refreshing. However, the series never lets the audience forget what she actually is; there are many scenes where she and Ko are being sweet, intimate, that suddenly turn flirtatious and dangerous when Nazuna goes in for the bite, with seductive close-ups to frame the twist in mood. Despite their good chemistry and potential for lifelong friendship, at the moment their power dynamics are still very unbalanced, but it all plays into the story very well, carefully framing Ko’s journey as he moves further away from the light and into the darkness.

Speaking of Ko, he’s still the main point of view, and his character arc for this book is his growing feelings towards Nazuna, and as he’s a 14-year-old boy, it’s clear that his inner turmoil and increase in having ‘inappropriate thoughts’ is part of his journey through puberty. This may raise a few alarm bells as normally this subject isn’t always handled well, especially when it involves a more sexually provocative woman, but he’s just on the cusp of starting it; he’s not even sure of himself and how deep his feeling go and, given his age, it’s an uncomfortable time that everyone must go through. Like the nightlife itself, as the story unfolds, he’s discovering more about himself and who he is as a person, with the last chapter of the book hinting at a new ‘arc’ of sorts where he’ll be meeting new people each night. His first encounter is with Shirakawa, a young woman who is overworked and struggling with her work/life balance. It’s nice to see a series come down so harshly on the unhealthy office environment that Japan is infamous for, and even though Ko’s words of advice are on the naïve side, it does provide her with some clarity and hope at least, which is a step in the right direction.

Translation continues to be provided by Junko Goda; there are no translation notes but I love how she maintains Nazuna’s unique tone of voice and balances Ko’s growing pains in his dialogue very well.

Call of the Night continues to be a fang-tastic series, although there’s no set ongoing story for now, the journey with these characters is, so far, very entertaining and well written. Definitely check it out if you haven’t already. 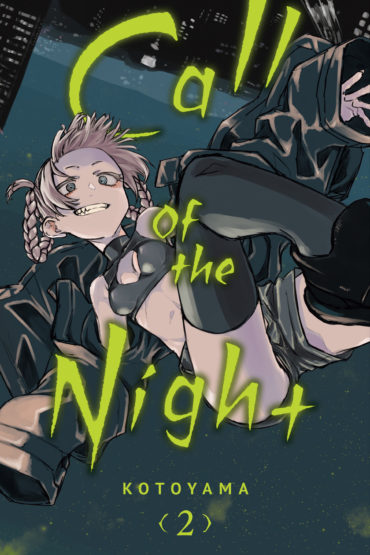