Despite a strong start back in Volume 1, I Belong to the Baddest Girl at School has been on a downward slope ever since. With the introduction of a new character in Volume 4, the author is trying to shake things up a bit, but does it pay off? Let’s find out!

Here in Volume 4, we meet transfer student Yodo, a girl our protagonist Unoki knows all too well from his elementary and middle school days when she did nothing but bully him. Unfortunately for Unoki, Yodo hasn’t changed at all in the time they’ve been apart and she quickly slips back into the status quo of picking on him and making an enemy of Toramaru by declaring she has feelings for Unoki.

Yodo even goes so far as to threaten Unoki into not talking about her bullying or she’ll make sure Toramaru and her friends will get in trouble with the school. Because of this, Unoki promises to keep quiet, provided Yodo keeps her hands off Toramaru, which she agrees to and leads to Unoki being the sole target of her bullying for the remainder of the volume.

Meanwhile, Toramaru doesn’t understand why Unoki is putting so much distance between them and things only get worse when her brother Tasuku gets excited about Toramaru having a rival in love. Even Yutaka and Matsuri keep their distance from the situation for most of the volume, which means Toramaru has no real support for how to handle all this. When Toramaru later learns of Unoki’s deal with Yodo, she’s thrown even further into turmoil…

I’m going to say upfront that I absolutely hated this volume to the point of being done with the entire series. I was hoping the introduction of a new character would refresh things, but Yodo is a terrible addition. There is certainly a world in which you could bring in Unoki’s old bully and deal with it seriously, but author Ui Kashima doesn’t handle it particularly well.

It doesn’t help that a lot of what Yodo is doing gets presented in a comedic light, but it shouldn’t be. She’s putting tacks in his shoes, vandalising his desk, threatening him and by the end of the book she even kidnaps and ties him up! Yodo has a rotten personality but none of the characters besides Unoki and Toramaru recognise and will do anything about it. There’s even a section where Tasuku comes to their school and sees first-hand how Yodo is treating Unoki, but he doesn’t do anything either!

I don’t think I’d mind as much if the author had decided to stick to this being a comedy arc or a serious arc, but the artwork and presentation of it flip-flop from chapter to chapter, making it an inconsistent mess by the end. Bullying is a serious topic that I’d prefer to be handled seriously and I Belong to the Baddest Girl at School just doesn’t deliver on that and offer anything redeemable from this arc. It does not help that Yodo seems to be sticking around among the cast beyond this volume too, despite the story arc being more or less over and the resolution being subpar.

I Belong to the Baddest Girl at School Volume 4 comes to the West thanks to One Peace Books and continues to be translated by Emily Balistrieri. The translation reads well with no issues to note. Volume 5 is currently scheduled for an English release in October with the 6th and final volume following in December.

Overall, I Belong to the Baddest Girl at School Volume 4 proves a disappointing read that doesn’t improve things like I hoped and instead leaves a bitter aftertaste. It’s getting increasingly difficult to recommend this one and I fear this is the final nail in the coffin for a lot of readers, which is a shame, given the promise it showed early on. 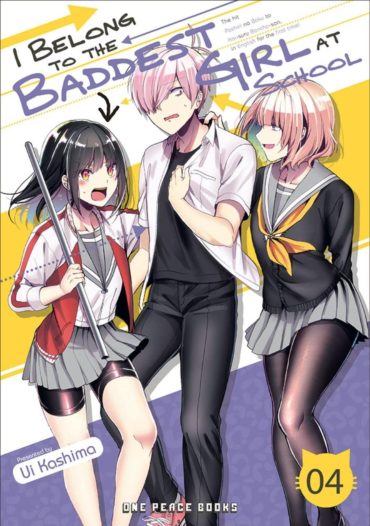 Title
I Belong to the Baddest Girl at School Volume 4