Volume 6 of Orient left Musashi separated from the rest of his band, as each of them have been placed in different platoons for the upcoming battle against the Demon God that has taken over Awaji Island. Volume 7 picks up directly from there, as each of the different factions in Musashi’s platoon dukes it out for control of the group. Getting into petty squabbles might not be the best idea however, as there is a lot more going on here than Musashi realises. As much as the Uesugi band’s leader, Tatsuomi, is respected, there are plenty of people in his court that would use the battle for their own ends, while in the shadows, the Obsidian Eight begin to move forward with a new plan to claim the Obsidian Goddess for themselves.

While the previous volume was more of a transitional stopgap, this one is jam-packed with new details and is very action-heavy, with a few good fights making up the bulk of the volume. It’s good to see the focus placed on the action again, as the artwork gets satisfyingly punchy, particularly in the opening fight when  Musashi goes up against Akihiro Shimazu and Katsumi Amako. It gives a chance for the sword-to-sword combat to shine, rather than focusing on the sword spirit powers that have so far been used in the demon battles. This also presents an opportunity to show how Musashi stacks up against his fellow samurai, something we haven’t really seen outside of the fight with Shiro and Nanao. It doesn’t develop him too much, but it at least makes an effort to show his typically straightforward ‘shonen anime protagonist, hit it head-on’ mindset isn’t going to work here.

The manga doesn’t linger on this for too long though, as with a lot of plot points to get through, it moves things on quite quickly. The pacing here is great, as there’s always something going on that is moving the story forward, where the fights never become boring or outstay their welcome. The first assault on Awaji Island is particularly striking thanks to the horde of cool monsters that have to be fended off: giant whale or narwhal-like creatures called Slit Mouths, which obviously have giant gaping mouths plus incredibly tough horns. Their overall design seems to be very yokai-looking, but at the same time inspired by Western creatures like the kraken in the way they try to sink the samurai ships.

There are also two new characters introduced here, one being the cool Kanetatsu Naoe, who turns out to be not just a (rarely humble!) tax collector, but one of the Uesugi band’s strongest warriors. He’s a simple and honest guy but seems like a solid addition as a side character, working as yet another samurai for Musashi to idolise. The other, Yataro Inuda of the Obsidian Eight, is sadly the complete opposite, feeling very uninspired being an ugly gigantic dude surrounded by a harem of naked young girls. While his design screams wretched villainy, the Jabba the Hutt vibe comes off as dated and out of touch, particularly with how young the girls servicing him look. It’s certainly a bit of a shame, but at least there’s a really good twist at the end of this volume about one character related to him that is actually really well disguised.

Some of the other plot points that are developed here however miss the mark. The main themes of this volume are the value of teamwork and what it takes to be a good leader, but I don’t think it gets the message across in an effective or consistent way. Musashi’s collaborative form of leadership is pitted against Akihiro’s dictatorial style, forcing the other unit members to obey on penalty of death. While it initially tries to portray Musashi’s ideals as being better, it weirdly shifts gears halfway through to preferring Akihiro’s approach, in that it’s better to just follow orders without question and fit into the mould. While Japan fits into that more in terms of its social make-up, I find it odd it’s not met with criticism after the earlier clash between the two ideals. Things are then moved more off-base by pushing Musashi into a negative mindset and undoing a lot of his character development from previous volumes, making his past achievements feel worthless.

When it actually gets to the crux of the problem – Musashi being inexperienced and not knowing what he is doing – it works, but I don’t think it needs to belittle him so much, even though his naïve attitude does make him a frustrating character. There’s also an issue with it tending to repeat information that the reader already knows, which can be a bit tiresome. Some things are elaborated on a bit more, but for the most part it’s stuff that you have either read or should have figured out before.

Orient continues to be published by Kodansha in both digital and physical formats. The physical copy is well presented, while translation is handled by both Nate Derr and Kevin Gifford and reads perfectly well with no issues to speak of.

Overall, Volume 7 of Orient successfully ramps up the action and presents us with a fun series of fights but misses the mark in what it was going for with the direction of the story, confusingly rolling back Musashi’s character development and running opposite to the message it was trying to convey. It’s still doing just enough to keep me going with it in terms of the art and action, but it’s definitely not as compelling a read as it has been in some earlier volumes. 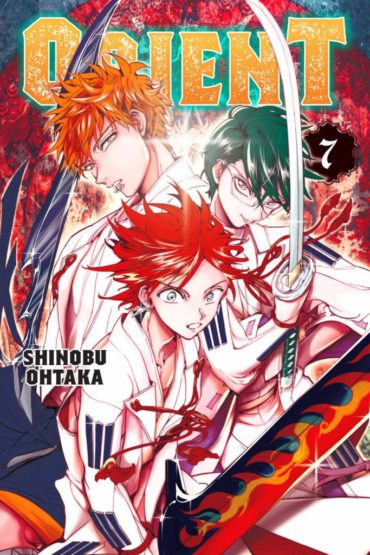