After being delayed for quite some time, we finally have in our hands the first season of Golden Kamuy, Studio Geno’s adaptation of Satoru Noda’s thrilling manga. Has it been worth the wait though? Let’s find out! 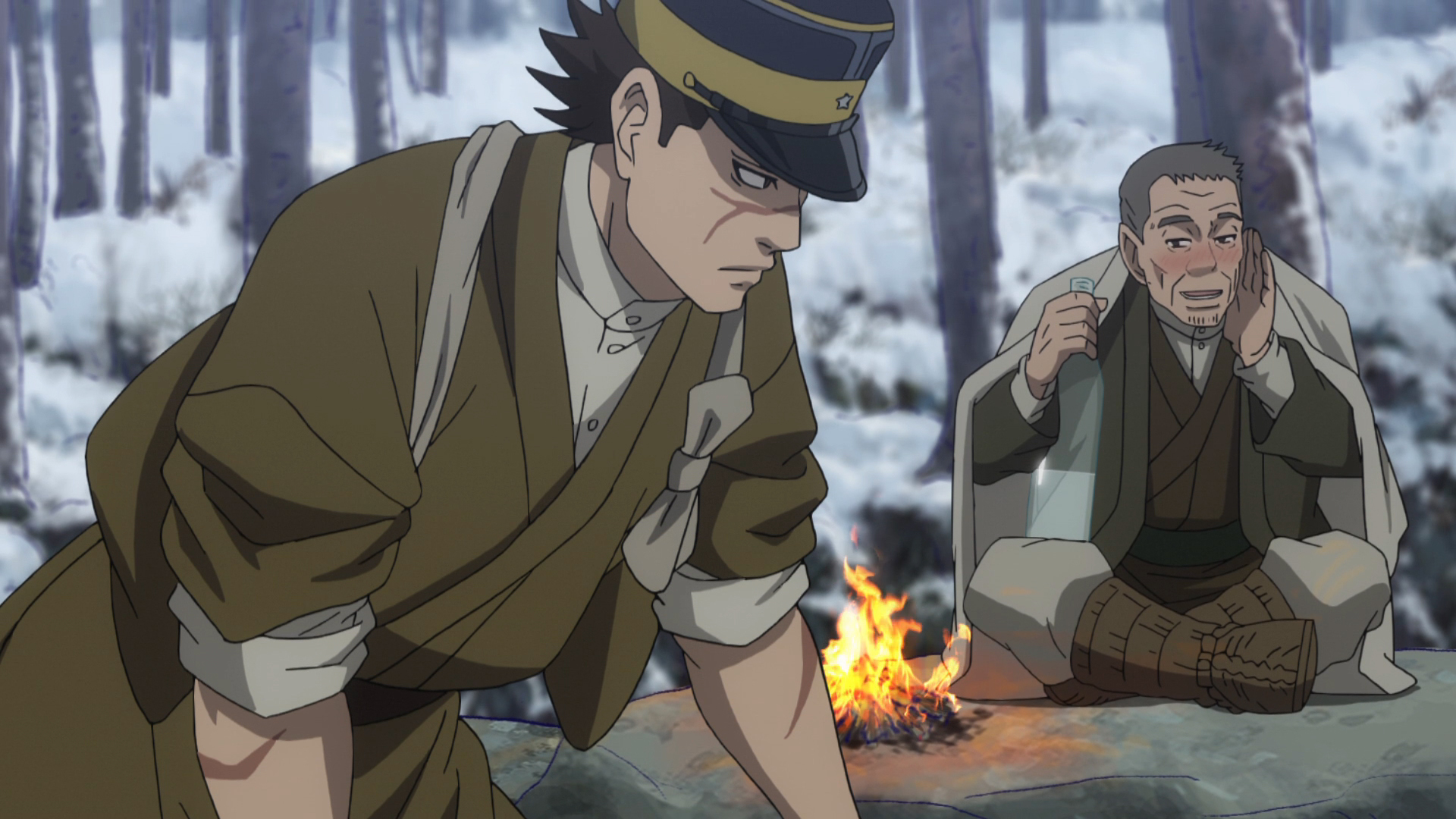 Set in Hokkaido against the backdrop of the Russo-Japanese War at the beginning of the 20th Century, Golden Kamuy is a gritty and thrilling Japanese-styled Western adventure that pits various factions against each other in the hunt for a hidden stash of Ainu gold.

It largely follows the former soldier Saichi “Immortal” Sugimoto, who enters the hunt after hearing a strange story from a man he meets while out panning for gold to raise money for a fallen comrade’s wife. Supposedly, after stealing the gold from the Ainu and landing in Abashiri prison for it, a man going by the name “Nopperabo” tattooed a map leading to the gold on the bodies of other prisoners. After a break-out from the prison, the prisoners scattered all over Hokkaido, meaning that to find the gold, each one must be hunted down and stripped of their skin. Of course, this man is one of the former prisoners and tries to bump off Sugimoto for hearing too much but ends up being mauled by a bear. After seeing his body and becoming convinced that the Ainu gold is out there, Sugimoto begins his quest to hunt down all the prisoners and claim the gold, joined by a ragtag bunch of companions he picks up along the way, including an Ainu girl called Asirpa and the comedic lout Shiraishi. 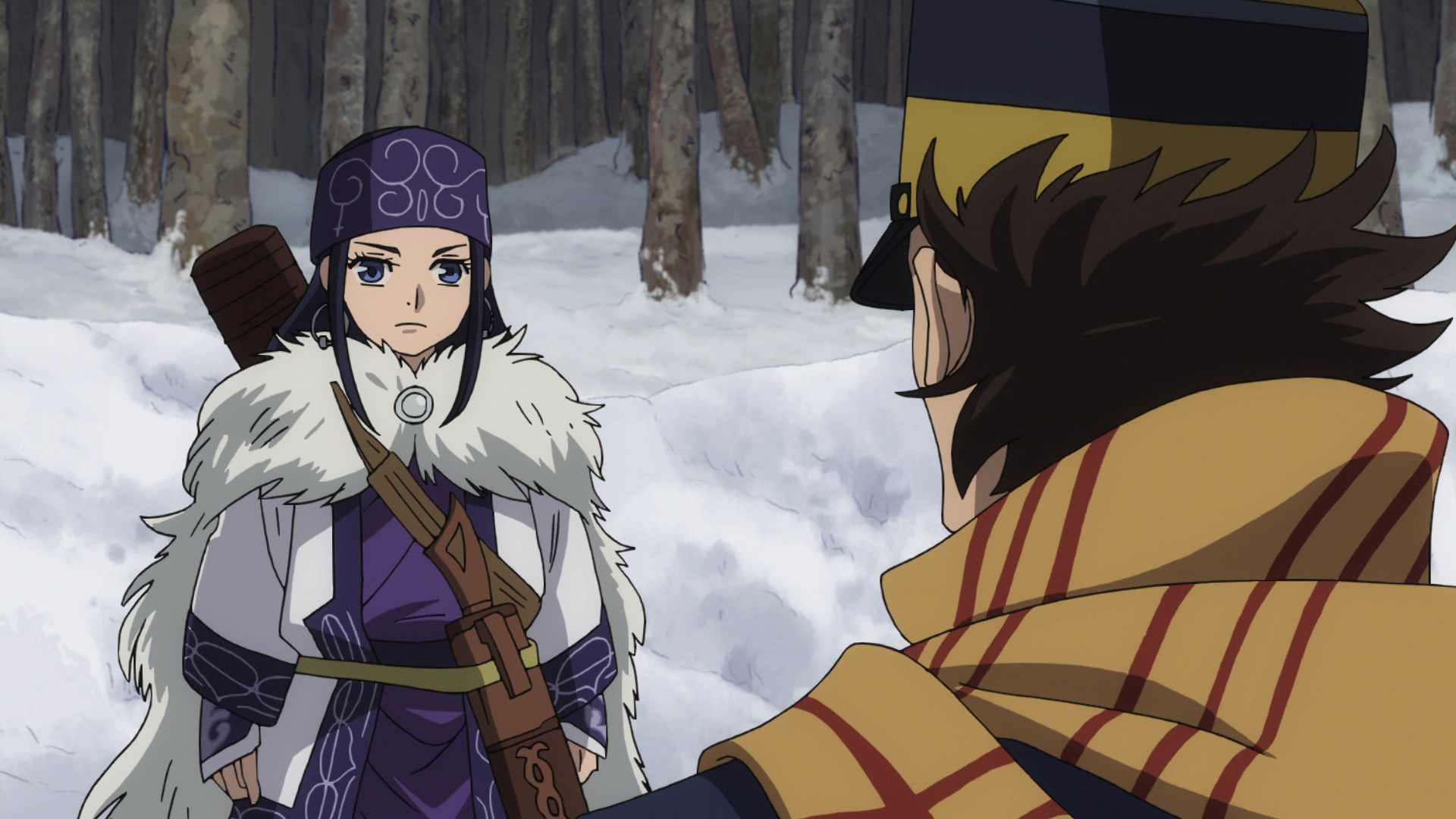 While I’ve not read the manga, after sitting through all three current seasons of Golden Kamuy, I would say that this is a show that constantly evolves and gets better over time, as this first season often comes across as rather awkward. This is mostly because it has to set up a lot of the plot and characters and, as a result, its pacing can seem quite sluggish. Its opening episode is very heavy on the exposition and it just takes a while to get things going and pull together each of the major factions that we’ll see battling it out for the prize. As it chops and changes between different characters and plot points, it can often seem quite unfocused, and first-time viewers and those with no knowledge of the source material may struggle to fit the pieces into the larger narrative as a lot of it doesn’t feel relevant. They are, however, necessary for the series later down the line; you simply don’t know it yet.

Despite this, it still comes off as quite gripping as Sugimoto and the rest of his gang gradually encounter some of the prisoners and end up in fights to the death with not only them, but the other factions who also want the gold. I really like the execution of the action sequences, and there’s a real sense of threat where you don’t know if Sugimoto is actually going to pull through or not, which leads to some hilarious scenes of him screaming “I’m the immortal Sugimoto!” and pulling out a victory against all the odds. 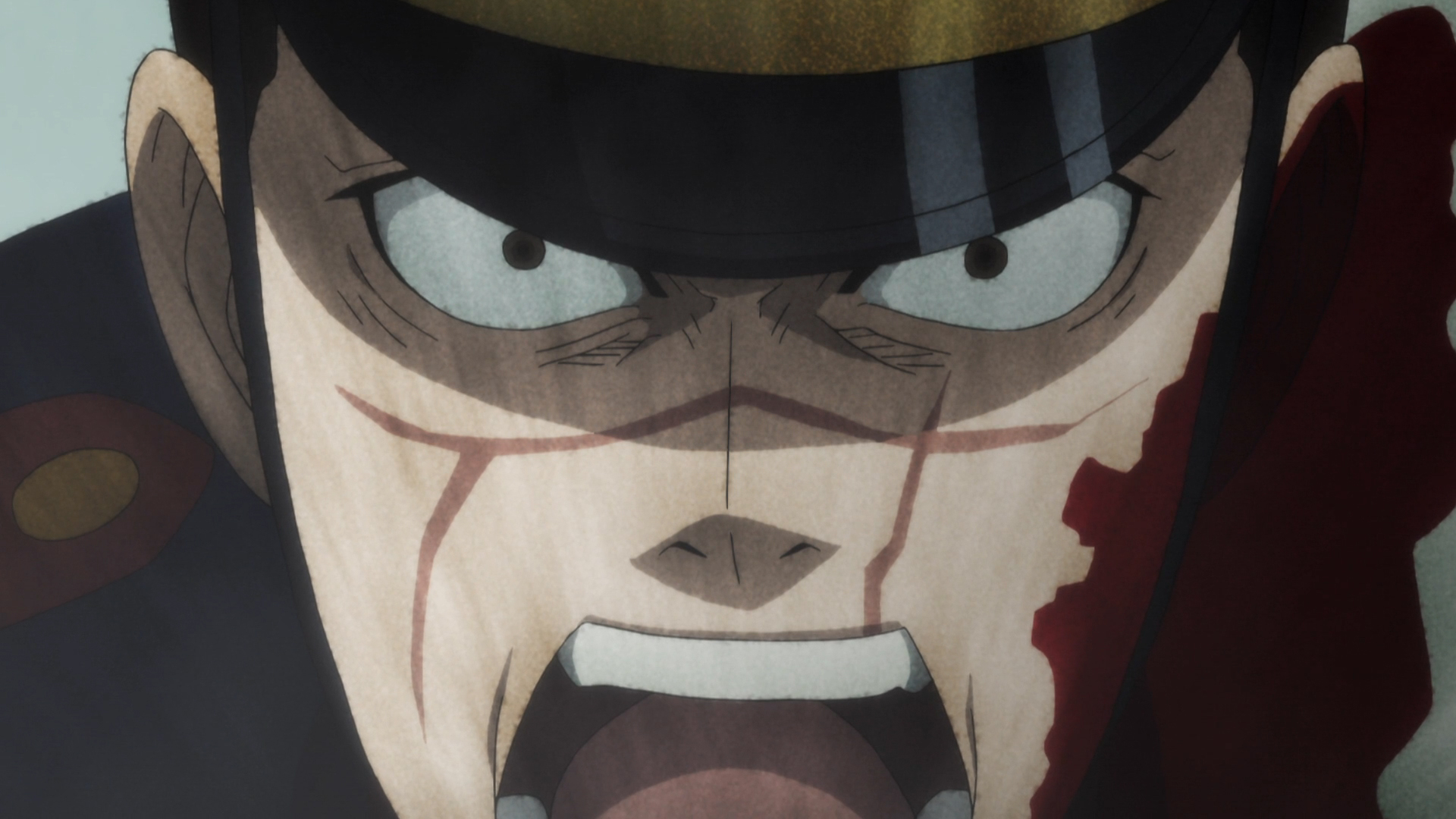 I found the characters to be all well written which shows off the strength of the source material. While you’ve kind-of got good guys and bad guys from Sugimoto’s perspective, it’s really not as simple as that, as many of the characters blur the lines between good and evil and have varying motivations for why they want the gold. Some, such as Lieutenant Tsurumi of the Hokkaido 7th Division or former Shinsengumi leader Toshizou Hijikata, want it to start a war of independence, while others, like many of the prisoners we see, want it for themselves, or just to help others, like Sugimoto.

There’s a really unique sense of humour it likes to play with here too, as the cast are all equally fascinating and have a bunch of fun quirks that you do get a laugh out of, whether that be Lieutenant Tsurumi’s brain leakage from his war wound, Shiraishi’s ability to dislocate his joints in his frequent escape attempts, or Asirpa’s dislike of miso because it looks like poop. Stuff like this really opens the characters up and allows you to get that sense of attachment to them as you get to know them as real people. It deliberately wants you to pick a side to follow, to see them survive against all odds and make it to the gold at the end. 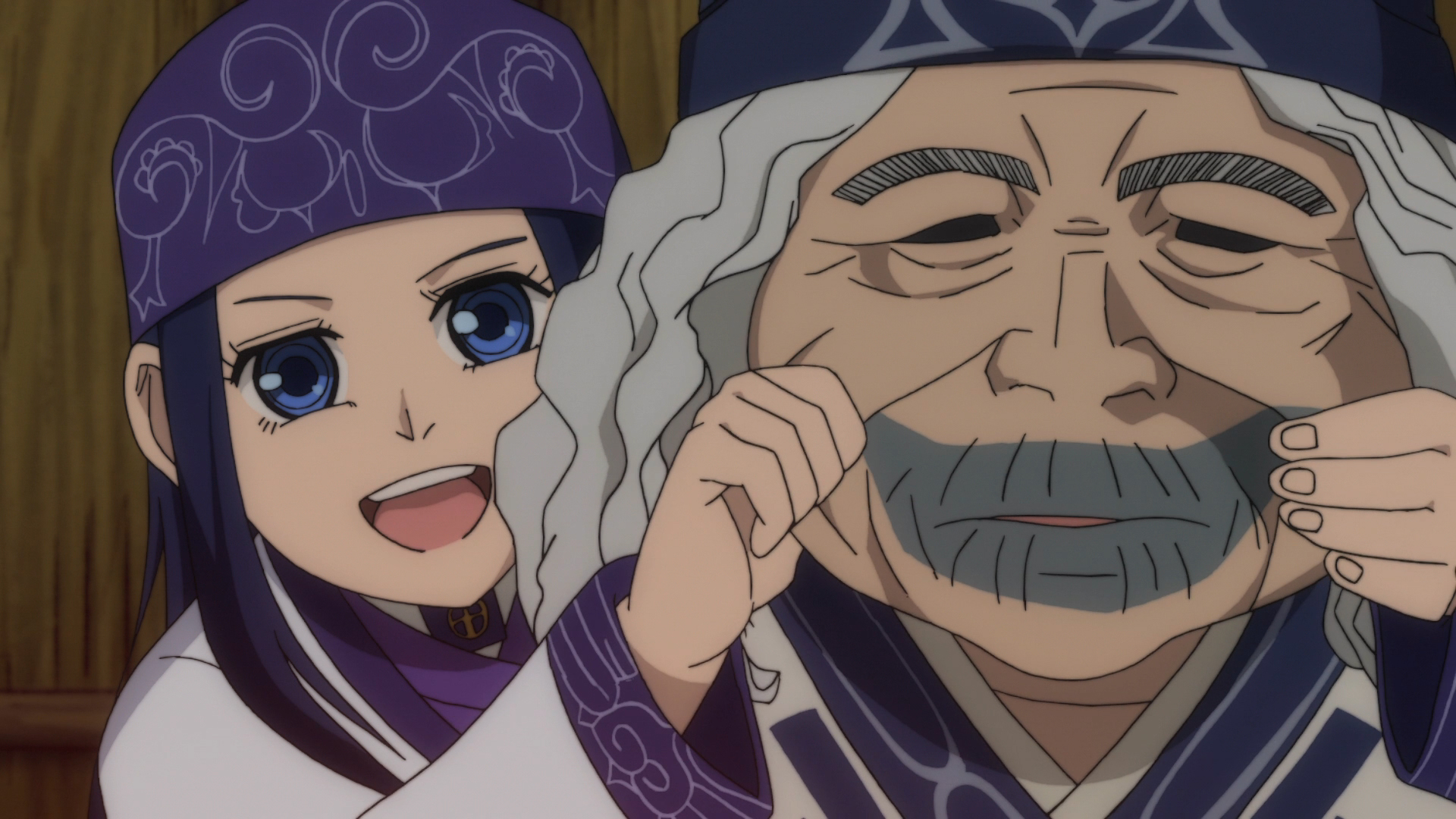 Where the series really surprises though is in its representation of the world and its loving expression of Ainu culture, as we see through Asirpa’s eyes how this group of people lived before the Japanese and Russian colonists took over. I love how it goes into a surprising level of detail on their traditional hunter gatherer ways and gets across how they tried to live in harmony with the land, coming off as very respectful and understanding towards them. It also has a gourmet side and revels in showing off traditional cuisine, so we see the characters hunting the animals in the forest, then preparing them and sampling the dish. 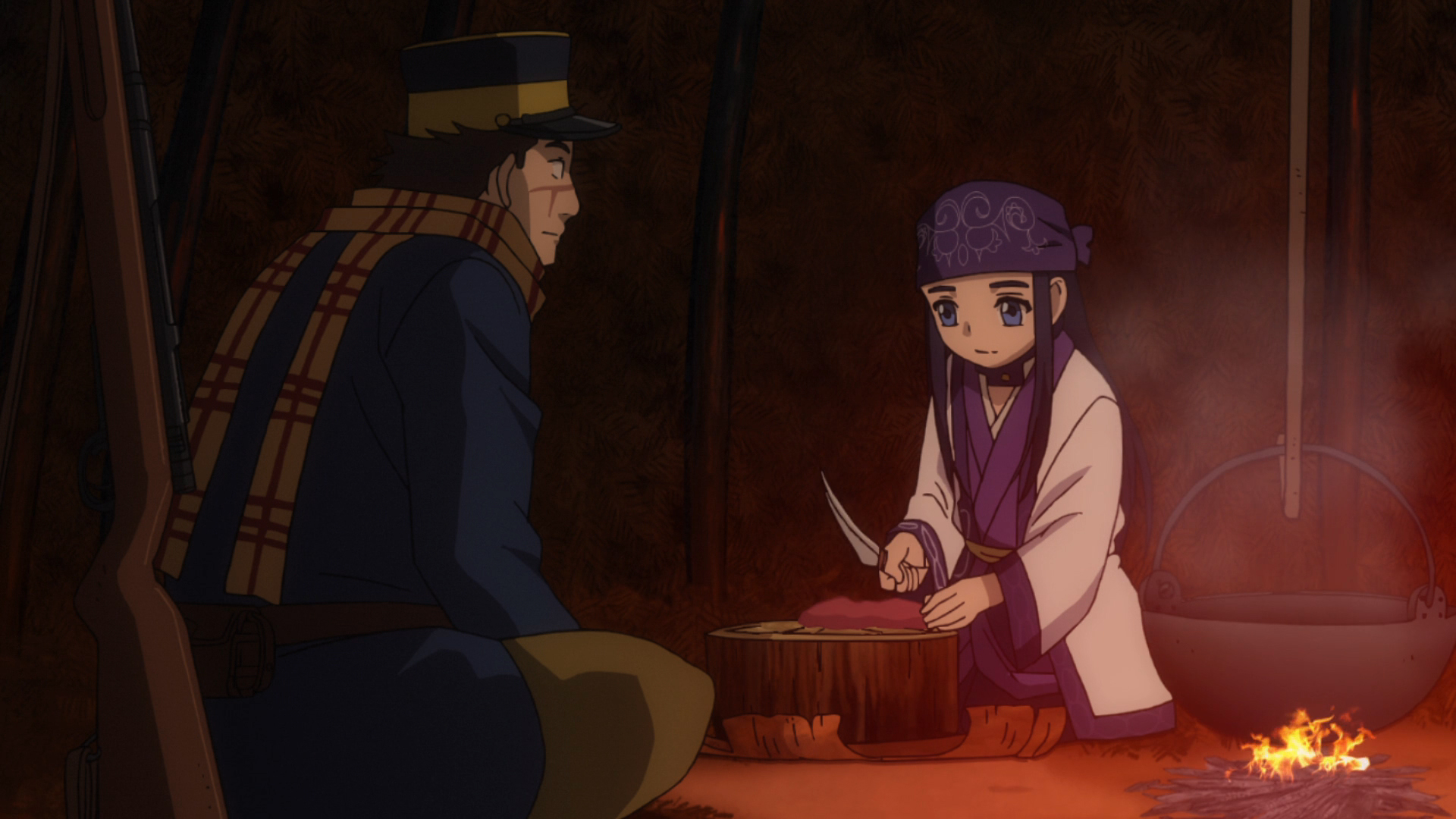 Animation production is handled by Geno Studio, who have given the series a strong and confident art style that fits its more mature seinen trappings. This not only looks great in depicting the characters but does well in showing off the beauty of Hokkaido as well. Action scenes are fast flowing, with some tense shootouts. One of the criticisms against the series when it first aired was that its use of CGI for things like the animals in the series wasn’t great. I’ve personally always felt that this criticism was overblown, and the CGI looks okay, it’s just that its difficult to get it to mesh with the more traditional 2D animation, as it is noticeably distracting in those first couple of episodes.

The soundtrack, composed by Kenichiro Suehiro (Fire Force, Re:Zero) is pretty good too and fits in well with the setting, often feeling rather jaunty and rustic but able to up the tension when it needs to. The show also features two fantastic songs in its opening and ending animations, with my favourite wolfy wolf boys MAN WITH A MISSION providing opening theme “Winding Road” and rock band THE SIXTH LIE providing ending theme “Hibana”. It is also worth noting that the opening uses English credits and as a result loses the tattoo effects that gave it its sense of style, which is a bit of a shame. 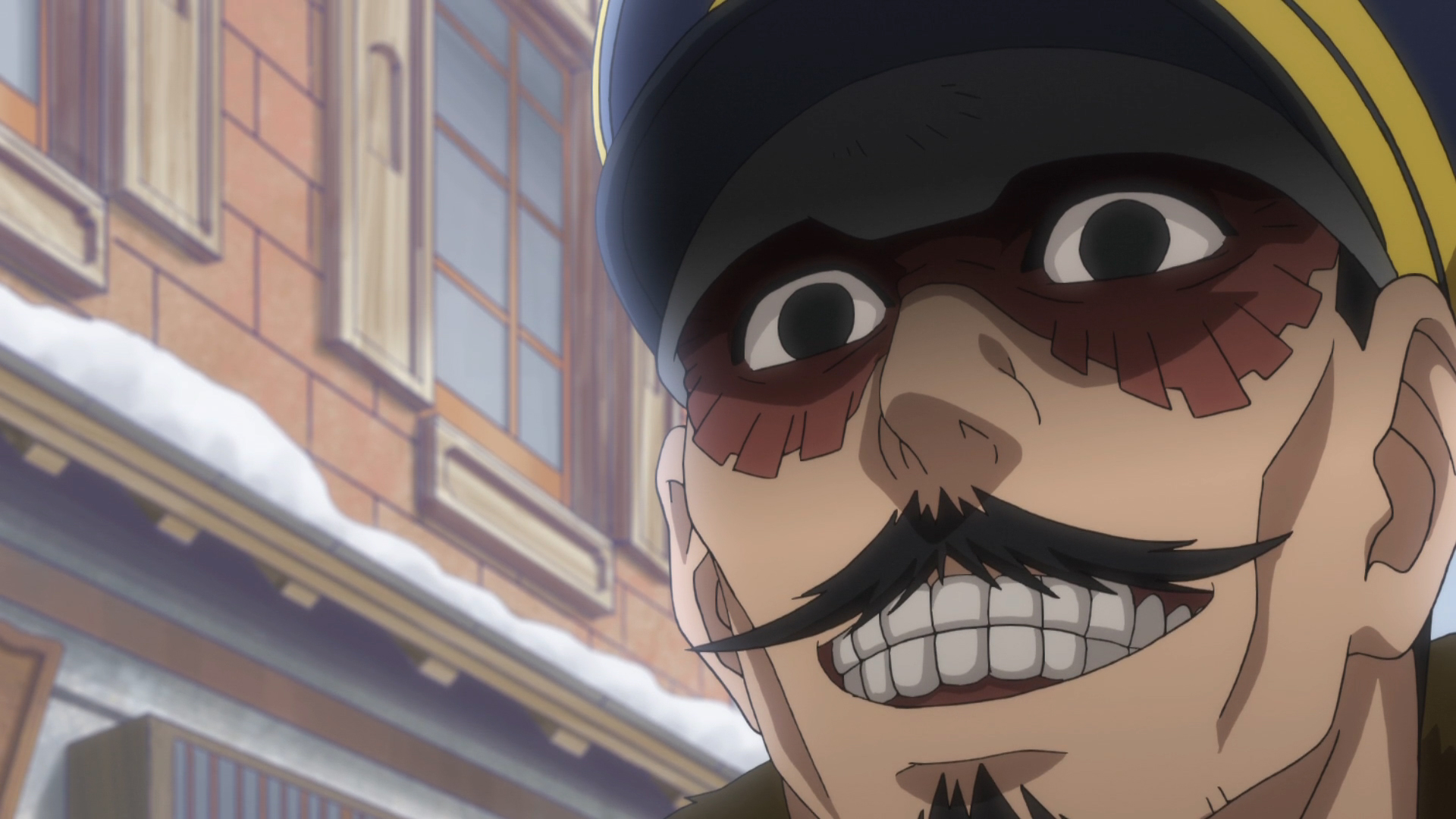 Golden Kamuy comes to the UK via Funimation, with all 12 episodes of the first season spread across two  discs with both the English dub and Japanese audio with English subtitles. The voicework in either language is great, and really helps build each character and their personality. I quite liked the voices for the more grizzled characters in the Japanese, for example Jouji Nakata (Fate/stay night franchise, Code Geass) as Toshizou Hijikata and Houchu Ohtsuka (Demon Slayer: Kimetsu no Yaiba, The Duke of Death and His Maid) as Lieutenant Tsurumi, while in the English dub I think Ian Sinclair and Monica Rial nail the two leads as Sugimoto and Asirpa respectively. The series is also notable for its use of the Ainu language in its dialogue, which adds to its authentic portrayal of the region and its people. 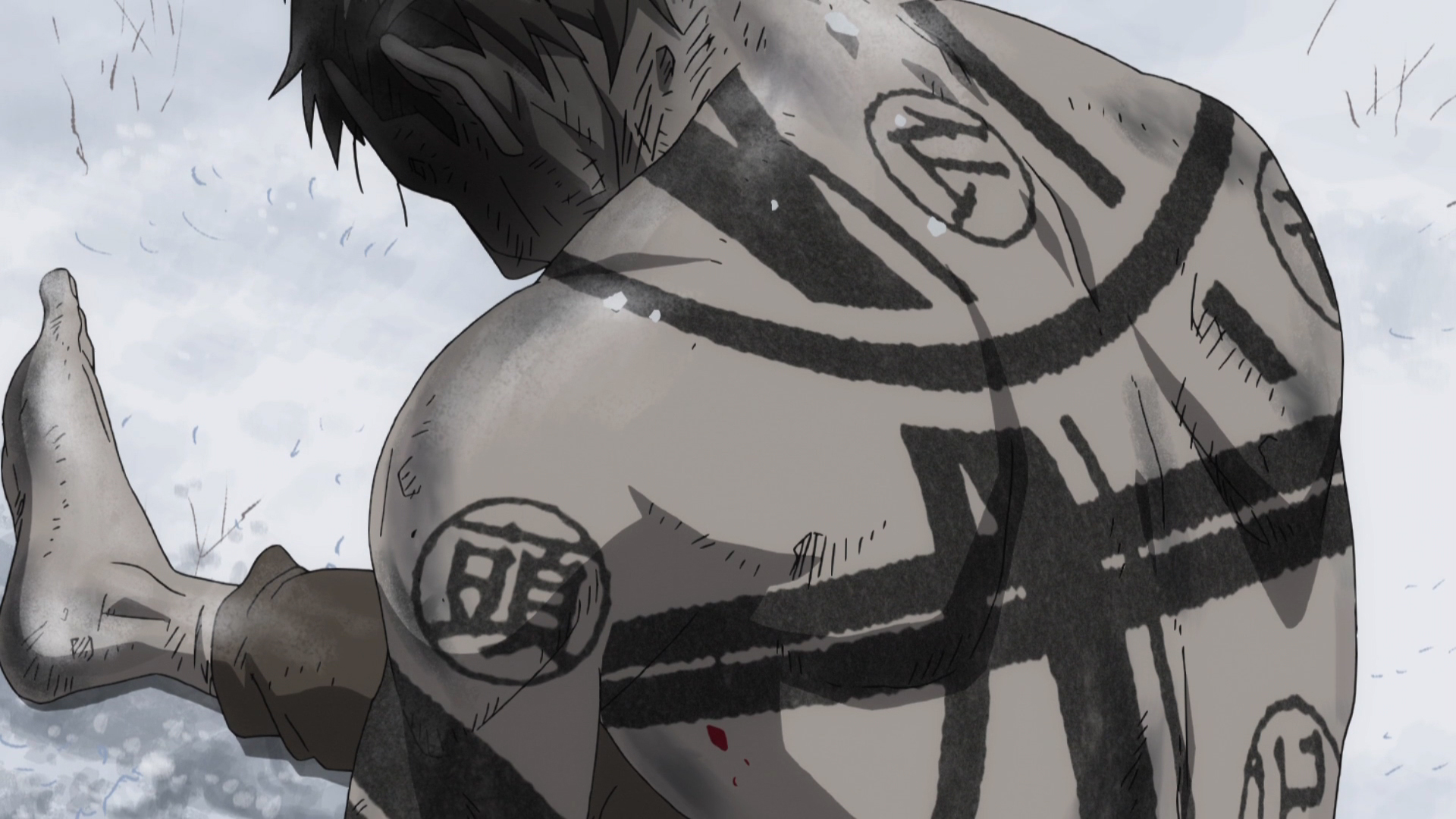 Overall, this first season of Golden Kamuy comes off as a gripping and humorous seinen series that puts its best foot forward with its cast of eccentric characters, high stakes action, and fantastic world building with a deep respect for its subject matter. It can also be a little awkward at times, with slow pacing and a plot that chops and changes between different characters that first-time watchers may struggle to piece into the larger narrative. Don’t let that put you off though, as successive seasons have shown that this is a diamond in the rough and worth watching if you want something pretty unique. 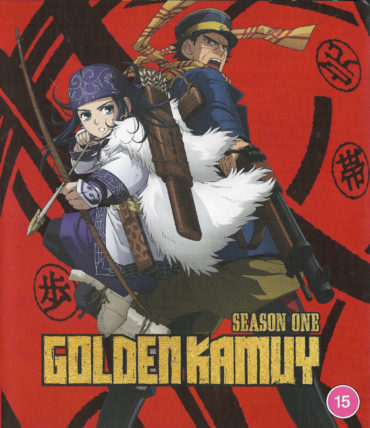 Season Two of Golden Kamuy is a solid improvement over the first, going deeper into the series’ fantastic cast of characters with some moving backstories and character development, while wrapping up this arc of the story with a thrilling climax.