Since My Next Life as a Villainess: All Routes Lead to Doom! exploded in popularity, many of the English publishers have been eager to jump aboard the popular villainess subgenre with new titles. The latest offering from Yen Press is Cross-Dressing Villainess Cecilia Sylvie, but does it prove an entertaining read? Let’s find out!

The story follows Japanese high-schooler Hiyoro, who finds herself reincarnated into an otome game as villainess Cecilia Sylvie. Naturally, Cecilia is destined to die young, due to being the villainess and Hiyoro has no intentions of letting a bad end reach her, so to avoid this she decides to cross-dress and become “Cecil”.

Cecil’s story starts in earnest when she’s attending high school in this world, which is where she’s destined to meet the heroine and the many love interests that caused her to die in the game. Cecil thinks that passing herself off as a man means she can avoid all the romance flags and enjoy a happy life. She’s even crafted a whole storyline about Cecilia being far too ill and fragile to attend school to stop anyone wondering what’s happened to her, a storyline backed up by her brother Gilbert whom she’s let in on her secret of being reincarnated from Japan.

Of course, nothing is ever that easy in these kinds of storylines and Cecil quickly finds herself embroiled in the heroine’s storyline when she replaces Gilbert as a knight destined to protect the hero (this comes included with a magical bracelet, which largely goes underutilised in the plot). The other problem is that Cecilia is engaged to a prince called Oscar, who also attends the school and is livid when he hears that Cecil has seen her when he can’t, because of her poor health.

But perhaps the biggest problem is that Cecil’s attempts at being manly just aren’t hitting the mark and she gains a reputation for being a feminine prince. Naturally, this leads Oscar to suspect there is something amiss here, but by the end of Volume 1, he’s yet to put two and two together to realise she’s actually the woman he’s engaged to. Another issue is that Cecil needs to get heroine Lean set up with one of the boys to help avoid some of the villainess’s bad ends, but Lean doesn’t act anything like she did in the video game so Cecil’s efforts are largely failing here too. It’s an uphill battle for our protagonist, but while she suffers, we readers have plenty of fun following her journey…

If you’ve read this far, I’m sure you’ve already noticed several similarities with My Next Life as a Villainess (which we’ll refer to as Bakarina from here on) both in the setting and characters. The idea of cross-dressing is perhaps the most unique element here, but in the long run, I think having so much in common with that series is a blessing in disguise. Bakarina’s protagonist Katarina is an airheaded idiot (to put it politely) whereas Cecil is far more aware of the dangers of her situation and puts a lot more effort into her plan. Keeping her identity a secret and spending so much time binding her chest and styling her wig takes a lot out of Cecil, but she never once slacks on it, for risk of being found out. Her downfall is seeing all the people around her as simply being characters who can be easily manipulated, but even then, how she deals with the twists and turns of the narrative are perhaps more interesting than Katarina’s decisions in Bakarina.

The other big positive here is that the cast surrounding Cecil is far more assertive than those in Bakarina and I can imagine the romance will progress much faster as the series goes on. As you might expect, brother Gilbert is already in love with Cecilia and does his best to support and protect her, despite her being completely oblivious to his feelings. He also has a heated rivalry with Oscar (which again, Cecil doesn’t understand) and is trying his hardest to get Cecil to notice him. Meanwhile, Oscar desperately wants to see Cecilia but he can’t deny that for some reason Cecil is starting to make his heart flutter, especially once they spend a night sharing a small room! Lean too has her reasons for wanting to be close to Cecil, but given those aren’t revealed until late in the book, I shall say no more there…

I think the biggest negative is simply the fact that if you’ve read a few villainess stories before, particularly if you’ve read Bakarina, there isn’t anything original here. Instead, it gets by with a fun set of characters who are at least a little more self-aware than the typical cast in a series like this. I don’t think that’s a bad thing  since this book does prove an enjoyable read, but that ultimately hinges on how much you care about this genre.

Author Hiroro Akizakura started this series as a web novel, which later got turned into a light novel in 2019 and is ongoing at four volumes. Akizakura does have another series published in English by Cross Infinite World titled Akaoni: Contract with a Vampire, but this is the first of their work either in Japan or the West to run for multiple volumes. That makes me wonder if Cross-Dressing Villainess will run out of steam as it goes on, but for now, it seems to have plenty to keep itself busy with, plot-wise.

As previously mentioned, Cross-Dressing Villainess Cecilia Sylvie comes to the West thanks to Yen Press and has been translated by Sarah Tangney. The translation reads well with no issues to note. Illustrations for the series have been handled by Dangmill (who for some reason doesn’t get a credit on the cover) who captures the personalities of the cast well in a variety of images. However, unlike the majority of Yen Press releases, there are no colour pages. which may prove a disappointment for some. Volume 2 of the series is currently scheduled for an English release in April.

Overall, while Cross-Dressing Villainess Cecilia Sylvia doesn’t bring anything new to the villainess genre, it does capitalise on the better tropes and presents a fun set of characters. If you’re not a fan of these kinds of stories, this won’t be the light novel to change your mind, but if you do enjoy them, then you’ll certainly want to check this out. 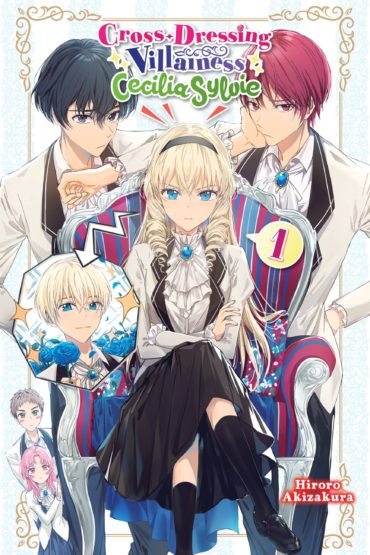 In Volume 2 of Cross-Dressing Villainess Cecilia Sylvie, our heroine finds herself in even more trouble as she tries to find someone else to take over her role as Holy Maiden, and love interest Oscar is a step closer to figuring out her true identity.