In Volume 1 of Cross-Dressing Villainess Cecilia Sylvie, we met reincarnated villainess Cecilia, who attends school as her male alter ego Cecil, in hopes of avoiding all her bad ends. Naturally, nothing is going to plan. Cecil has found herself embroiled in what should have been the protagonist’s storyline. To make matters worse, Prince Oscar (engaged to Cecilia), is starting to suspect something’s fishy about Cecil’s identity…

As we reunite with our heroine, we find her racking her brains to work out how to get one of her classmates to take over her role as heroine. Ordinarily, this role should belong to Lean; unfortunately, this Lean isn’t the same as in the game because it turns out that in this life, she has inherited the soul of Cecil’s otaku friend from her past life. Rather than follow the protagonist’s route from the story, she’d rather stand on the sidelines and watch over Cecil’s antics.

Luckily for Cecil, there is one other candidate to become the Holy Maiden (the protagonist’s role) – a girl called Emily. However, Emily got attacked just before the start of the school year and has been in a coma ever since, so if Cecil wants to push her into the role of protagonist she’ll first have to figure out who attacked her, why, and how to restore her health. On top of that, Cecil’s snooping around causes the attacker to start targeting her friends!

On the whole, this volume is more of the same, with Cecil desperately trying to keep her real identity hidden and running around sticking her nose where it doesn’t belong in a bid to avoid her bad ends. Thanks to her brother Gilbert, and Lean, it does prove highly entertaining even while following the usual villainess tropes. I find myself especially fond of the fact that Lean is also a reincarnation since not only does it give Cecil someone to depend on who also has in-depth knowledge of the setting, but their relationship is different to any of those Cecil has forged since being born into this world.

This book also tones down Gilbert’s love-hate relationship with Oscar, which I appreciate since that often took away from both of their charms in Volume 1. Gilbert on the whole is still a little too possessive of Cecil for my liking, but I think author Hiroro Akizakura has managed to tone his personality down appropriately, helped by giving us a glimpse into his history before being adopted into Cecil’s family.

Like Volume 1, this instalment comes in at a little under 200 pages which makes it a snappy read that doesn’t overstay its welcome. It’s certainly easier to enjoy Cecil’s adventures when they’re short and sweet as opposed to if they were a larger outing (and I suspect there isn’t enough substance, should that have been the case). This also means we get to spend small amounts of time with all the cast without anything having the chance to annoy us, which certainly could have been a possibility, given the number of quirky personalities presented here. Honestly, it’s still not all that original, but Akizakura has written a fun story and that’s what matters most.

Cross-Dressing Villainess Cecilia Sylvie Volume 2 comes to the West thanks to Yen Press and continues to be translated by Sarah Tangney. The translation reads well with no issues to note. Once again, there are no colour illustrations which is unusual for a light novel series, but that’s the same in Japan as well. Volume 3 of the series is scheduled for an English release in July and the first volume of the manga is now also available in English thanks to Yen Press as well, if you fancy seeing Cecil’s antics depicted pictorially.

Overall, Volume 2 of Cross-Dressing Villainess Cecilia Sylvie proves another entertaining read, provided you’re a fan of the villainess genre. There’s nothing particularly original on offer here, but I’m okay with that, given the cast and storylines are perfectly enjoyable as they are. If you were on the fence after Volume 1, this is unlikely to change your mind – but if you liked it, then you’ll be happy with what this one brings to the table too. 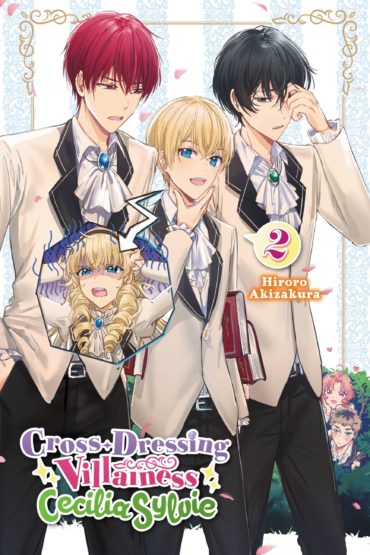 Cross-Dressing Villainess Cecilia Sylvie has a lot in common with My Next Life as a Villainess – but despite these similarities, does it offer an entertaining read in this crowded genre?