Last year Anime Limited brought Studio BONES’ new film Josee, The Tiger and the Fish to cinemas across the UK. During this release, it quickly won my favour with its emotional story, beautiful animation and a fantastic soundtrack. Now the film has made it to home video where it will hopefully delight anime fans who missed out on its initial release.

The story follows university student Tsuneo, who is majoring in biology and dreams of studying abroad somewhere. One day he saves a girl whose wheelchair has gone out of control, rolling down a slope. This meeting goes on to change his life in ways no one could have expected.

The girl is known as Kumiko, although she introduces herself to Tsuneo as Josee (named after a character in a book she loves). Josee lives with her grandmother and is wheelchair-bound as she’s unable to walk. Although Josee doesn’t get on with Tsuneo at first, her grandmother asks the boy if he wouldn’t mind working for her to help with Josee to which our protagonist readily agrees – after all, studying abroad is sure to be expensive.

Josee is usually housebound and after the accident that caused her to crash into Tsuneo, her grandmother refuses to take her on any more evening walks. However, Josee dreams of seeing the ocean and if no one is willing to take her, perhaps she’ll just need to find her way there on her own!

Tsuneo catches her on an escape to see the ocean and goes along with her wishes, which ultimately leads to the two going on other trips together when Josee’s grandmother is taking her afternoon nap. These bring them closer together as friends, as well as serving to teach Josee all about the world she’s been sheltered from.

What I like about this film is that both Tsuneo and Josee have strong personalities that bounce off one another well. At the start of the film, they really don’t get along and they bicker like cat and dog, but that ends up serving as a strong foundation for their relationship going forward. There are also plenty of supporting cast around the two as well, although the development they receive varies and in some cases isn’t quite enough to leave the viewer satisfied.

For my part, I wasn’t too bothered by the side characters being a little underdeveloped, since I was highly invested in Tsuneo and Josee’s story and at the very least, each character serves a purpose. The lives of the two leads change so much from meeting one another and it’s great fun watching that develop over the hour-and-a-half runtime. Despite the fact the characters are already adults, this story definitely has many of the hallmarks of a coming-of-age story. Especially when we see where the two are at the end of the story, compared to the beginning. On second viewing it’s even more evident that while Josee relies on Tsuneo for support at the start of the story, the second half sees Tsuneo leaning on her and by the end both have gained their independence and ended up in a better place.

The film is always entertaining, emotional and engrossing, even on repeated viewings. We laugh and cry alongside these characters, no matter how developed or not they may be. That’s the mark of great storytelling, the kind we often see from this studio. Tsuneo and Josee are both characters that are easy for us to get invested in and root for. They simply have undeniable charm.

The fact Josee is disabled also adds a unique angle to the whole story. We don’t normally see anime portray characters who are wheelchair-bound or disabled in some other way portrayed particularly well, but Josee does a good job of dodging most of the issues we’d normally encounter. It never feels as though Josee has no one but Tsuneo to rely on; she’s not dependant on him and chases her dreams. Yes, he might have been the catalyst for her starting to come out of her shell and seeing the world but in the grand scheme of things, she’s fine without him and I appreciate that. What might put some viewers off is the fact that Josee and Tsuneo quickly fall in love with one another and maybe the story would have been better off without that, but I think this was handled well and I found myself cheering for them.

As previously mentioned, Josee, The Tiger and the Fish has been handled by Studio BONES. The story is adapted from a short story by Seiko Tanabe, but as far as I can tell, quite a lot has been changed for this adaptation. As you’d expect from a BONES production, the film is colourful and full of life. The story takes place over the space of 8-10 months roughly and in that time we see the seasons change drastically, which gives the animators a chance to shine with some beautiful scenery. The comedy will also be very familiar to fans of the studio, with the witty comebacks and the teasing that the cast engages in.

All that’s missing is the team’s trademark chibi versions of the characters, but I think it makes sense to have held off on that for this story. Character designs may also prove familiar to viewers as they’re by artist Nao Emoto, who is the mangaka behind O Maidens in Your Savage Season. The designs fit really well with the style of animation BONES uses and I’d love to see more of Emoto’s designs in anime projects going forward.

The music has been handled by Evan Call (Violet Evergarden, Appare-Ranman!) and although the soundtrack didn’t play with my emotions as much as the Violet Evergarden one did, the compositions are still fantastic. Call makes use of a full orchestra’s worth of sound and always enhances the on-screen emotions. What we’re left with is a soundtrack that works well within the context of the film, but also provides a great listen on its own afterwards (and trust me I have regularly had it on repeat for the last six months!).

Where voice actors are concerned, I watched the film with its Japanese audio and both of the leads fit their roles well. Tsuneo is played by Taishi Nakagawa and Josee is played by Kaya Kiyohara. Neither of the actors appears to have done anime before, instead their roles have been largely in live-action dramas and films. That said, they play the characters well with a wide range of emotions, which is especially true in the case of Josee. For the English dub, Josee is played by Suzie Yeung (Mayumi Dojima in Pretty Boy Detective Club, Lena in 86) while Tsuneo is played by Howard Wang (Louis James Moriarty in Moriarty the Patriot, Kakushi Goto in Kakushigoto). While I prefer the Japanese cast, the dub is a fine alternative to the original and I think Yeung and Wang capture the personalities of the leads well. 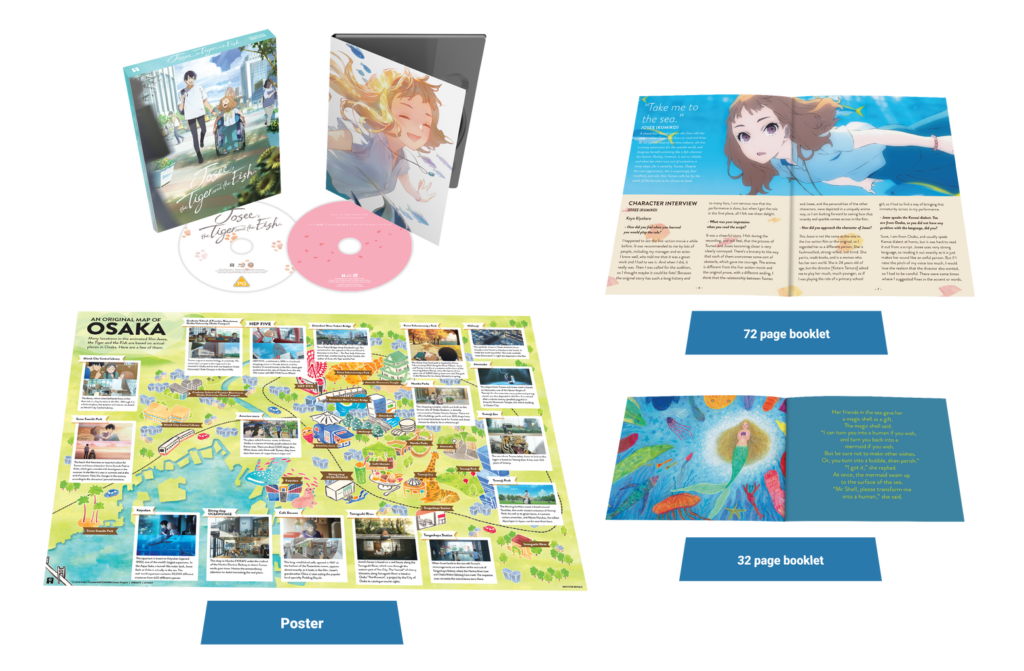 Josee, the Tiger and the Fish comes to the UK thanks to Anime Limited and is available on Blu-ray as a collector’s edition as well as having a standard edition release on both Blu-ray and DVD. The collector’s edition comes with a 72-page book filled with interviews, a map of Osaka highlighting locations shown in the film, a replica booklet of the children’s book Josee reads and a soundtrack CD. On-disc extras include an interview with the director, trailers, a clean ending and a ‘Work in Progress’ interview from Scotland Loves Anime (I believe this is from 2020 when the festival was almost exclusively online). This is a really nice collection if you find yourself as much of a fan of the film as I’ve ended up being.

Overall Josee, the Tiger and the Fish is a fun and emotional journey for us and Tsuneo and Josee herself. Not only is it great to see Studio BONES putting out a film, but it’s especially rewarding when the result is so good. If you’re looking for a new coming-of-age story, then look no further and please give this one your time. 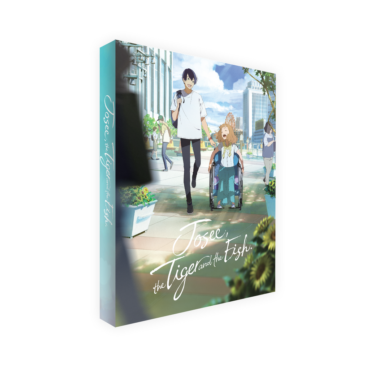 Title
Josee, the Tiger and the Fish

Josee, the Tiger and the Fish Theatrical Review