New York in the mid-1990s – and promising young police officer Kain Walker has a secret: he’s gay. Out of uniform, he cruises the bars of the city’s gay district, happy to indulge in a commitment-free lifestyle and one-night stands. But then he meets Mel Fredericks, a younger man who is just his type: good-looking, kind-natured, vulnerable and caring. Mel is recovering from a suicide attempt after the painful break-up of his last relationship. Kain feels that Mel is the one for him – even though he’s not very good at maintaining a monogamous relationship – and after some turbulent events, the two decide to rent a house together.

The time has come, Kain reckons, to take Mel to meet his parents; he’s a much-loved only child but he’s unsure how they’ll react on meeting his life partner when they discover they’re a man. Mel, who comes from a broken and abusive background, is wary – but also painfully eager to get on well with Kain’s family. When they go to stay with the Walkers, George (a teacher) is accepting and welcomes Mel – but Ada is confused and even hostile. Will she be able to overcome her profound disappointment at realizing she won’t be having grandchildren (this is the 90s and times have thankfully changed)?

In the meantime, one of Kain’s fellow police officers, Gersh Stoneman, has been hospitalized. Gersh, Jewish and married with a daughter, has AIDS and is dying. Kain has long known that Gersh is gay and the two – who have not always got on well – have a heart-to-heart. Gersh’s parting words to Kain, “You’ve met a partner you want to spend your future with…” resonate with Kain, making him re-assess how he feels about his relationship with Mel. 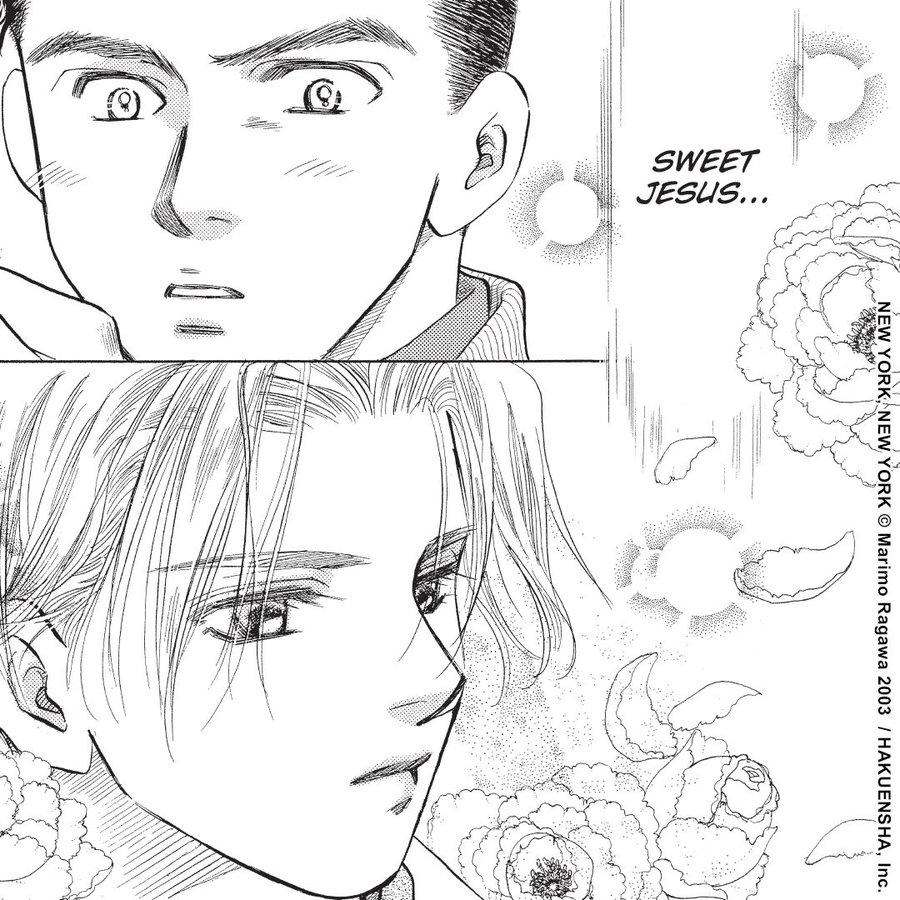 When I first encountered New York, New York in 2010 (in French from Panini) I had also read Sanami Matoh’s classic FAKE (1994) about two NY cops who start off as ill-matched partners solving crimes together and eventually become lovers – and Akimi Yoshida’s iconic Banana Fish (1985) also set in the US and dealing with gangs, illegal drugs and child abuse which, although never published as BL, has a very strong subtext, and had a massive influence on female mangaka. Marimo Ragawa has had a long and successful career since the 1990s with many shojo titles (her ongoing series Those Snow White Notes was made into a popular anime TV series in 2020-21) – no mean feat in a crowded market. But New York, New York was a ground-breaking manga at the time (was it maybe ‘safer’ in the mid-90s to set a BL story in a country other than Japan?), especially in the way that it deals thoughtfully, and sometimes sensitively, with the problems faced by its gay protagonists in a society that still had a long way to go to be accepting of LGBT rights. The terrifying spectre of AIDS in the days before medicine had caught up is another significant and tragic aspect of recent gay history – and one often completely ignored in BL (although condom use is mentioned in this manga). Interestingly, one of the most refreshing scenes is where Ada Walker, Kain’s mother, visits her best friend Shirley for tea and Shirley doesn’t really understand what Ada’s problem is regarding Kain’s partner, defusing her worries and prejudices in a delightful and frank way. Can Ada begin to thaw and look on Mel not as a threat but another son?

However, there are some aspects that I feel have dated (and that’s on top of some instances in the text meriting a sensitivity warning at the front of the book from the publisher). The biggest problem for me is Mel constantly being cast in the role of the victim. For heaven’s sakes, how unlucky can this boy be? This keeps the level of melodrama perilously high and in danger of tipping over into bathos. It also means that Kain has to be the one coming to the rescue, which in terms of dramatic stakes can only work once or, pushing it, twice, before it leaves the reader asking, “What? Not again?” In FAKE, Sanami Matoh gets away with repeated high-stakes drama episodes by alternating Dee, then Ryo in the role of rescuer (it helps that they’re both policemen). Also, the mangaka makes it difficult for us to ‘like’ Kain or empathize with him as he commits so many relationship faux pas (sleeping with your lover’s ex the first time you meet him?). These tear-jerking dramatic scenes come straight from soap opera – and it’s impossible not to feel your emotions being manipulated by the writer. The world of BL has changed and we expect more nuanced story-telling today. Nevertheless, it’s good to see that Ragawa was not afraid to introduce some very real aspects of gay life: HIV, AIDS and prejudice.

Marimo Ragawa’s striking graphic art has aged well (her style is instantly recognizable if you’ve read her recent Yen Press series with Narise Konohara The Vampire and His Pleasant Companions). It’s worth noting that the series has gained an OT 16+ rating, not Mature as, although several of the themes touched on (child abuse, suicide, rape etc.) probably need sensitivity warnings, there’s nothing sexually explicit in the artwork.

This handsome 2-in-1 oversized volume from Yen Press has a robust, full-blooded translation from Preston Johnson-Chonkar, evoking just the right tone of voice from contemporary movies and cop shows. Kudos to the cover designer (unnamed) for such an eye-catching and unusual cover, essentially a collage of images from the manga; there’s also an attractive colour page. The second and final volume (#3 and #4 of the original series) is due out in July. For those who are familiar with the original four-volume version, it’s worth noting that this edition ends at Episode III Scene 1; Scene 2 is, presumably, going to open the second omnibus volume. 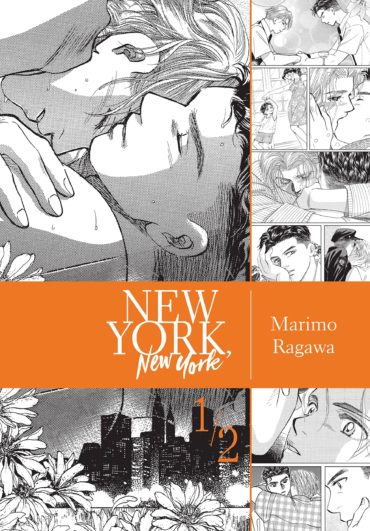 The second and final omnibus volume of New York, New York, the 1990s LGBT+ slice-of-life manga suddenly transforms into a serial killer drama when Mel goes missing. Does this unexpected change of direction make or break this classic series?