Up until that moment… we were truly happy…

All is at last going well for NY police officer Kain and his boyfriend Mel; even Kain’s parents have – after initial problems on his mother Ada’s part – accepted and welcomed Mel as their son’s partner. So when they learn they can get married in church, the two young men take the next step, holding a party for their friends after the ceremony. And then next day, Mel goes missing. (In these days of instant connectivity and smartphones, it’s a salutary experience to be reminded how difficult it was to keep in touch in the 1990s, especially when out and about. The last contact between the two is when Mel phones Kain from a payphone on the street.)

At first the manga follows Kain’s bewilderment and increasing desperation as the days that Mel’s been absent mount up and no one has reported any sightings. When a severed arm is discovered in the river with a wedding ring on one finger that turns out to be Mel’s (the inscription leaves no doubt as to its authenticity) Kain is devastated. But then an FBI agent – Luna Pittsburg – arrives. She tells Kain that Mel is alive. She then reveals that she’s on the trail of an elusive serial killer named Joey Klein from Wisconsin. She’s almost certain he’s the one who’s kidnapped Mel as his previous victims have all been blond and blue-eyed. A nail-biting game of cat-and-mouse ensues – and the narrative changes to show us Mel’s predicament, alternating from there onwards from the hunters to the hunted to increase the tension for the reader. As Kain and Luna’s investigations slowly lead them toward the suspect, time is running out for Mel. Will they find him in time – or will they be too late to save him?

There’s no doubting the mangaka’s heartfelt sincerity in creating the relationship between police officer Kain and his partner Mel. Marimo Ragawa is very skilled at portraying relationships, as demonstrated by her depiction of the family rivalries that arise in a talented but dysfunctional musical dynasty of shamisen players (Those Snow White Notes). You can detect the influence of many popular US cop shows in the way the action plays out – and I can’t help wondering whether the mangaka was persuaded by her editors to change the tone of the manga to ‘tense action drama’ and ‘psychological police procedural’ with the emphasis on the action and the psychology.  Sanami Matoh’s greatly influential FAKE features the wonderfully ballsy FBI agent Diana Spacey and Luna might be a nod in that direction, a little homage, even though she’s in no way a copy-and-paste borrowing. How you feel about this sudden swerve into a completely different genre of fiction will depend greatly on how much you enjoy reading serial killer cat-and-mouse thrillers which don’t shy away from depicting violence.

It’s not just ‘certain words and phrases’ in the text that the US publisher’s note at the beginning warns us about as being ‘currently considered outdated in the LGBT and Jewish communities’, I would argue that it’s the whole serial killer/Mel as victim plot that takes up most of this second omnibus volume that’s not aged so well. Mel has been forced to be the victim all the way through New York, New York and maybe Marimo Ragawa overplayed her cards here, exploiting the readers’ emotions (and poor Mel) once too often. For heaven’s sake, give the guy a break!

Nevertheless, the mangaka is a seasoned storyteller and, having decided to steer the story down a taut, nail-biting crime story road, putting her characters through the wringer and then some, she pulls it all off with considerable skill. It’s just a very different story from the LGBT+ narrative she presents in the first omnibus volume.

It’s impossible to discuss the final Episode without revealing the outcome of the kidnapping saga – and yet there’s a genuinely important plot development that I think is unusual for its time and worthy of praise (and possibly influenced several of the next-generation BL mangaka as we’ve had many charming slice-of-life books featuring gay parents and their children). So, look away if you don’t want to find out what happens after Mel is rescued and both men go through therapy to help them recover from their ordeals. They adopt a daughter: Erica is five and brings her two fathers – and Kain’s parents – much happiness. She’s a fighter and has to contend with the prejudice of others at school who don’t approve or understand that her parents are gay but the little family is strong as a unit and we see her at different ages as she grows up and they weather the problems of prejudice together. Warning: it’s hard to read the final episode without welling up, so have your tissues to hand!

This Yen Press trade paperback edition is just as attractive as the first volume, with its collage of black and white images on the cover and colour page insert. Again, I assume it’s the later Japanese omnibus edition from 2003, combining the original Volumes 3 and 4 but omitting the unrelated one-shot that appeared at the end of the final volume. Included this time, as a bonus, is one of the mangaka’s prose extras about Mel’s lovers before Kain. I’d like to have seen some of her mischievously amusing manga extras (to be found in the Panini single volumes) including detailing the exploits of her two cats, also called Mel and Kain, as they show a completely different side to her and lighten the tone after all the heavy drama.

Preston Chonkar-Johnson continues to provide a translation that captures just the right US cop show tone of voice; there’s plenty of authentic swearing, so be warned if you’re sensitive to strong language.

The sharp swerve away from LGBT+ slice-of-life in late 20th century New York in Volume 1 into serial killer cop drama in Volume 2 may prove too great a tonal shift for some readers. Others will relish the skilful plotting and exciting yet disturbing drama that plays out in this volume. Either way, New York, New York delivers a fascinating glimpse into the range of shojo manga at the end of the last century; it was published in Hana to Yume which also brought out Fruits Basket, Angel Sanctuary and Descendants of Darkness (amongst other popular other 90s titles). 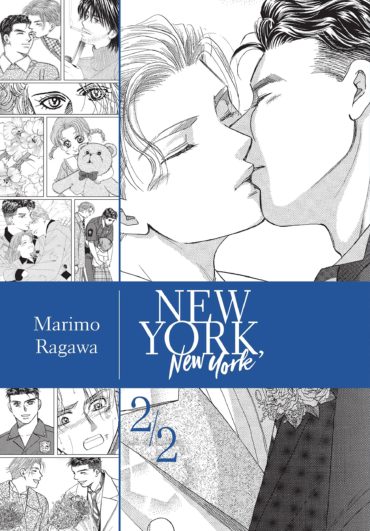 Yen Press bring out the first English edition of a classic manga: a gay love story set in 1990s New York that is not afraid to explore real-life issues that are still relevant today.