This is the first of six short films which conclude the story of this peculiar yet entertaining alternative history anime in which teams of schoolgirls fight each other in Second World War tanks.

We begin this film with the Ooarai Girls High School tankery team stranded on a wooden bridge being shot to pieces with seemingly no chance of escape. How did this happen? To find out, the story of this opening film is told in flashback.

Monocle-wearing student council member Momo Kawashima learns that she has not been accepted into any of the universities she applied for, leading to false rumours that she is being held back a year. In order to achieve a place at her chosen uni alongside the fellow members of the student council, she decides to find another tank on board the school (which is on a huge battleship) and enter the school into the prestigious Caterpillar Tread Cup.

Tankery team leader Miho Nishizumi and the fellow members of her “Anglerfish” team learn that there is a tank in the deepest part of the ship, full of the school’s roughest students. In the end, they discover a gang of piratical navy-inspired delinquents who have been using a British First World War era Mark IV tank as a smokehouse. In the end these students join them as the “Shark” team, as a tank is a ship on land. The school are then drawn into the Caterpillar Tread Cup against the French-inspired BC Freedom team. On the surface, Miho and her team have the match in the bag as the French team members are constantly fighting amongst themselves, but they soon discover their hidden talents.

One of the things that stands out for me regarding Girls und Panzer in general is that it has been going on for some considerable time now and the gaps between each instalment have been surprisingly large. The collection of six films began in 2017, and so far there has been a two-year gap between each one, with the fourth and fifth parts currently in production. Because of this, one of the things that happens to me is whenever a new Girls und Panzer anime comes out, it makes me think: “Oh, I forgot that was still going. I like this”, and it makes me want to go back and catch up on everything. It is, however, frustrating that this ‘finale’ is taking so long to complete. It might have been better to make a few longer films rather than many short ones.

Regarding the anime itself, one of the first things that strikes you is the production. The first shot you see is the side of one of the tanks being grazed by a speeding shell, and then being blown clean off, making for gripping action from the start. Then you combine this with the comedy in the show. Admittedly, much of the humour is basic and based on stereotyping, but for me it works. The new naval tank characters are particularly pleasing and add plenty of laughs, in particular when they challenge that anglerfish tank crew to a series of duels, with Hana taking part in a battle with their leader Ogin to see who can drink the most shots of (non-alcoholic) rum – which should not be confused with the character Rum, who also is part of the naval gang as the tank driver. The only thing missing from these new characters as far as I can tell is the typical pirate accent in the English dub.

Regarding extras, there is a Japanese promo, a trailer for Part 2, and textless opening and closing. The ending song, “Enter Enter Mission”, is the same that has been used in previous Girls und Panzer releases. The opening is a new piece, “Grand Symphony” sung by Sayaka Sasaki, and is pretty good.

Part 1 of this final collection has been good and I’m looking forward to Part 2. 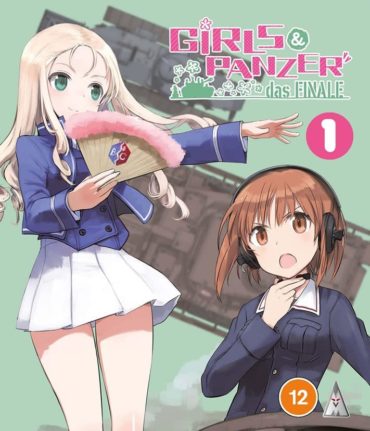